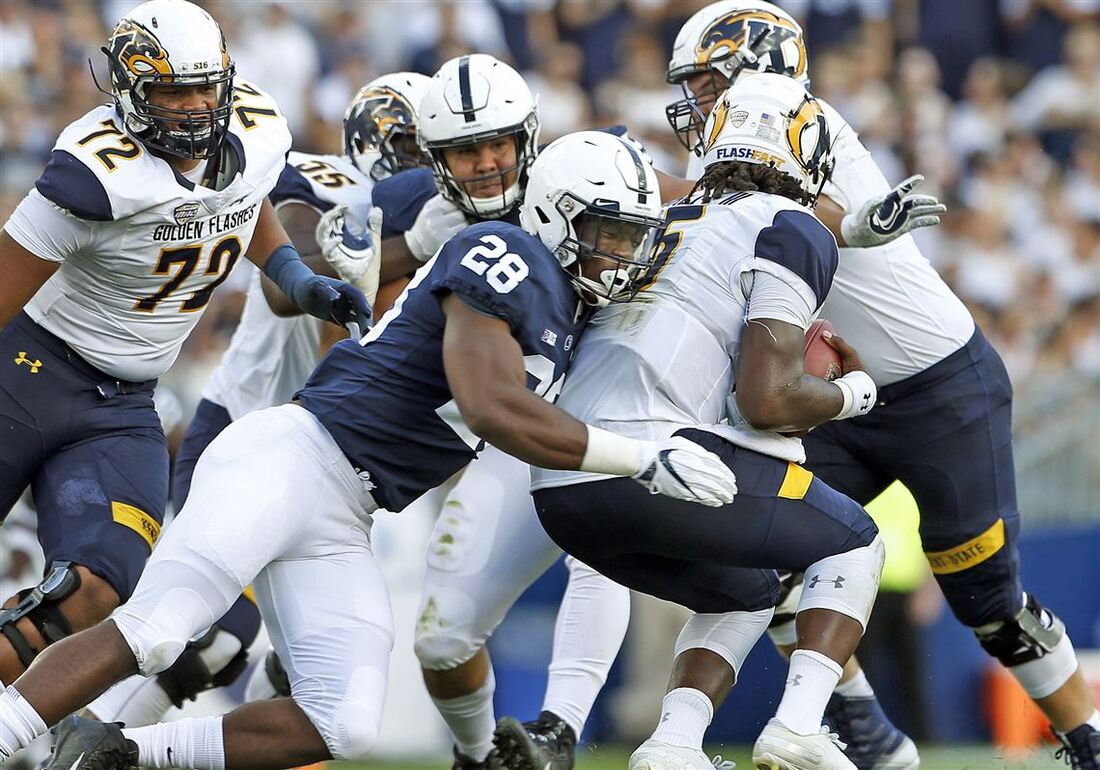 The rumors that have come out of Penn State about Jayson Oweh's athleticism are scary considering that at his 6'5" and 255 lbs. frame he can run in the mid 4.3's in the 40 yard dash. He's got an excellent first step off the line of scrimmage and comes at offensive tackles with great pad level. He's got prototypical size for an edge rusher and is effective playing with his hand in the dirt or as a stand-up pass rusher. His elite level speed is noticeable on tape, especially in pursuit. Not easily pushed off the line of scrimmage and does a good job of holding his end on the line. Excellent change of direction skills and explosiveness in his feet to redirect and pursue very quickly. Does a great job powering through blocks and keeping a tackles hands out of his chest. He's a sure handed on the edge and does a a great job of wrapping up his man and bringing them down. He's one of the only front 7 players in this draft that I am confident is athletic enough to run down any ball carrier as he possesses phenomenal pursuit speed. He's extremely flexible at his size and has shown little issues with ducking his shoulder and bending the edge. He has lightning get off at the snap and can cause nightmares for offenses that can't account for his speed. He's a patient edge rusher who does a good job waiting for plays to develop before biting hard. He's an aggressive hand fighter and showed in 2020 to have developed an effective rip move. He has great strength in his upper body and can bring a lot of pop behind his hands when he engages offensive lineman. He's ridiculously agile for his and has shown the ability move down the line of scrimmage with ease as well as make open field tackles.

He's as raw a player as you'll find in the draft while some have him pegged as a sleeper Day 1 pick based on his potential, I am not buying it yet. He still has no rush moves in his repertoire outside let alone any counter moves in his game. While he comes off the line with great pad level, if he gets caught, he never reestablishes himself. His motor on plays is questionable because while he has many plays of him chasing ball careers, there are many as well of him giving in too easily. His power is questionable but more so because he doesn't utilize his power enough in his game. No coverage experience at all but that's not likely to be his task in the NFL. He's only played 20 college football games and had 0 sacks in his last 7, all of the 2020 season, and his lack of production in college is extremely concerning. He has played with an extremely talented defense with Micah Parson's this year and Yetur Gross-Matos in 2020.

He's a question mark as a prospect based on the lack experience but I need to see him on the field more to feel more confident in calling him a good prospect. Hundreds of freak athletes win the weight room workouts have come through the NFL and many have fallen out of the league and no matter how fast or strong Oweh is, if he can't perform on gridiron, he's not worth a hefty investment. He's a boom-or-bust prospect and will need significant coaching up early in his career to be productive. The skies the limit with and the abyss is his floor and it's all going to depend on his situation for his career.