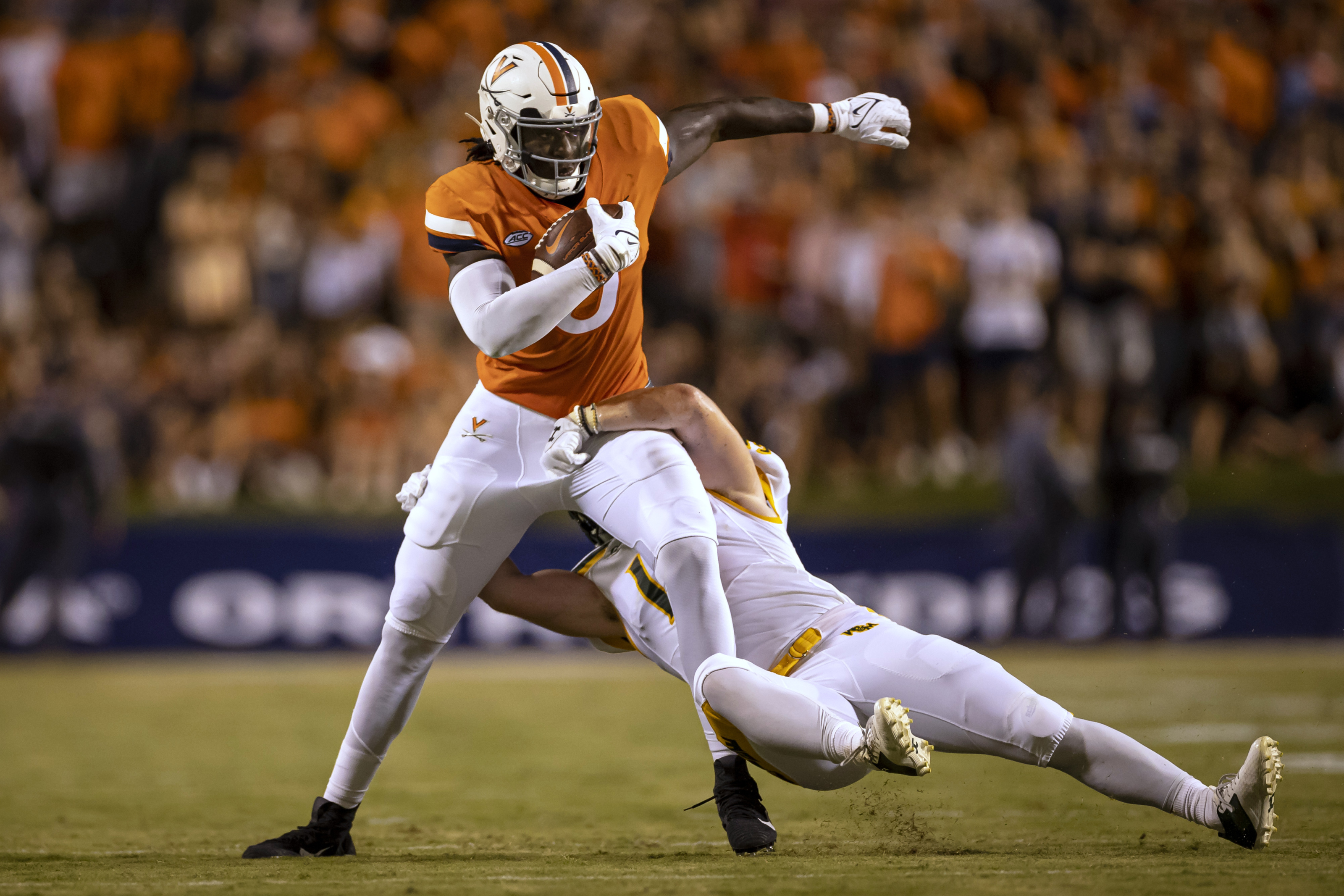 Photo by Scott Taetsch-USA Today Sports
Jelani Woods is the most freakish athletic specimen among tight ends in the NFL draft and might be one of the most athletic players period once the combine is over. At 6'7" and 260 lbs., Jelani Woods brings freakish size, elite athleticism, and exceptional playmaking ability. He possesses elite length and size for the tight end and he certainly used that to his advantage when it came to coming down with contested catches in traffic as he can turn into an NBA center in the box and simply bully guys for the football. He possesses elite speed for his size and it certainly puts many defenders off guard with his ability to turn on the jets and run downfield. He has an elite catch radius at his size and if you're a quarterback with accuracy issues you have to worry about threading the needle with him. He's creative as a route-runner with his ability to fool defenders with his speed and if defenders aren't careful about his ability he can certainly torch them at the top of his routes and get separation. When he gets a head of steam with the ball in his hands he can torch defenders deep with ease and teams are always looking for tight ends that can wreak havoc on defenses if given the opportunity. He's highly effective after the catch as his immense size and athleticism allows him to break tackles with ease and occasionally put the moves on defenders in the open field which he did with great effectiveness. He's extremely difficult to be tackled 1-on-1 in the open field as he will turn into a bucking bronco and truck incoming tacklers, stiff arm corners, and drive his feet through tackles that often result in him picking extra yards after contact which resulted in plenty of first downs. If you hit him high you'll likely find yourself bouncing as he possesses a rocked up muscular upper body that can take hits and stay upright. He's an absolute nightmare to cover in the red zone with his size and athleticism and he's shown that he understands how to read coverages and find holes in zone defenses which allowed him to be highly productive for his team when it came moving the chains and putting points on the board. He's made the most out of his opportunity at Virginia going from wide receiver to tight end in his final season and it shows his high football IQ and competitive spirit to turn his dire situation into a fruitful one.

He's only played one year at the tight end position which certainly shows up in his blocking ability. His hand placement when attacking defenders both in-line and in the open field mitigates his power to drive defenders out of the way and has often led to getting pummelled occasionally. His immense size so far in his career as a blocker has been his curse as he has trouble getting low and getting leverage against edge rushers and linebackers and needs to correct this issue in order to be an every down tight end. Not much pop at the point of attack and needs to unlock that same nasty streak that has made him so difficult to tackle. His route-running is a work in progress as he can find himself leaning into his routes and not getting enough separation from his opposing defender. He relies too much on his athleticism to make and while it's certainly nice to have his ability, his speed, strength, and size won't matter much in the NFL. His hands are natural when it comes to catching the football and too often can juggle passes a bit and learning how to secure catches and reel them into his frame will make him a more dangerous player. His top heavy frame doesn't help his balance and ability to keep his feet after making contact and if he's down below it has proven to be an effective way of getting tackles against him.

Jelani Woods after the combine should find himself under a microscope by all 32 teams because his freakish size and athleticism is certainly enticing to teams in need of a tight end. He's got all the tools to be a phenomenal NFL tight end and his raw technique as both receiver and blocker are coachable issues and he could be a great project for tight ends coach in the NFL. If he hits as a prospect he'll be a high reward player and a team certainly in Day 2 of the draft in need of a tight end will want him. He's got starter potential in his career and with the right offensive system he could be a high quality tight end in the NFL.