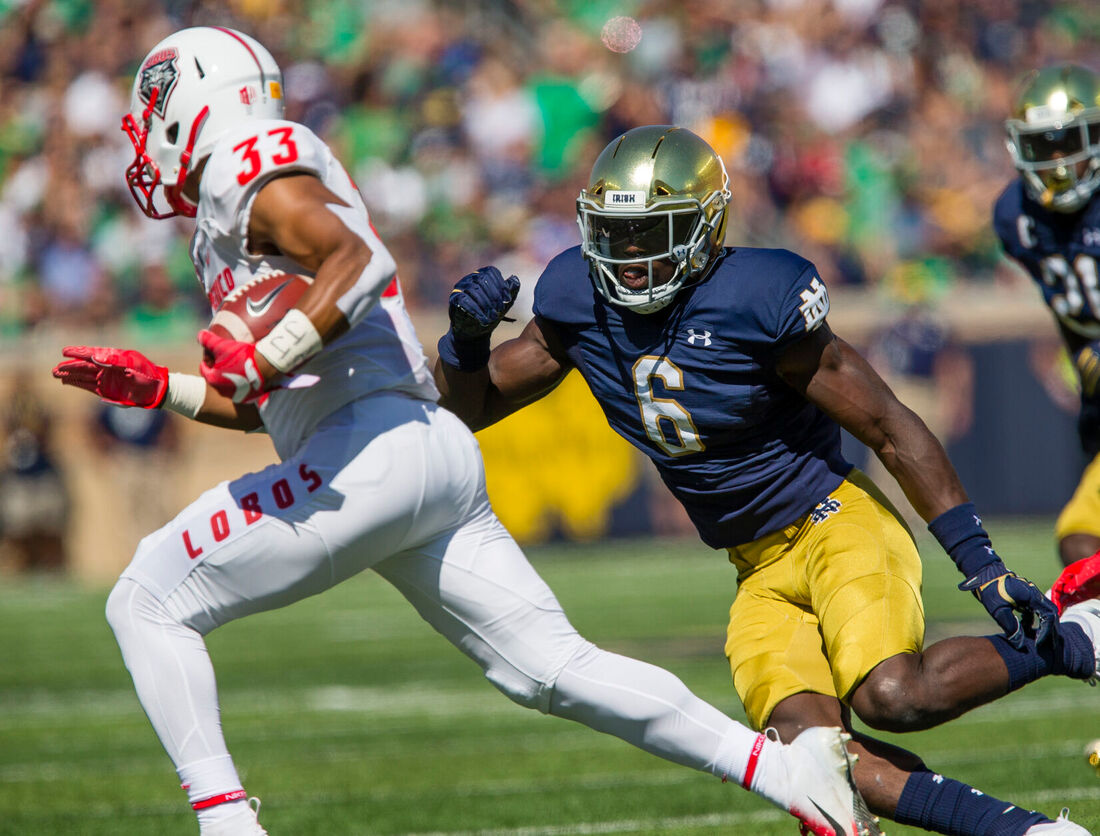 Jeremiah Owusu-Koramoah burst onto the scene last year for the Notre Dame defense by tackling everything that moved and doing so with force. He's muscular 6'1" and 215 lbs. with freakish speed and physical style of play. When he has his sights on a ball carrier he will missile into them with tremendous force, often knocking backwards and revving up his fellow defenders. He's a menace in run support with his ability to run from side-to-sideline effortlessly. He's a tremendous blitzer who has a natural feel for holes opening up in the offensive line and times his burst perfectly. He has very long arms for his size which helps him dive and tackle ball carriers that are evading him. His agility and speed make him a great pursuit player and his tackling angles on ball carriers have saved the Notre Dame defense from big plays. Not easily blocked by tight ends and running backs and does a good job of following the play and shedding rather than going through his man to start chasing. He's used a lot as a QB spy on the Notre Dame defense and has given dual-threat QB's second thoughts about testing him. In pass coverage, he's been a great linebacker when playing man coverage, often on tight ends on seam routes, as he has no issue keeping with them down the field. Does a good job of getting his hands into the catch and creating added difficulty on throws. He's very good at punching the football out of the ball carrier's hands and causing fumbles. He possesses a very high football IQ and never seems to be too far from the football at the end of the play. He possesses a great motor and never seems to run out of gas.

His size is very concerning for a linebacker at 6'1" and 215 lbs. and I am not sure he'll be able to handle the rigors of playing NFL linebacker every play. He makes his money on his speed and explosion but when a situation calls for strength he struggles. He has a difficult time making tackles on bigger ball carriers and can find himself getting dragged for extra yards. As a blitzer, he has trouble with bull rushing running backs that pick him up and doesn't know how to effectively get by blockers if they catch him.

​ I think he would thrive in a 4-3 defense as a SAM linebacker with his speed and agility and should certainly garner attention from teams. His lack of experience could be seen as a positive by some as he still might have more growth to go. If he can put some more muscle on his body, at least 20 lbs., he will add more years to his career as well as make him a more versatile prospect.