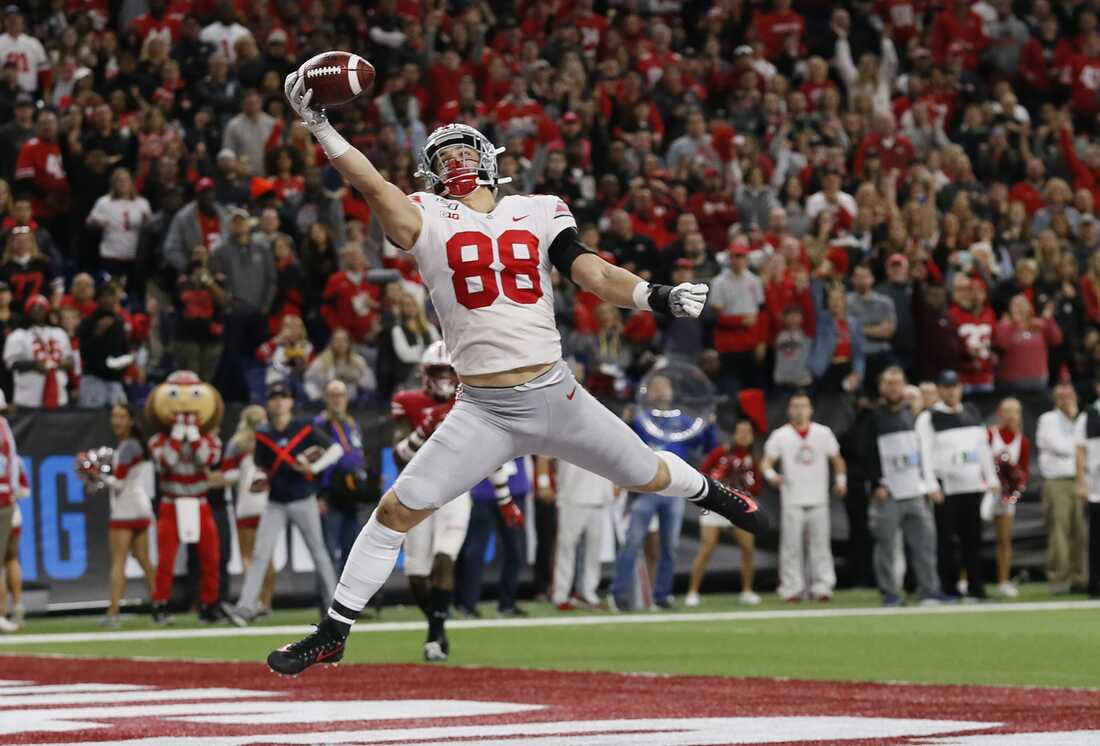 Photo by Adam Cairns-Dispatch
There probably isn't a more underutilized prospect in the draft than Jeremy Ruckert and what he has done with the limited opportunities given to him by the Ohio State offense is an accomplishment unto itself. At 6'5" and 255 lbs., Ruckert possesses exceptional athleticism and power. The stat board won't do Ruckert any favors in the draft but anyone who has at least one eye and half a brain could see the talent and potential he has, unless you're an Ohio State coach apparently. His athleticism is easy to see when he has some green grass in front of him because he can gain ground very quickly. He possesses exceptional hands that unfortunately have been hard to see due to their lack of usage but he can pluck the ball out of the air with two hands and at times just one, as you can see by the photo I chose to use. He has a large catch radius and should be a favorite player for quarterbacks to target if the pressure starts to get close. He's been a viable option for Ohio State on contested catches with size and power to bump defenders out of the way on 50/50 balls. He's very willing to make catches in heavy traffic that often can result in him getting popped by safeties and he's very good at holding onto the football during collisions. He's the best blocking tight end in the draft and I don't believe there to be a close second which is probably why Ohio State preferred to use him as a blocking tight end far more than a receiver because he's a bruiser in the run game. He comes off the ball with immense power and aggression whether playing with his hand in the dirt or standing up at the line and can be a mauling run blocker when he gets his opponent off balance. He takes excellent angles in the open field when blocking linebackers and defensive backs and can drive them out of the play quickly. He's very good at chipping pass rushers and blitzing linebackers off the edge which helped his quarterback C.J. Stroud have more time in the pocket. When asked to block edge rushers one-on-one he shows up and gives his all and even though he will get clobbered He plays through the whistle and his willingness to do the dirty work, like blocking or running routes to open up opportunities for his receivers, no other tight end in college football would be caught dead doing for Ohio State and his effort in such a menial role on offense is truly remarkable.

Jeremy Ruckert's issues are rare for a draft prospect because while he has decencies as a route-runner it's to tell their extent based on his limited opportunities. He's not a polished route-runner by any means and he'll need heavy coaching in the NFL to get him there. Unless he has green grass in front of him, I wouldn't expect him to be making people miss in the open field and creating YAC plays for the offense. Tight ends in recent coming out of Ohio State have flamed out early and often in the NFL and while this may not ring true for Ruckert considering he's his own man as a prospect the Buckeyes lack of use for him in the passing game will likely scare off teams. His route tree is questionable as well with how little opportunities he was given in college and he'll need to impress in workouts in order to build confidence.

Last time I can remember a tight end with this level of misusage for a tight in college was Iowa Tight End and 2017 5th round draft pick George Kittle whose without a doubt the best tight end in the NFL and while I certainly am not comparing him as a player, although they were both considered blocking tight ends that offered little as receivers according to scouting reports, they both have a similar draft dilemma that worked out very well for Kittle. Ruckert's athleticism, blocking, and work ethic are what's going to get him drafted but where is going to have to be determined by his combine, senior bowl performance, and private workouts because he needs all three in my opinion to guarantee he hears his name called. I think he's Day 1 starter in the NFL with the potential to be a quality player for over a decade.