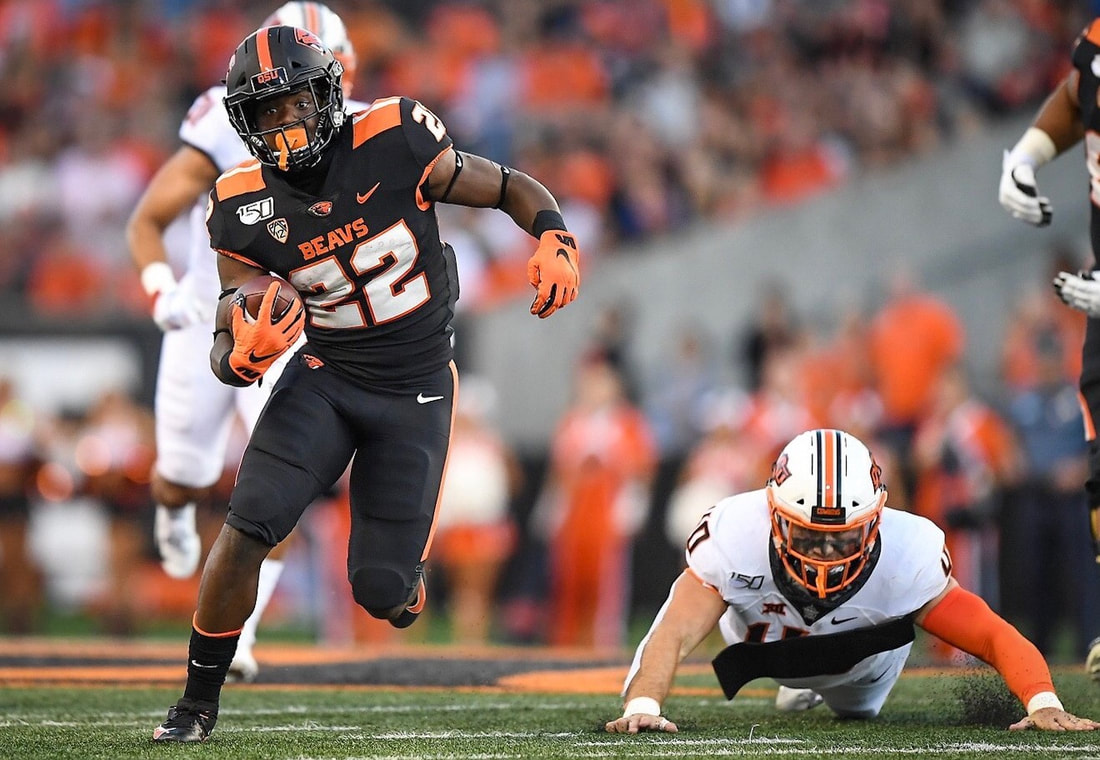 Jermar Jefferson has been one of the most elusive running backs since his freshman year and should bring a lot of attention to him in workouts. He brings a very compact and muscular frame at 5'10" and 215 lbs. as well as surprising quickness with his size. He's very good at making people miss either in tight spaces when attacking the line or in the open field when one-on-one. He possesses a very effective jump cut that can leave broken ankles and he's very good at stutter stepping, keeping defenders on their toes. He possesses excellent balance in his feet and does a good of getting hit and keeping his feet under him. He's a fighter when getting tackled and he makes it a tough task to bring him down one-on-one. He's one of the better backs in this draft at maneuvering himself to fall forward. He possesses a good stiff arm that's quick and powerful when making contact with defenders. He possesses very good ball carrier vision and can find the open hole when running between the tackles. He possesses excellent hands as a receiving threat and does a nice job of finding open spaces in a defense in order to maximize his potential on passing downs. He's one of the best in the draft at nothing into something with more than a highlights involving him eluding TFL's and picking up a positive gain. He has very good ball security and does a great job of holding onto the ball through traffic.

He doesn't possess the top end speed that's going to make him a consistent homerun threat in the NFL and has on more than one occasion in college football gotten run down with daylight in front of him. He can lower his shoulder but it's not his forte  and will likely limit his ability to play in tough yardage situations. Mainly useful on screen plays and wheel routes on passing on downs but has potential to learn more routes. While he does have good balance, he can be susceptible to shoestring tackles and fall down. His discipline when attacking the line of scrimmage is concerning because he's too eager to cut back out of the hole and roll the dice at finding his own. He doesn't possess the very good blocking technique and has issues with picking up blitzers and engaging them.

He's a change of pace back to start his career with the potential to become something more. I think his ceiling in the NFL is limited but I can certainly see him making the roster and providing an NFL team with a very surgical running approach. If he can fix his issues with his discipline then he may have a shot in the NFL at being a starting back.