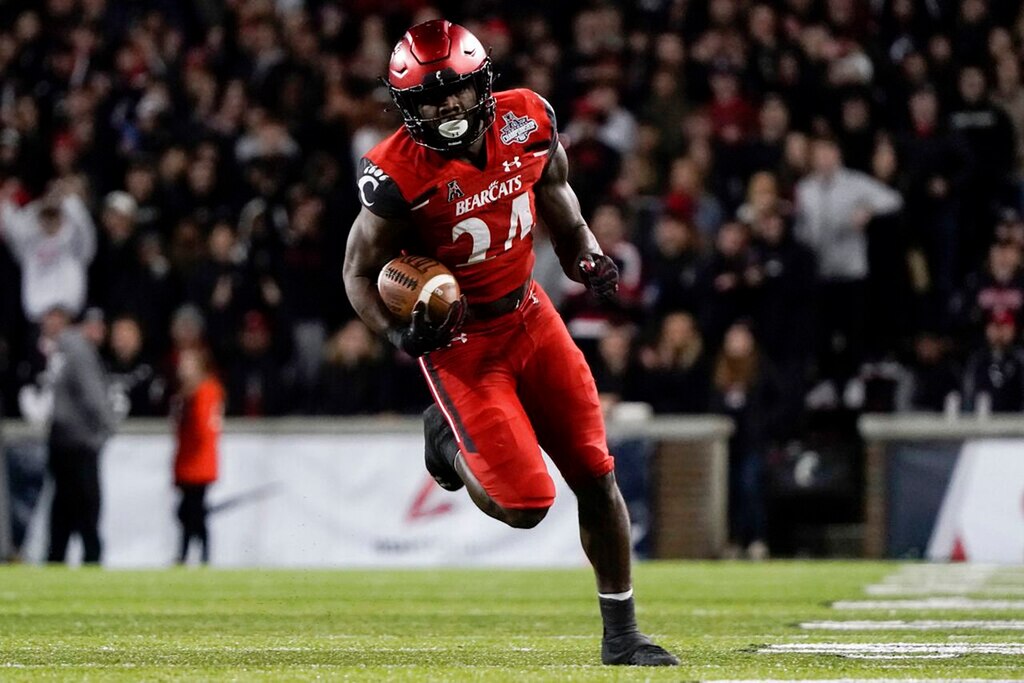 Photo by Jeff Dean-Associated Press
The Cincinnati Bearcats were one of the biggest surprises of the 2021 college football season and the biggest reason for their offensive success was running back Jerome Ford. At 5'10" and 210 lbs., Ford brings exceptional athleticism, ball carrier vision, and a tenacious running style. Jerome Ford is one of the most explosive running backs in the NFL draft and he showed at Cincinnati that he can turn any hand off into an 80 homerun if he finds daylight in the line. He charges at the line of scrimmage with speed and explosiveness looking to attack the trenches and pick as many yards as possible. He possesses great ball carrier vision in the line to weave through blockers and tacklers like a mouse in a maze. He possesses that second gear to breakaway and burn defenders downfield when he gets an opening and is very difficult to catch up to at full speed. He's not a running back to give up on a hole early and break away and can be trusted not to freelance and play hero ball for his team. He hits the hole with rage and tenacity and you can be sure that he'll leave his mark on a defender's helmet if they're in the way. Ford has proven to be deadly out in space against tacklers and has helped yield big runs in his career. He has an extremely quick juke move that has put a lot of defenders on the ground and his excellent agility and quickness in his feet allow him to string evasive maneuvers together quickly. He's a slippery runner with good lower body strength to run through weak arm tackles and churn through contact to pick up as many yards as possible. He was a highly successful short yardage back in 2021 as he did a nice job of identifying a hole opening in the trenches and using his natural explosiveness to attack the hole in the line. His constant agile movements make him a difficult running back to square up and tackle which has often led to missed tackles from incoming players and big runs. When he gets hit he does a nice job of keeping his feet and continuing to run with great toughness and contact balance. He has good receiving ability in the passing game with sufficient hands and enough athleticism and quickness to become a versatile piece on offense. He has had a very light workload in his career and no injuries to speak of which bodes well for projecting his longevity. His play against Alabama was eye opening for the nation because even in a losing effort, Ford played his ass off to show up his former team. Ford is a tremendous competitor and a tough football player and teams looking for a potential Bell Cow will appreciate his style of play and mental make-up.

His ball security has been an issue in his college career with 6 fumbles in just over 400 touches in his career and NFL teams are going to have to coach him heavily to improve this issue. In pass protection, he struggles with diagnosing blitzers coming through the trenches and if his quarterback in Desmond Ridder wasn't so athletic he probably would have been brought down a lot more. He's a little top heavy as a running back and his ability to power through the trenches for short yards in the NFL could be an issue in his career. Not an overly creative runner of the football and will run behind his blockers to a fault. He hits the backside of his line a little more often than you would like to see a back do so and learning when to cutout of his lane with better timing will serve his career. Needs to learn some basic routes to become more of a receiver threat and allow him to be a viable option as a 3-down NFL running back.

The Cincinnati Bearcats don't make the college football playoffs without the play of Jerome Ford in 2021, it's as simple as that. Ford is a tenacious and rugged NFL running back prospect who will put the team on his back if necessary to win and although he has some flaws and shortcomings to his game, you can't teach heart and will to succeed. If he can learn some routes and work on his blocking as a running back in blitz pick up, a team could be a highly reliable starter at the running back position.