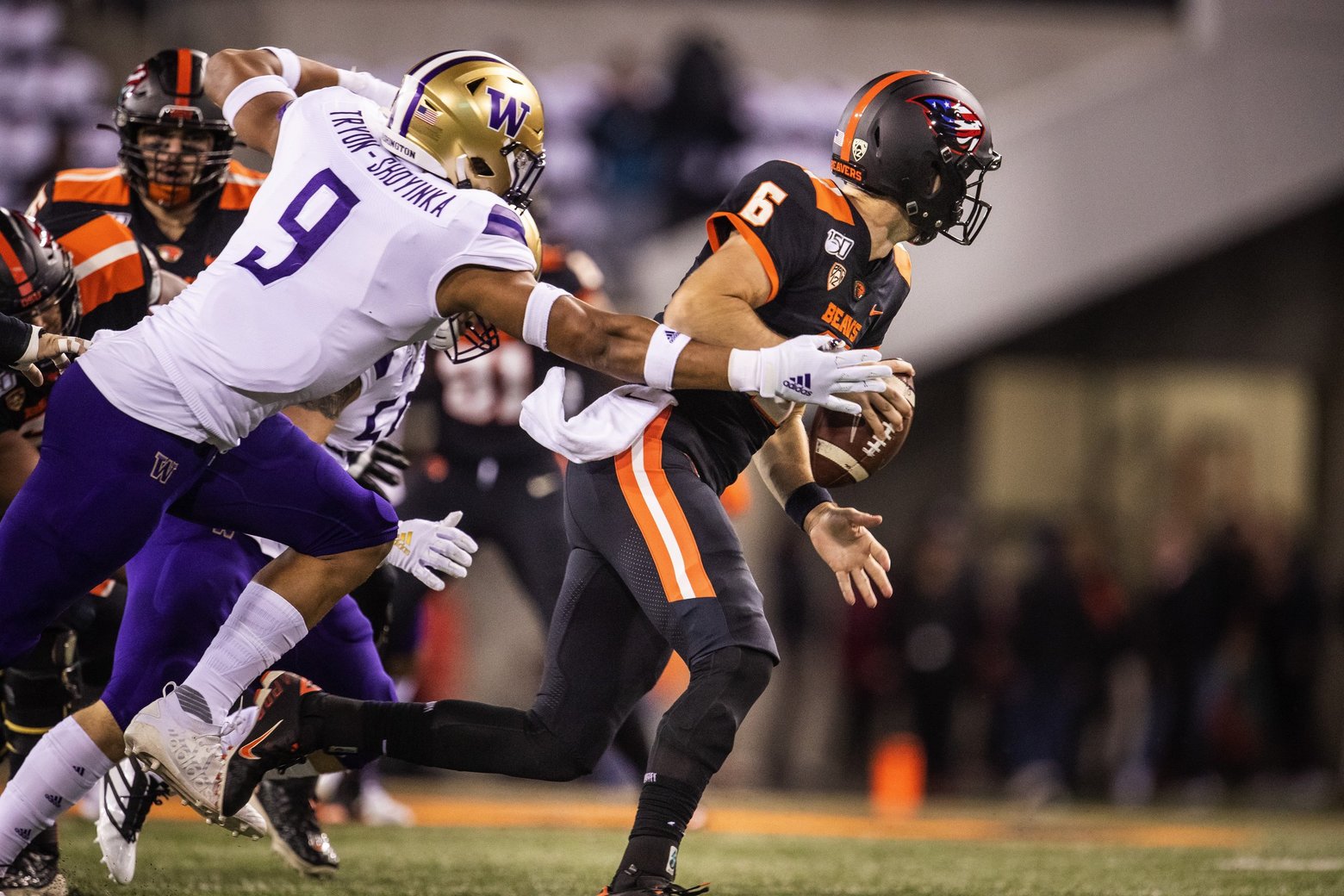 Washington might have a potential defensive star in Joe Tryon because he had a tremendous sophomore that saw him terrorize offensive lines throughout the PAC-12. He's got a wicked first step at the snap of the football and great size for an outside linebacker at 6'4" and 250 lbs. He has exceptional speed and quickness for his size and can turn any offensive tackle's day into a nightmare. He has a mean streak and if he gets to the quarterback he will leave his mark. He can play with his hand in the dirt or standing up and is effective from both stances. Has good instincts and awareness of where the play is going and always seems to be around the football. He has very good power in his frame and doesn't get moved off the line easily. He has good lateral agility and has no issue moving down the line to make a play. He has elite length in his arms to outreach offensive tackles and disrupt passing lanes. Strong hands to grab and bring down quarterbacks and running backs. Plays with menacing intensity and has a non stop motor. He's very flexible and has shown little issue with bending the edge and squeezing through blocks. He has more than enough speed to chase down ball carriers that try to turn the corner on him and rarely can't make the play. He's a dangerous twist and stunt player who can wreck a play quickly if left unchecked. He brings a lot of power behind his punch and can uproot offensive lines that leave their pads open to him.

His overall technique has to be better as a pass rusher because he simply relies on his athletic ability far too much. He comes out of his stance way too high which gets into trouble often against offensive tackles. His hand fighting technique is non-existent it seems and doesn't do a good enough job of keeping a lineman's hands out of his chest. He utilizes pass rush moves rarely, simply relying on his top level athleticism to get into the back field. No counter rush moves in his arsenal which can end plays for him early. Doesn't get his hands up enough to disrupt passing lanes when he loses his battle with lineman. Run defense is inconsistent on play action and read option as he can sometimes look to get the sack and leave his gap behind. He has benefited somewhat from playing alongside a very good college defensive interior line which means he gets left alone, however he's still their best player on their line.

He's got an exceptionally high ceiling as a pass rusher given his elite level athleticism and size, but he possesses a very low floor based on his disregard for consistent use of basic technique. He needed to prove in 2020 that he can put moves together, play with more consistency, and get more discipline in his game but his opting out eliminated any chance for scouts to see what he can do. He's going to need heavy coaching once he's in the NFL but he has major potential to be a starter early in his career.