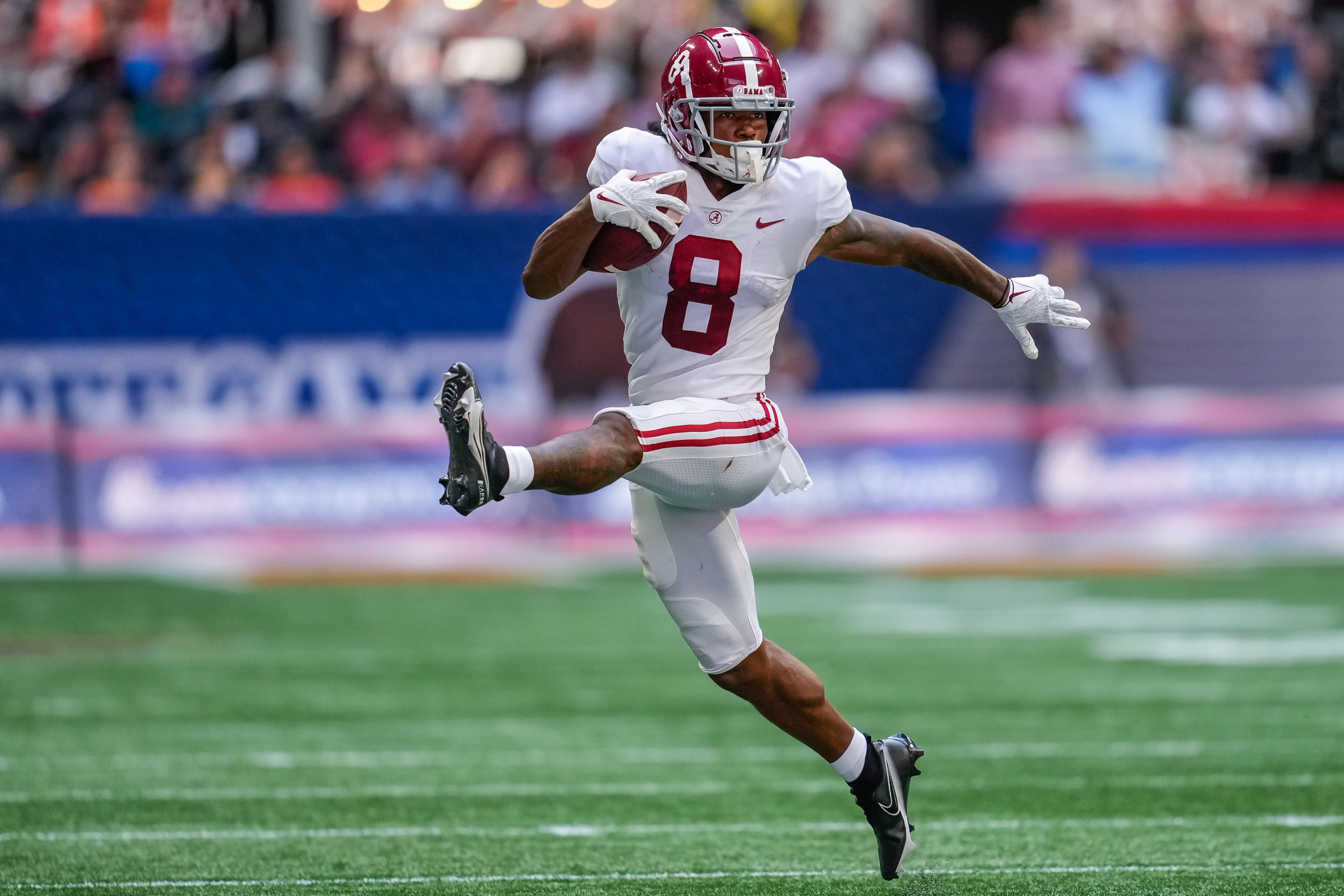 Photo by Dale Zanine-USA Today Sports
Alabama once again produces two high profile receiver prospects into the NFL draft with both John Metchie and Jameson Williams and while Williams was lightning on the Alabama passing attack his counterpart in John Metchie III was certainly thunder. At 6' and 190 lbs., Metchie brings elite athleticism, playmaking ability, and rare toughness for a receiver his size. Like all Alabama receivers these days, Metchie is an elite level athleticism specimen that can burn corners if he catches them off guard and there are plenty of highlights of him taking short passes to the house. He's a highly versed route-runner that can make plays at all three levels of the field and he possesses a very large route tree to keep corners guessing. He gets excellent separation at the top of his routes with his speed and twitchiness and will be a nightmare for corners that can't keep up with him. He does a nice job of securing passes through contact and can be very reliable on the boundaries with his ability to toe-tap on the sideline. He's highly versatile as a receiver with snaps literally every for the Alabama offense including outside, in the slot, as a motion man, and even on reverses. He's elite athleticism can be seen once he has the ball in his because he can make defenders, find holes to run through on defense, and can lower his shoulder and break tackles which is something he did often for the Crimson Tide. He was Bryce Young's best friend at times when he got into trouble in the pocket as he's very good at doubling back and getting open for his quarterback as a safety valve. He's a tough SOB on the Alabama offense who's actually one of the best blocking receivers in college football because he will engage with ferocity and aggression and he's even caused a major forced fumble in his career by leveling a defender after an interception, check Metchie's game against Florida in 2020. He's a clutch receiver who came up big for Alabama against Auburn after a total slugfest by the teams occurred that locked Alabama in as a college football playoff team.

Unfortunately like his counterpart Jameson Williams, Metchie tore his ACL as well against Georgia in the SEC championship and like Williams as well he relies heavily on his speed and quickness to make plays on the field. His injury likely takes a big hit to his draft stock with his likely unavailability for most of, if not the entirety, of his rookie year and teams are going to half to monitor his knee and make their decision on how they believe he'll recover. Metchie has the tendency to catch passes with his body rather than his hands and will need to develop more consistency at plucking the football. His tough and rugged style of play at the receiver position, while admirable, could be an issue in the NFL at his size and durability could be an issue down the road. He played on an immensely talented offense with Jameson Williams on one side of the field, Bryce Young throwing him the football, a monstrous offensive line giving the offense lots of time to throw and a running back in Brian Robinson that can run over defenders if need be which leaves Metchie often 1-on-1 in soft single coverage. His catch radius is short compared to other players his size and he may need an accurate quarterback in his NFL career to help maximize his potential. Not the betting favorite on contested catches and doesn't possess the build to be dominant on 50/50 balls. Deep balls have been somewhat difficult for him at times especially when it comes to tracking it in the air as well as turning around in a timely manner to adjust to throws. He was Alabama's #2 receiver behind Jameson Williams and often played against a team's second best cornerback.

If Metchie hadn't injured his knee he'd likely have been a late Day 1 early Day 2 pick in the NFL draft but now that he suffered it and needs to recover it kind of puts his stock in a bit of a tailspin. NFL teams are going to need to see the forest through the trees with him because if he can recover and get back into playing shape, he could be a good receiver in the NFL that brings both versatility and explosive plays to an offense. He's likely a slot receiver in the NFL to start out his career but I certainly can see him transitioning to the outside. If his knee checks out and he recovers fully, he could be a dangerous weapon in a creative offense.