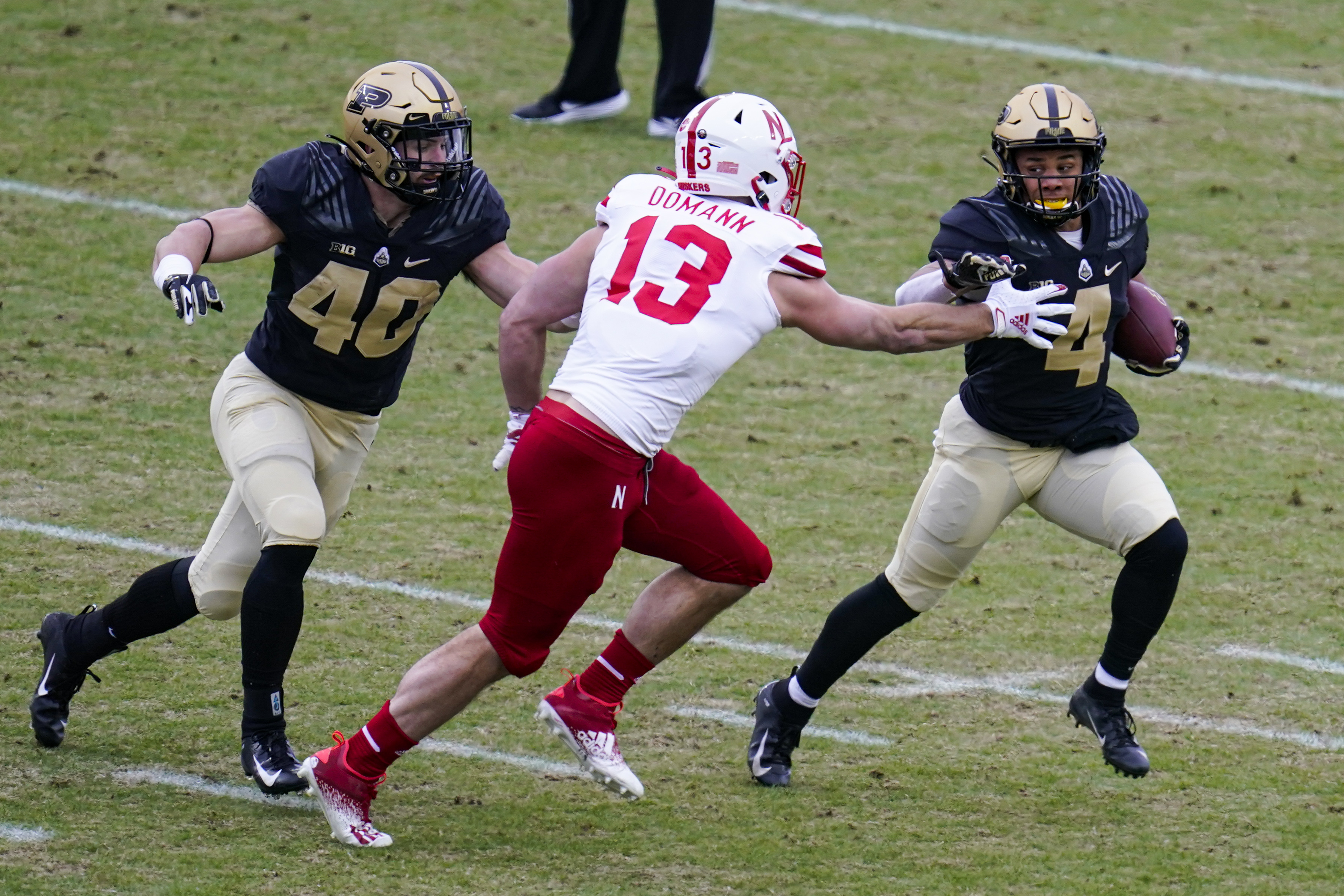 Photo by Michael Conroy-Associated Press
Jojo Domann is one of the most technically sound linebackers in the NFL draft with plenty of snaps under his belt and he was a consistent playmaker for the Cornhuskers his entire career. At 6'1" and 228 lbs., Jojo Domann plays with a phenomenal football IQ, good athleticism, and tremendous tenacity. As a run defender, he plays with exceptional instincts and is usually at the bottom of every pile bloodhound level nose for the football. He does a great job of reading the offensive line movements and meeting the running backs in the hole rather than having to play catchup. He's a punishing tackler that does a great job wrapping up and bringing down ball carriers quickly. He's very good at keeping his shoulders square with his target as a tackler and rarely gives an inch once he makes contact. He's proven to be a fumble causing machine in his career with nine forced fumbles and none of them happened by accident based on his film which is a testament to his technique and football IQ. He's an extremely aggressive blitzer in run defense and when he attacks the line of scrimmage he has shown surprising power in his frame to rock offensive up a bit and perform a nice stack and shed technique to attack the running back. He's proven to be an effective blitzer when attacking the backfield and knows how to weave through traffic in the trenches to impact the backfield quickly. As a pass rusher, he displays good first step explosiveness from behind the line and when he's going forward he can certainly squeeze through gaps in the line and attack the quarterback. He has a nice ability to duck under blockers when attacking the quarterback which is helped by his shorter size and his power in his frame allows him to hold his ground when getting pass protected. In coverage, Domann clearly displays exceptional ability to read routes and diagnose plays quickly. In zone coverage, he's very good at limiting any false steps when covering his area and has a knack for being in the right place at the right time with three interceptions in zone. He's very good at attacking the football in the air and batting away passes when he has a chance to. He's rarely out of position nor does he find himself getting fooled by quarterbacks trying to look him off to get his man open. In man coverage, he has shown that he can bully tight ends out of position and doesn't get pushed off of by the bigger player showing his level of toughness and work ethic. Domann plays his best when under the bright lights and in his outing in 2021 against Ohio State had a ridiculous nine tackles and an interception which helped keep the Cornhuskers in a close game with their old rival. He's as tough as Teflon when it comes to playing the sport at his size and he's certainly proven to have a high motor and relentless work ethic. He's shown his passion for the game by playing injuries and producing still, had a busted hand in his performance against Ohio State and didn't get surgery until his team was officially out of the rankings. Domman is a mature player who gives tremendous effort to the game both on and off the field and teams drafting him should feel confident that they will get the best out of him.

He's an older player at 24 yrs old and will turn 25 in 2022 and while a few teams might ignore his age, I would imagine most teams would hold it against him and draft a younger player. On top of being older, Domann also has a lengthy injury history with his 2017 season being lost to a season-ending injury and part of his 2018 and 2021 seasons as well being lost due to lingering injuries. He's a little slight in his frame and adding 10-15 lbs. to his frame could further his longevity in the NFL. Not as rangy as some linebackers of his size and often is coming into play clean up rather than making plays. Possesses average burst and explosiveness out of his stance and needs to establish great angles to effectively chase down ball carriers. His lacking arm length doesn't leave him with much room for error when making tackles and if doesn't get squared up with his target, he could find himself on the ground. Has no real value as a pass rusher with his size and length limitations and I expect him to make his living in the NFL as a run defender and coverage linebacker.

Jojo Domann is a tough and rugged linebacker prospect that I can certainly see making an impact in his rookie year. He's got more of a mature feel to him as an NFL prospect whose faults in his game come from things out of his control. If you are a team looking for an impact player in the draft that can come in and start quickly, Jojo Domann can be that guy and he'll likely be available on Day 2. His injuries in college are my only concern if I am a team drafting and I believe that if he plays for a team that has a defense already built around him, he could be a high quality player in his career.