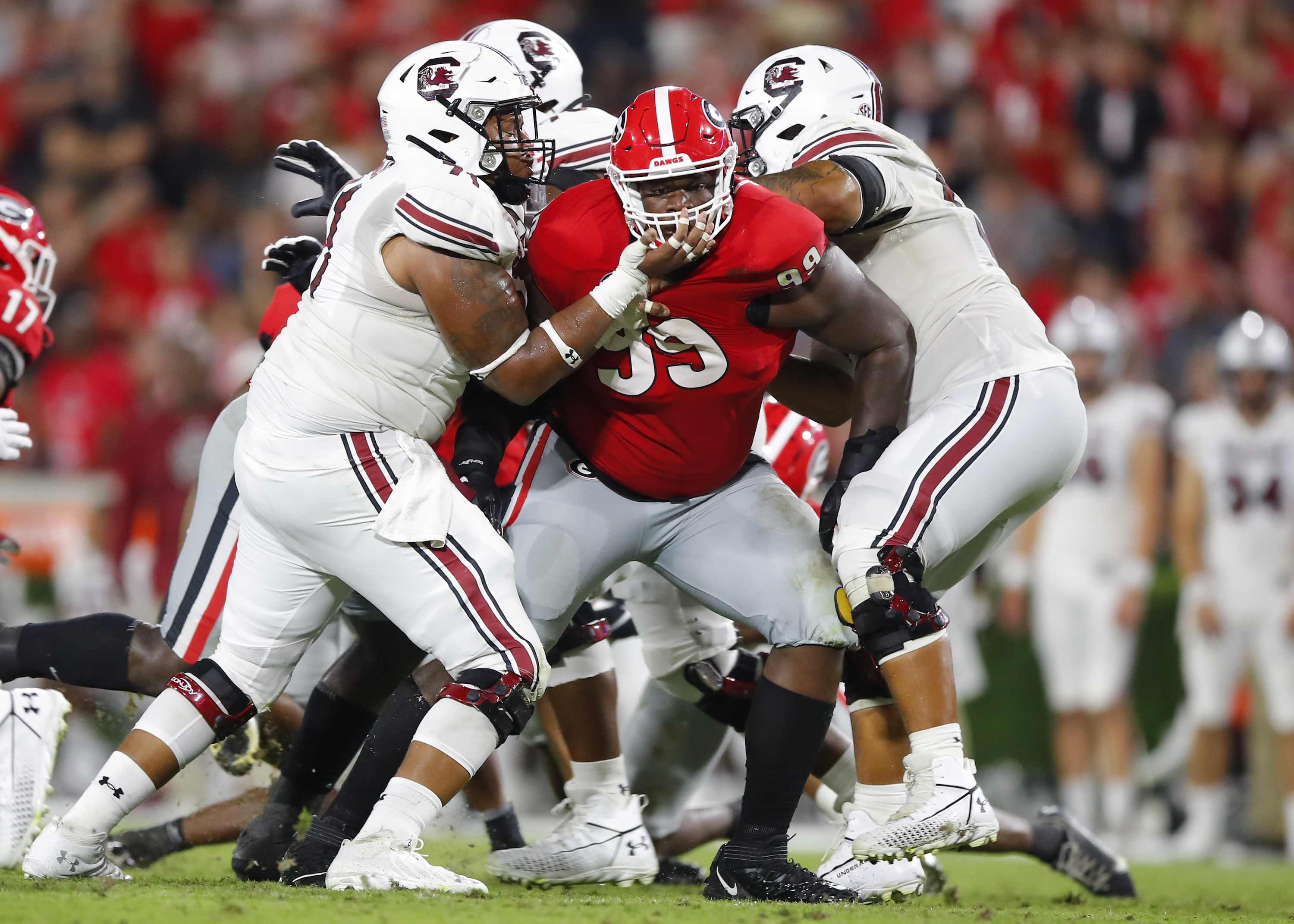 Photo by Todd Kirkland-Getty Images
Jordan Davis has been the anchor for the Georgia defensive line for the past couple years and Georgia's defense has certainly benefited from his play. He's a mountain of a man at 6'6'' and 340 lbs. with a pterodactyl wingspan freakish power and athleticism. He's built very throughout his body with very little dead weight on his frame. He possesses freakish speed and agility for 340 lbs. and it certainly helps him scare the hell out of offensive coordinators who have to game plan for him on the field. He's a rock from the nose guard position who will eat double and triple teams for breakfast, lunch, and dinner. He has a nose for the football and his long arms and strong hands give him a wide one-arm tackle radius in the middle of the line. He has a great first step for a man his size and he makes a huge impact at the point of contact. You can truly see his phenomenal power and athleticism when he bull rushes up the middle because it takes at least two offensive lineman to even halt him. He has a ridiculously powerful punch off the line which stands guards and centers straight up allowing him to collapse the pocket from the inside quickly. His unreal real length in his arms, combined with his power, keep him from getting overwhelmed and taken out of the play. He does a great job of extending his arms and keeping his chest clean from offensive lineman. He plays with extreme aggression and ferocity when he fights through blocks and does a great job of disengaging at the right time to make a play. When single-blocked by offensive lineman, he makes sure to remind offensive coordinators why he demands double teams as he completely obliterates blockers early and often. His game tape from 2020 to 2021 shows a much more technically sound defensive lineman especially with his pad level as he has done a phenomenal job of keeping his pads low off the line and maintaining his leverage throughout the play. His speed-to-power conversion is extremely impressive and has proven to be impossible to deal with when blocked 1-on-1. He’s truly at his best in run defense as his ability to play nose guard is on display. He is an immovable object in the middle of the line and holds his ground consistently in the middle and forces running backs to bounce runs outside if they attempt to run up the middle. His enormous wingspan gives him a very large tackling radius and his vice grips for hands allow him to one-arm tackle running backs if he gets his hand on them. He does a nice job of keeping his base wide when driving and has the agility and nimble feet to move down the line with ease. He’s the best block shredder in the draft in run defense and has enough stamina in his frame to run and chase for a bit. He has lined up in a multitude of fronts for Georgia, mainly as the nose guard however, and has the athleticism football IQ to play in any scheme a defensive coordinator has planned. He has taken snaps as a 3-4 end and 4-3 1-tech defensive tackle and has the ability to play those positions in the NFL. He plays in the SEC against the best offensive lineman in college football and has seasoned reps against NFL talent. He’s a high effort and high motor defensive lineman and is one of best team players in the draft due to his unselfish play at the line which allows his fellow Bulldogs to wreak havoc in the back field. The Georgia Bulldogs feature the defense in college football in 2022 and there isn’t a close second either and the development and play of Jordan Davis is the main reason for their overall dominance, especially when defending the run.

He's a very raw defensive linemen in his technique considering that hadn’t played football till the middle of his high school career. He doesn't provide much of a pass rush as he seems to lack any pass rush moves to break away and create pressure. He doesn’t have any counter rush moves in his game and mainly survives off of his power and athleticism in college football. His timing of the snap can be inconsistent at times and while he has the athleticism to make up for lost time, getting consistency in the NFL is crucial for success. He doesn’t do enough to disrupt passing lanes with his length and size and doesn’t attack the football enough when making tackles.

Nose Guards are rarely a premium pick in the draft unless they have the athleticism and potential to make an instant impact but luckily for Davis nose guards appear to be making a comeback in the NFL if they can be scheme versatile. Jordan Davis might be raw in his pass rush technique and his ability to create pressure in the passing game but his overall potential as a pro bowl defensive lineman in the NFL is unquestionable. However, if he wants to survive in the NFL he will need to continue learning pass rush moves and polish his game more because athleticism, no matter how freaky, will only get you so far in the pros. If he’s put on a defense that allows him to simply eat up blocks and allow him to further develop his game, he could be a very special player in the NFL.