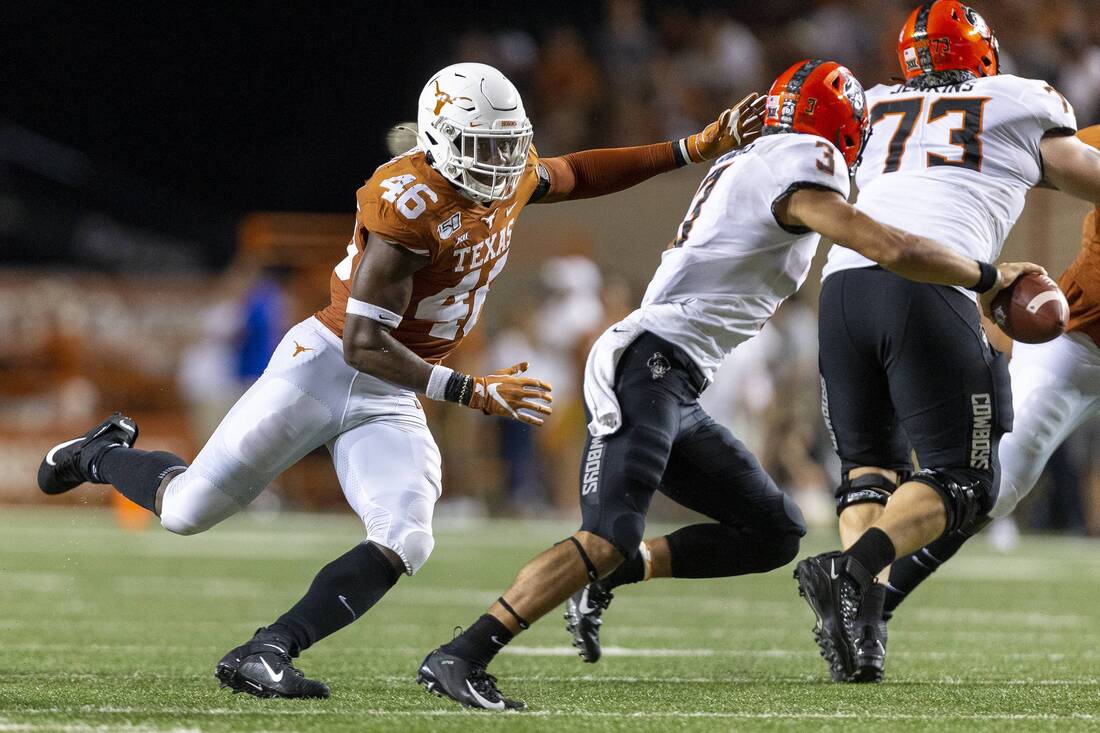 Joseph Ossai made a name for himself in 2020 by establishing himself as the best edge rusher in the BIG-12 for the Longhorns and it wasn't very close. He's a highly athletic 6'4" and 256 lbs. with excellent length and instincts. He possesses a very explosive first step, especially from the stand-up pass rush position, and can shoot by offensive tackles that can't keep. He brings long arms as an edge rusher and he knows how to use them to full effect. He possesses a good repertoire of pass rush moves with a swim move, a stutter step, and swipe move that was highly effective in 2020. He has a flexible build and can be trusted to bend the edge. He has a well developed upper body that is packed with power and when he needs to bull rush lineman off the ball, as long as he can get underneath pads, he can do so with ease.  He's a very fast pass rusher with more than enough speed to chase down quarterbacks and running backs and can change direction on a dime. He has a very well developed counter rush game and knows how to perfectly execute counter rush moves like spin-outs, inside cuts, or stunts inside. He has tremendous instincts as a play develops and knows when to attack. He's a big hitter as a pass rusher and will plant quarterbacks and running backs alike if he gets a shot. He goes after the football when making tackles and sacks and was highly successful at strip sacks in 2020. His explosion from a linebacker stance is phenomenal which could make him a very versatile player with his ability to line up in versatile spots. He understands coverages much more than most pass rushers do to his time early in his career spent at the position. He has very good balance in his lower half to take on chop blocks and recover quickly. He plays with a very high football IQ which is why he has seen such tremendous progress as a pass rusher given his limited time at the position. He's a high motor player who gets better as the game goes and when he's feeling himself, he can be a game wrecker.

He's still a work in progress as a run defender and it starts with his run defending. He's underdeveloped in his lower half and it shows up when he's defending his end of the line. He can fall victim to getting driven off the line and his lack of lower body strength makes it a tough task to halt blocks. He can be far too eager at times to bite on zone reads and play action and can leave cutback lanes open in run defense. His production has mainly come from only a couple games in his career and shows a concerning level of inconsistency in his game. He wasn't very productive when rushing from a 3-point stance and is likely only an option for teams running a 3-4 scheme as pass rusher.

Joseph Ossai, with his previous experience as an off ball linebacker, could be a very versatile chess piece on a defense and could be a very productive pass rusher and blitzer. If he gets paired with a 3-4 scheme in the NFL, he could have a productive start in his NFL career because he's a player that learns quickly and works hard to hone his craft. He has pro bowl potential if he can develop more as a run defender.