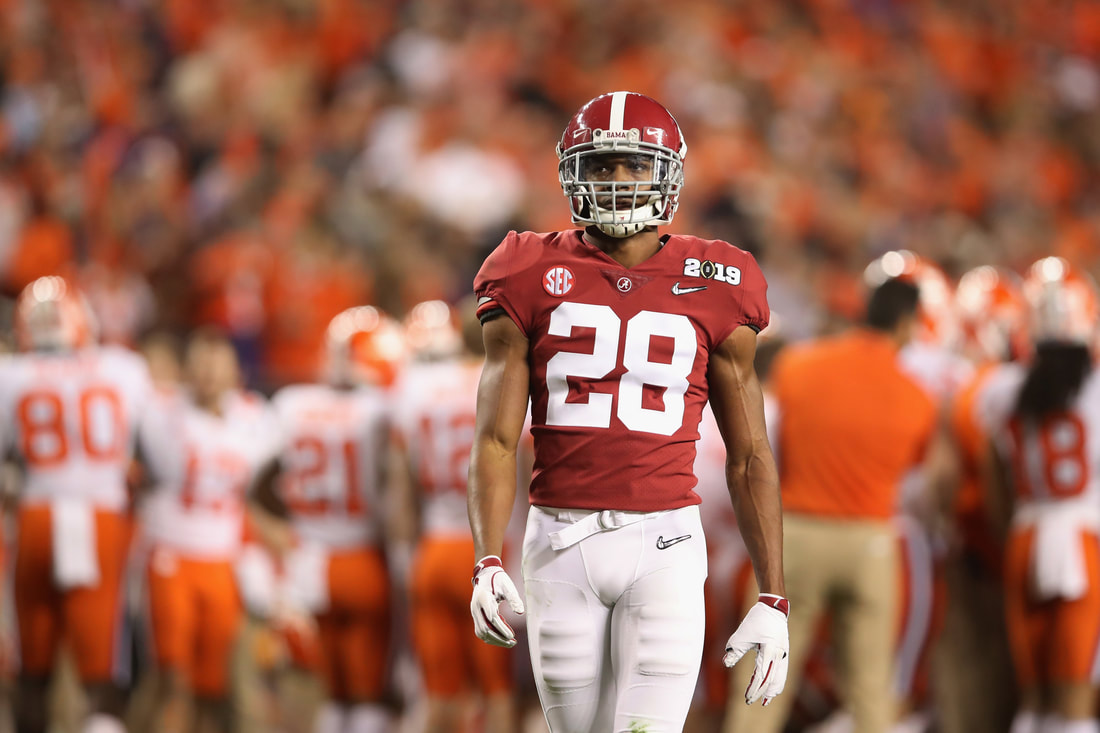 Photo by Christian Peterson-Getty Images
Alabama has always been a factory for NFL talent and Josh Jobe is next in line coming into the 2022 NFL draft. At 6'1" and 192 lbs., Jobe has a brickhouse frame and elite level athleticism. He has phenomenal length in his arms as well as great size for a cornerback and he knows how to use it. In man coverage, Jobe displays excellent speed and agility as well as technique. He plays very low in his back pedal and plays with great fluidity. He has great stop-n-start quickness in his lower half and has good burst on the football. He has more than enough speed to keep receivers deep and doesn't seem to be outmatched athletically by receivers. He is not overly reactive to sluggo routes or quick hitches and does a nice job of staying close to his man in coverage. He does a great job of attacking the football in the air and often forces the incomplete punches with his aggressive punches and scrappy style of play.  He has shown excellent recovery speed if he gets beat and quickly gets back into the play. In press coverage, he plays with ridiculous aggression at the line and he can end routes for receivers early if they can't match his intensity. He does a great job of jamming his man at the line with his great power and length in his arms and often can take smaller receivers out of the play early. He has shown little issues with taking bigger receivers or tight ends, he had a good outing against 2021 #4 overall pick Kyle Pitts, as he matches up extremely well against receivers that try to out muscle him on the field due to his size and aggressive style of play. He's one of the best corners in the draft at riding his receiver towards the boundary line, often shrinking their landing zone on contested catches and causing them to step out. He's very aggressive downfield and he can often jolt receivers out of their routes and force overthrows towards his side of the field. He has good ball skills and while he doesn't always come away with an interception, he's so aggressive at the catch point that he often forces incompletions. While Alabama doesn't utilize zone coverage often, he has all the traits to be a great zone cover corner with his explosiveness, size, length, and athleticism. He's one of the best run defenders among defensive backs in the draft with his excellent tackling technique and rare physicality. Like all Alabama corners, he's a heads up tackler that will bring the pain when he makes contact. He comes in low and heads up to make quick work of ball carriers. He has had success hitting ball carriers when he has a runway and popping the football on the turf. He does a great job of ripping at the football to try and force a strip and rarely finds his tackle getting broken. He's a great blitzer and run defender when attacking the line of scrimmage and is not afraid to dive into the teeth of the trenches to try and make a play. He has plenty of special teams experience and is probably Alabama's best player on that side of the field. He's as high effort and high motor of a player that you'll find in the draft and will give his all for his team. He plays with incredible competitiveness and toughness and can be a tone setter for a team.

He doesn't have many snaps in zone coverage and will likely be pigeon-holed as a prospect. He doesn't hold his zone very well and can get lost in coverage at times, allowing quarterbacks to take advantage. His relentless aggression and physicality is both his gift and his curse because he has a long history of pass interference calls. He's way too aggressive at times down field and if he gets burned, he will grab a hold of the receiver occasionally. He's going to be a 24 yr old rookie when he enters the NFL which will turn teams off who are looking for more youth. His hands aren't great, even among corners, and isn't going to bring in many interceptions in his NFL career. His hip flexibility also gets him into trouble as he has trouble making plays across his body. He's a pure press-man corner coming out of college and will only find success in a scheme that puts him on the outside. He's strictly an outside cornerback in the NFL with his style of play and size and his lack of experience in the slot or at safety in his career severely limits his versatility.

He's a phenomenal athletic talent and ultra competitive player and teams always have room for guys that play like Josh Jobe. He's physicality and aggression are what Alabama cornerbacks are made of and NFL teams love cornerbacks that play with an edge. If he gets paired with a coach that can polish his play up and tone down his aggressiveness in coverage, he could be a starting caliber player in the NFL.