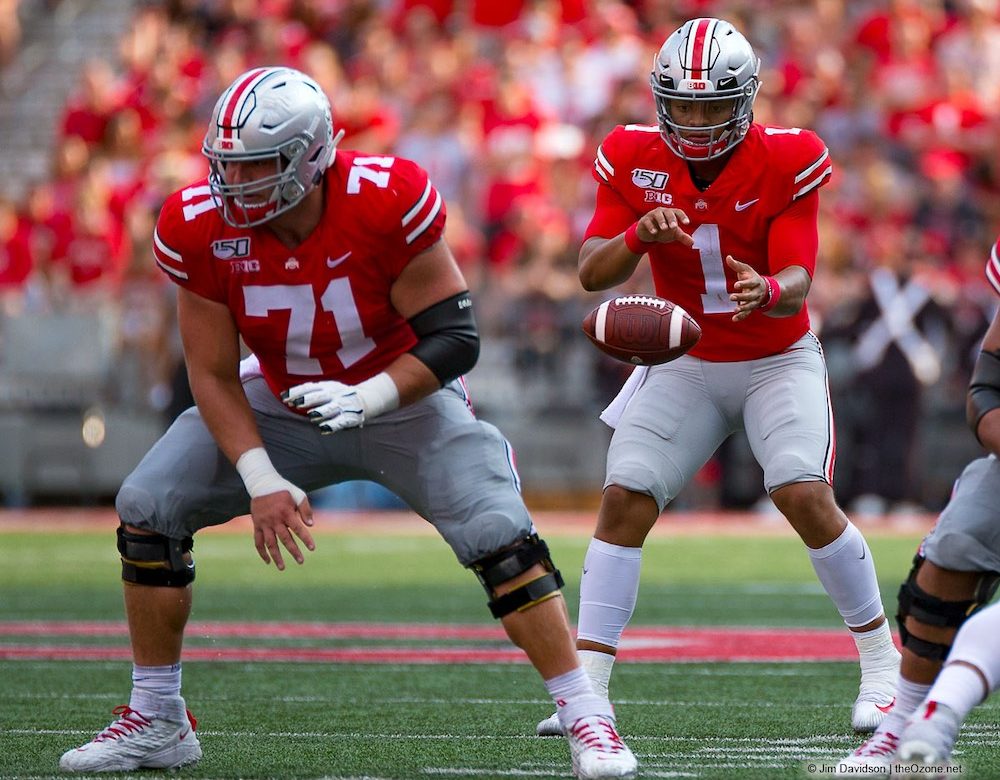 While Justin Fields has been a tremendous talent playing quarterback for Ohio State, he has greatly benefitted from the lack of pressure he has had to face from the interior of the line which Josh Meyer has provided for him since Fields first snap at Ohio State. Josh Meyers has a great build for the center position at 6'5'' and 315 lbs. with great strength and above average mobility.  He's very explosive out of his stance when run blocking and he's very quick to engage and drive his man backwards. He's tremendous on combo blocks and has more than enough agility to disengage and quickly and wreak havoc in the second level. He's good at turning his man out of the hole and creating lanes up the middle. He's very good at getting into the opponent's chest and once he clamps down, he's very difficult to break off. He has good hand fighting skills and does a good job keeping his opponent from getting into his pads. He plays with good pad level and is dominant when he establishes the better leverage off the ball. In pass protection, he possesses one of the best anchors in college football with incredible strength and flexibility in his lower base. He halts bull rushes like a brick wall against wind and rarely, if ever, finds himself giving up space. He does a good job of communicating defensive line movements and potential stunts and twists and his calls are a big reason as to why his line holds up so well against blitzes. He has battled defenses in the harsh weather that Ohio State has to face every year and in practice has played against one of the best defensive teams in the nation. He plays against tough defenses in the BIG-10 where defensive line play is the key to success and he has come out on top consistently. He has very good lateral agility that allows him to hold up in his tiny space very well. He's a great player to have on double teams with his quickness and strength as he can arrive early and hold up.

He has had the benefit of playing next to potential Top 20 pick Wyatt Davis as well as other lineman who are likely to get drafted within the following two days of the draft, so saying that he doesn't possess a reliance on their abilities to protect his own would be wrong. He has trouble with blocking speedy pass rushers in the interior especially when he gets left on an island to fend for himself. Delayed blitzes have been successful against him as he sometimes expects his fellow guys to pick them up.

​Josh Meyers has a very high ceiling due to his overall athletic ability and production but I have guys like him lose the support around them on an offensive line and completely crumble in the NFL. If he gets paired up with a good guard early in his NFL career he could develop into something tremendous, but that's a big "IF".