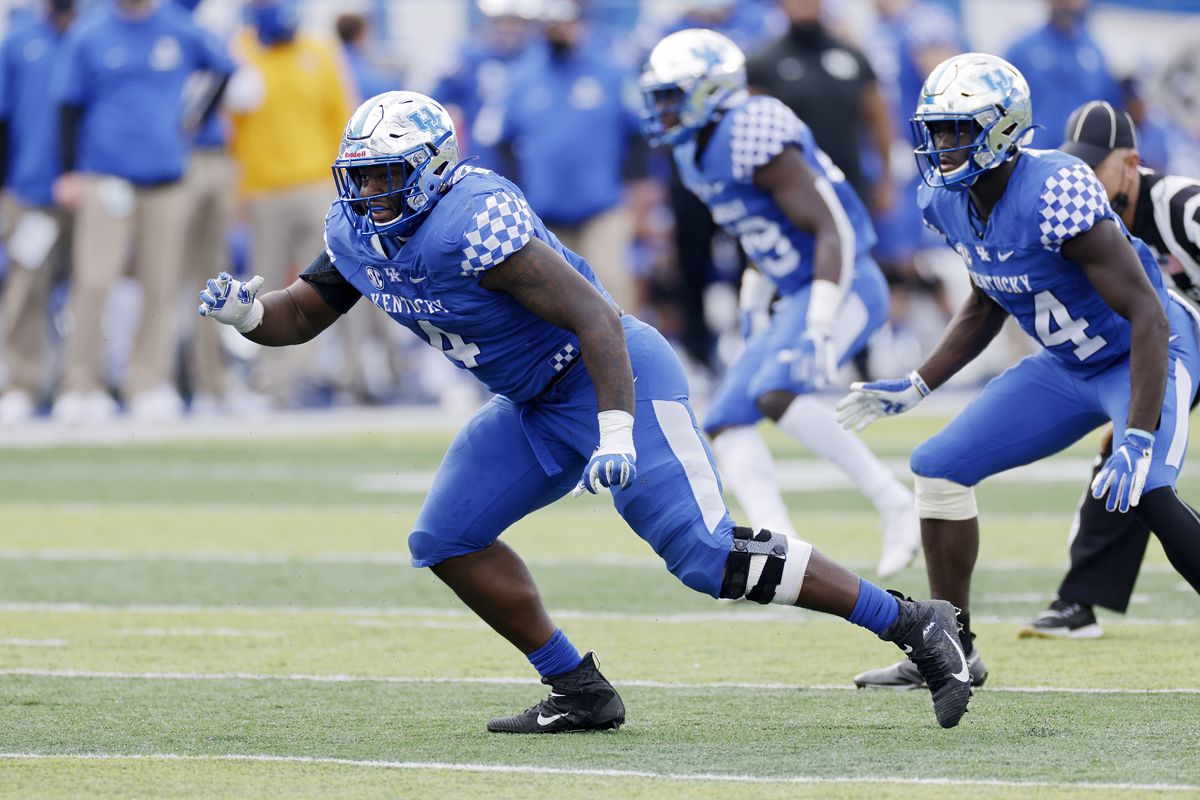 Photo by Joe Robbins-Getty Images
Kentucky has had a talent pool the few years on both sides of the football which is made even more impressive by the fact that the Wildcats are a basketball school first and foremost but Josh Paschal is another big step for the SEC school to become a respectable athletic program on two fronts. At 6'3" and 280 lbs., Paschal brings elite explosion, great power, ​and phenomenal athleticism. If put on just a few minutes of Josh Paschal tape you can see a player that at times looks unblockable with athleticism often giving him mismatches on the inside. He possesses very good length for his size and when he can extend his arms into his opponents chest he can be a difficult defensive lineman to get a hold of. His first step off the line of scrimmage is elite and when he times the snap count well he can be into an offense's backfield without being touched; he's been successful in college at blocking kicks from the middle of the line, one of the hardest places to block field goals. He comes to the line with tremendous speed to conversion and if he's single blocked by a guard he can be overwhelming to contain if they're not fast enough. As a pass rusher, Paschal comes with a plan to attack the backfield on pretty much every play with at least half them working each game. He possesses an excellent punch that's quick and powerful and when timed accurately off the snap he can thrash offensive lineman lineman at will. He has a very good swim move on the inside that is hard to block if he can swipe your hands away. He has a violent bull rush that is made highly effective with his arm length, compact powerful frame, and his exceptional quickness and explosiveness. He does attack the football when getting after the quarterback and successfully sacked and stripped Stetson Bennett IV of the football against one of the best offensive lines in college football. He has a great one-arm stab off the line that's capable of giving plenty of room in his engagement to work other moves. He's exceptional at block shedding and using his surprising upper body strength to rag doll offensive lineman. He has an excellent push-pull move when he locks onto the quarterback was highly successful using it quickly and disrupting plays in the backfield. In run defense, he can plant his feet in the ground and force rushing to go around him rather than through. He's a nightmare for offensive tackles when asked to play on the edge in run defense because his size and power in his frame not only allows him to hold up in run defense on the outside but he can collapse the edge a bit and force running backs to bounce outside or even cut back. He's very good at punching and stripping footballs, or at least being consistent at trying, and a skill that is always in high demand in the NFL. He's a highly reliable tackler that's great at grabbing and bringing down bigger ball carriers. He's very good at reading offensive lines on running plays and has excellent pursuit speed to catch up tackle ball carriers. He's a violent and nasty defensive lineman that can wear down offensive lines as the game goes and his relentless motor and ferocity basically ensures that he's going to the match at some point. He possesses very good stamina and his motor certainly can be on displays when he's charging 20+ yards down field to make tackles. Josh Paschal beat cancer in his college career and that's all I need to hear about him to know that he's tough as nails and his determination and perseverance is off the charts. He's versatile a defensive lineman as you'll find in the NFL draft with snaps at linebacker, edge rusher, defensive end in both 4-3 and 3-4 defense, a 3-tech defensive tackle, 1-tech defensive tackle, and nose guard and he'll be a popular defensive lineman in the draft when it comes to creative defensive coordinators that are looking for a player to create mismatches with. His versatility comes from entering his Kentucky career as a linebacker then outgrowing his position to become a defensive end, and then outgrowing that to become a defensive tackle/end and when you take into account his journey and constantly having to learn positions on the fly in his career you come away more impressed than you would disappointed that he didn't find a niche early in his career. He beat up on SEC offensive lineman with many of those players likely to find themselves playing on Sunday's in their careers and it shows that he's made his bones against the best college football has to offer.

The deadly "tweener" label is going to be placed upon him because he's likely to be looked at as too small for an interior lineman and too big and boxy to be an edge rusher and despite beating offensive lineman repeatedly, teams are always weary about prospects like Paschal. His compact and muscular frame doesn't offer much flexibility to bend the edge on the outside and may be relegated to a strict. His production in his college career has been spotty and inconsistent until this year and worrying about whether Paschal is a one year wonder heading into the NFL is a legit concern. When his pass rush fails, he doesn't do a good enough job of trying to bat passes at the line and becoming consistent at contributing outside of simply getting into the backfield. He has average lateral quickness and playing on the edge might be challenging for him when it comes to getting the edge and slipping by NFL offensive tackles, however he possesses more than enough lateral agility and quickness to be a menace in the interior. His timing of the snap was more notable in 2021 but it's still a work in progress as he can be late and or at times early off the ball. Not much in the counter rush game when his initial fails and I would characterize him as more a defensive lineman that thrives off of power and aggression rather than speed and finesse and incorporating more moves like a spin or stutter step, which he's capable of doing at a very high level, will make him a much more difficult player in the NFL to block. His pad level can be inconsistent at times and tends to rise up as his rush goes along. He struggles against double teams on occasion due to his lacking size and learning how to properly beat those blocks will be crucial to his career.

Josh Paschal is likely to find an entire segment on NFL network during the draft process about his battle against malignant melanoma in the middle of his career and his story is admittedly quite interesting. His violent and nasty style of player and high impressive athleticism make him one of the more exciting defensive lineman in the draft. Yes he's still developing and his size perfectly fits the tweener label but his upside as gap shooting interior lineman is ridiculously high. I think his home in the NFL will be as a 3-tech in a 4-3 scheme with his ability to shoot gaps and penetrate the backfield before his opposing lineman even knows what's happening but with a creative defensive coach that can use him almost like a queen in chest, he could be a special player. He's a boom-or-bust interior line prospect and if he's a hit on defense he has pro bowl potential.