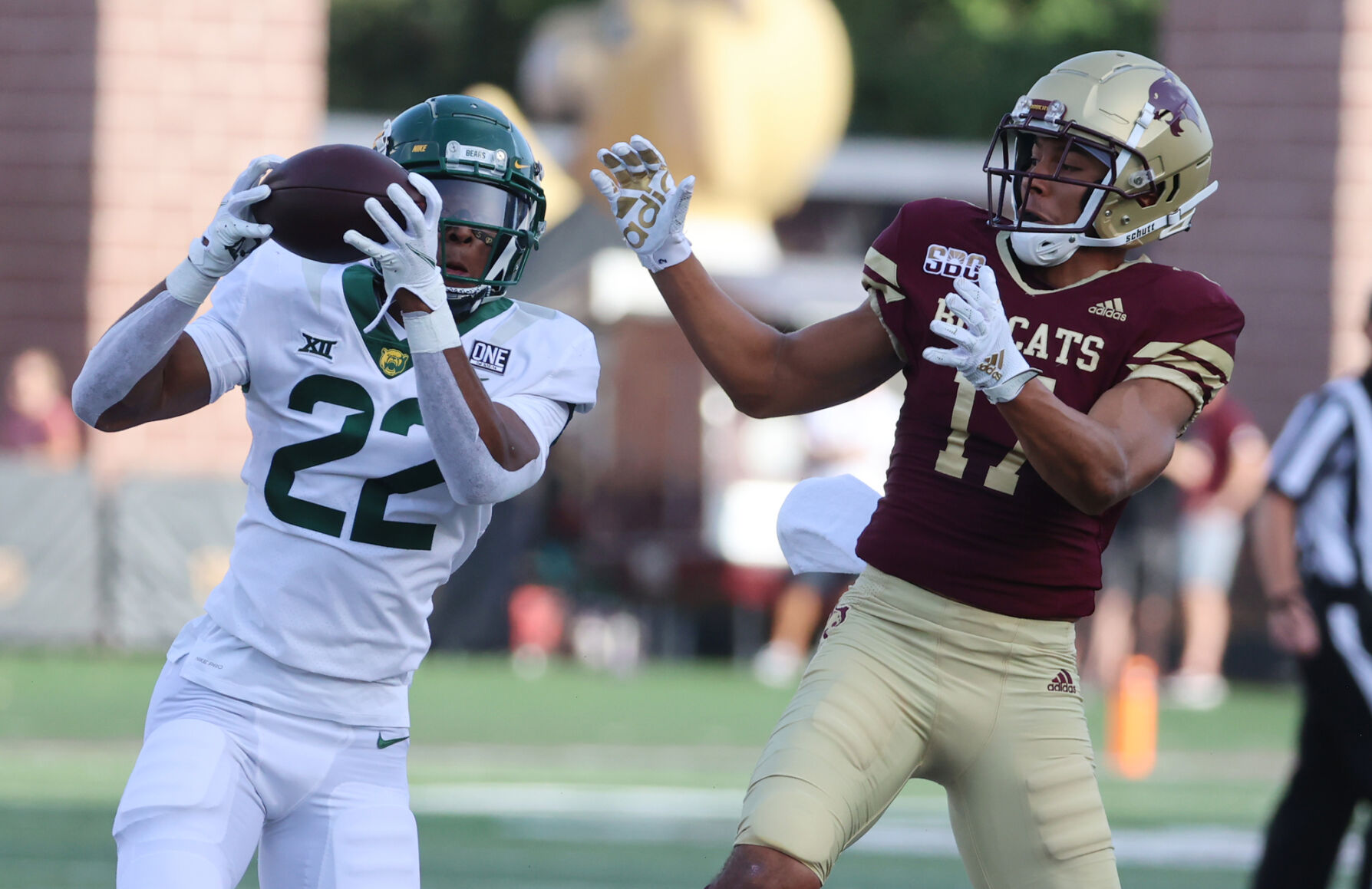 Photo by Rod Aydelotte-Tribune-Herald
The Baylor Bears 2021 season hinged a great deal on the play of their secondary and more specifically the play of their safeties in J.T. Woods and Jalen Pitre and while Pitre lived and thrived at the line of scrimmage in run defense, Woods thrived on the backend of the defense patrolling the secondary and instituting his own version of a no-fly zone. In zone coverage, he displays elite level range and explosiveness to not only pick up tremendous ground wherever the play is but also flashes the ability to be a major disruption for any pass thrown in his vicinity. He's extremely quick and fluid for a man his size in coverage and it shows up quite often with his ability to change direction without a hitch and accelerate quickly. He's had plenty of experience playing safety in different alignments and proved to be highly effective in any coverage Baylor saw fit to put him in. He was very good about recognizing route patterns in zone coverage and coming downhill quickly to disrupt the passes. His size and athleticism often forces quarterbacks to be hesitant when throwing into his area. He possesses tremendous leaping ability and can be a menace for tight ends and receivers in zone coverage when contesting catches. He does a tremendous job when attacking throws by taking excellent angles on throws to maximize his chances of making a play. He has exceptional arm length for a defensive back and often forces quarterbacks to reconsider throwing in his direction with his ability to shadow receivers and overwhelm with size. While not often used in man coverage, he has plenty of upside in this area with his excellent physical traits and teams should certainly try and coach him up to be more familiar in this area. His ball skills are what certainly has impressed me watching tape of him as he has natural hands and has a nice savviness when attacking the football. When he has the football in his hands he's proven to be an exceptionally dangerous player to room to run as the two career picks six's in his career can attest. In run defense, he plays with reckless abandonment with his willingness to deliver big hits in the run game. He's very good about hitting people below the head whether that's tackling running backs in the open field or hitting receivers in the air to either dislodge the football or intimidate offensive weapons. He's a tough safety prospect who is very willing to make a play in the teeth of the trenches. He's a high motor player who never stops playing until the whistle is blown. He's also proven himself to be a highly clutch player in his career with two interceptions in the 4th quarter of games as well as a great Senior Bowl game ending interception which had to give some NFL scouts and teams watching the game a bit of a smile.

He's strictly a safety prospect in my opinion as he rarely was used outside of the position and I would be surprised to see teams try and move him around the defense. In coverage, he can be a bit jumpy in the secondary when it comes to reading quarterbacks and route patterns. He can too often come down from his perch in the secondary when reacting to look-offs or pump fakes and has had to play catch up quite often on deep balls. He's too much of a freelancer in coverage at times and can be caught off position a bit in the secondary and learning to stay in his lane in coverage will be a tremendous asset in his career. He's much more of a big hitter tackler rather than an efficient form tackling defender and too often has found himself on the wrong side of a broken tackle. He tackles too high without the power and momentum in his frame to make up for his deficiencies in this area. He doesn't try to strip the football when he goes in for tackles and will need to try and develop this skill in his career. He's not often used at the line of scrimmage and his ability to make an impact as a blitzer in the NFL is a question mark currently. He's rarely been asked to play man coverage in his career and while he certainly has the build and athleticism to star in this coverage and teams drafting should ease him into man coverage early in his career. His production clearly had a huge bump the last two seasons which corresponds with Jalen Pitre switching for linebacker to safety at the exact same time teams need to be wary of when drafting him as it would be hard to tell me it was just a coincidence.

J.T. Woods in my opinion was underutilized at Baylor as prospects with his level of talent and physical traits should have been used more often on defense. He showed at the combine that he's a phenomenal athletic specimen and the Senior Bowl did him some favors as well and although those two events certainly shouldn't be taken over his film, his film shows a great deal of potential as a single-high safety in the NFL. If he can show in camp that he can be a versatile defensive back in training camp and is given ample reps in games to cover tight ends, he could be a steal in the draft for a safety-needy team.