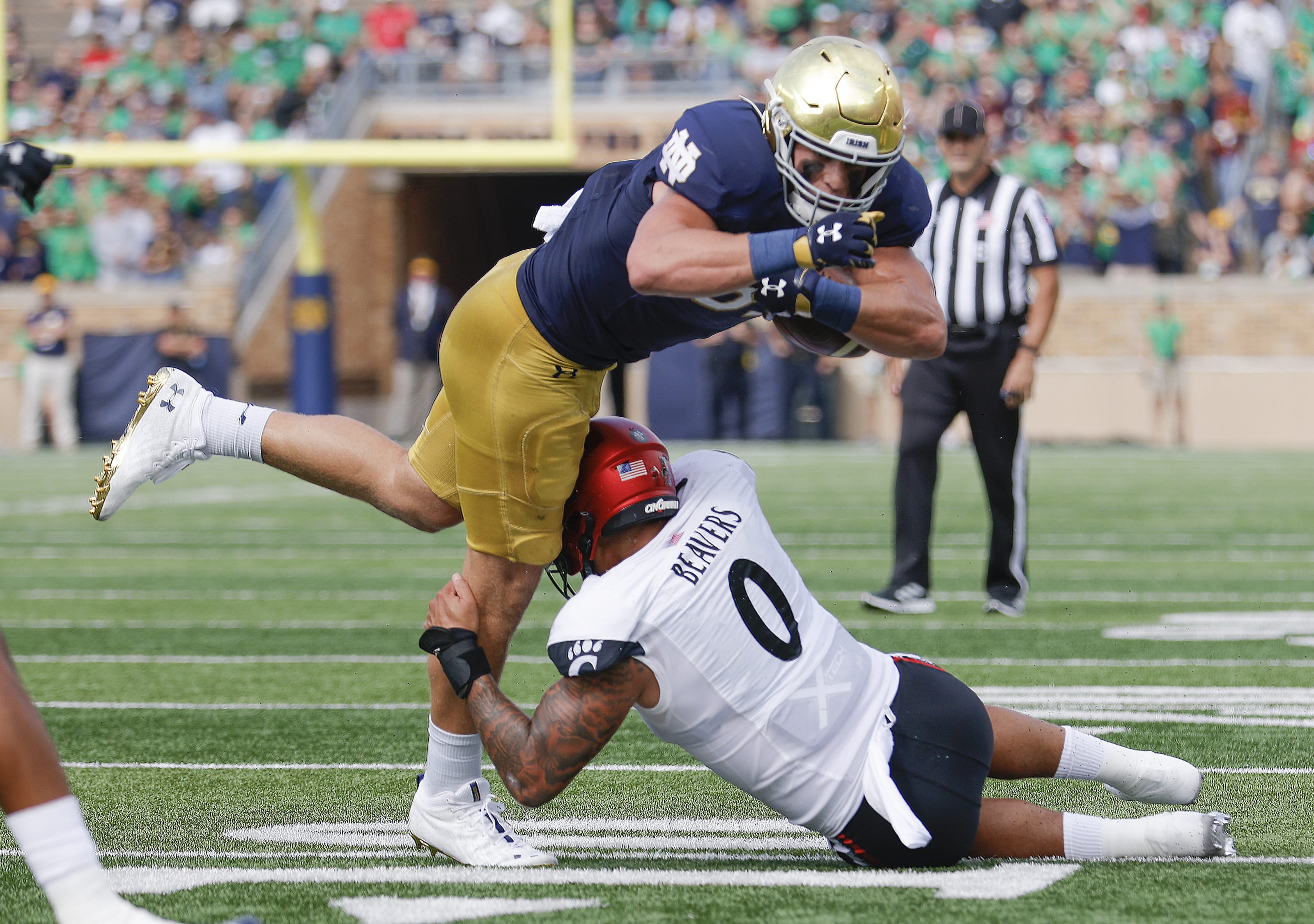 Photo by Michael Hickey-USA Today Sports
A late rising draft prospect towards the end of the year, Cincinnati Bearcats linebacker Darrian Beavers came up big quite often for his team in clutch situations and was one of the most impactful defenders for Cincinnati in big games. At 6'4"  and 260 lbs., Beavers is built like a tank at the linebacker position that boasts excellent power, nastiness, and versatility. Beavers was originally recruited as a safety and wide receiver but his continual growth forced the Bearcats to try him out at linebacker and he never looked back and his development at the position is rather remarkable. Darrian Beavers flashes exceptional power in his torso and lower half as well as surprising mobility for a linebacker his size and it's what made him such a menace for offensive lineman to deal with. In run defense, he's very powerful at the point of attack which is made even better by his defensive lineman like frame and his length and strength in his build allows him to bull rush offensive lineman and force his way into the backfield. He can hold up in run defense better than most linebackers in this draft and when he makes contact with offensive lineman it can be quite the collision. He's very good shedding blocks in run defense and never is out of a play even when engaged with lineman. He has excellent tackling form when he squares up ball carriers and he can be a brutal hitter when he gets a chance to be. He's a violent tackler that will bring down ball carriers with a purpose and his powerful arms and torso allow him to pretty much bring down any kind of ball carrier effectively. He does a great job of trying to dislodge the football either with his head or punching it free. He's a very good blitzer as a pass rusher with his size and downhill style of play and was highly successful at getting home on sacks when his teammates were struggling to do so. He can be a great asset as a blitzer when it comes to forcing the quarterback out of the pocket. He possesses good flexibility in his frame and has squeezed through gaps in the trenches in order to make plays in the backfield. In coverage, his size and length help in zone by forcing quarterbacks to work throws around him and he's capable of intercepting passes as he possesses surprisingly good hands for a linebacker. His previous years playing safety and wide receiver gives him great insight into what receivers and tight ends are trying to run which gives him excellent route recognition at the line. He's never out of position on defense due to his instincts and high football IQ and nose for the football was one of the biggest reasons for his success in 2021 in the middle of one of the best defenses in college football. His relentless work ethic, competitive fire, and love for the game of football have all been raved about and documented by coaches and his passion for the sport is going to certainly earn him fans in NFL locker rooms. In the biggest game of the year for the Bearcats at AT&T Stadium against Alabama, Beavers put up one of the best games of the year with 10 tackles with two for loss and a sack and while Alabama did ultimately rush for 200 yards on his defense, his performance in the biggest moment of his career certainly stood out among the rest.

Darrian Beavers is an average athlete in the middle. I wouldn't expect him to be used much in coverage with his somewhat lacking speed and agility. He's not overly explosive out of his stance and needs a runway to reach top speed when chasing ball carriers. He played on defense with immense talent around him in Myjai Sanders, Coby Bryant, and Ahmad Gardner which allowed him to use his downhill style of player more frequently as he didn't have to worry about dropping back and covering tight ends or slot receivers. He needs to take great angles to make tackles that involve on outside run plays against running backs as he doesn't have the elite speed to run down ball carriers. He plays in the AAC which is a weaker college football conference that doesn't produce a great deal of NFL talent and while he certainly has proven himself to be effective against Power 5 schools, a majority of his plays have come against lesser programs. He can be prone to getting broken away from when making tackles as his immense size for a linebacker often forces him to go high on players and becoming more consistent at keeping his pads low when making contact and wrapping up ball carriers will be a necessity in the NFL. Kind of played a weird role for Cincinnati at the linebacker position that often saw him line up pretty much everywhere and while that could be seen as a high level of versatility it could also mean that didn't necessarily fit any particular role on defense.

Darrian Beavers was one of the better linebackers in the country by the end of the season and NFL scouts are to be keeping a close eye on Beavers at the combine because 6'4" and 260 lbs. with his movement skills and power are hard to find. Yes his ceiling is as high as other linebackers but his skill set could make him a highly productive hybrid linebacker in the NFL. In the right system he could be a vital role player on a defense and at the very least he could be a starting inside linebacker in the NFL in his career.