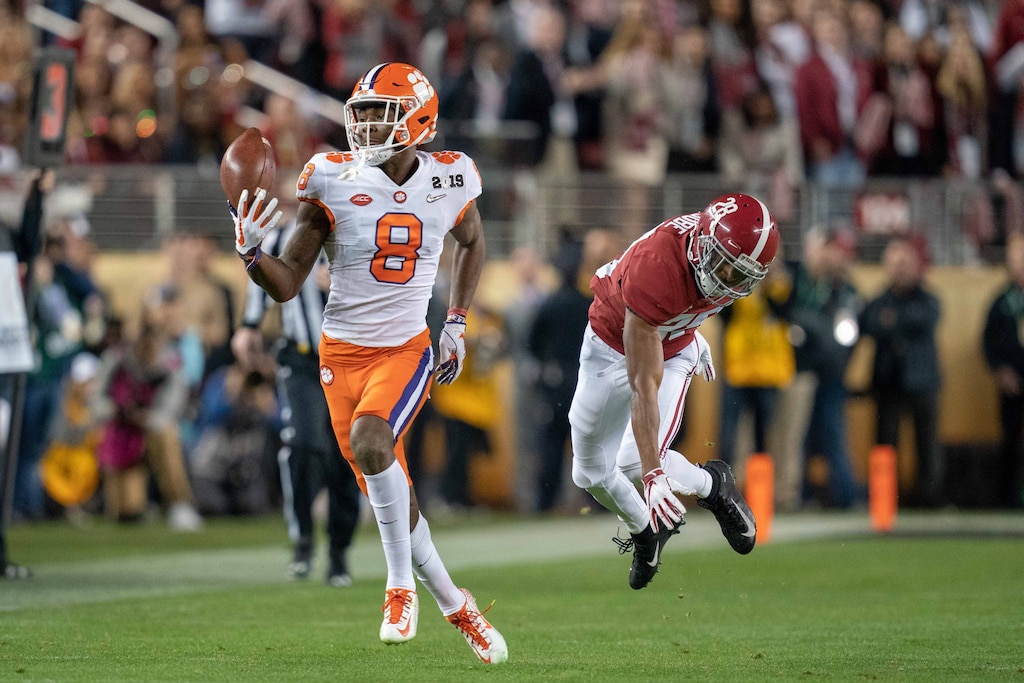 Justyn Ross would likely have been picked in the top 15 of the draft in 2021 and maybe even higher but he has had a devastating injury to his neck and spine that is going to be under a microscope by NFL teams despite his production in 2021. He comes in at 6'4" and 210 lbs. with great size, good athleticism, and excellent hands. He's a very difficult man to keep from catching the football with his large catch radius and will certainly find early success as a red zone receiver. He has excellent hands to reel in passes outside his frame and does a great job holding onto passes through contact and traffic. He's got incredible boundary awareness when making sideline catches and will immediately give teams a #1 option at the outside receiver position when making 1st down catches. He's an excellent option in the red zone with his overall ability and should translate well into the NFL. Good agility and speed and can be a dangerous player for defenses if he gets behind them. Good route running for a receiver his size with his twitchiness and agility which allows him to get great separation at the top of his routes as well as fool corners on hitch's and sluggos. He's a nightmare as a 50/50 ball receiver and will be a difficult match-up for shorter cornerbacks in the NFL. He's an excellent blocker in the running game and should entice teams with a rushing style offense. Does an excellent job of timing his cuts to get the most separation he can from cornerbacks and does a good job giving his quarterback ample room to throw the football. He will fight for yards after the catch and can be a difficult receiver to bring down solo. He was a key player during Clemson's championship team as a freshman and was the best offensive weapon on the field which shows that he has experience playing huge games and that he brings his best when called upon. His remarkable recovery from his neck injury shows a rare level of toughness and determination that NFL coaches are going to really admire and if he can conquer that in his life, football shouldn't be that much harder.

The neck injury is a huge issue considering that it's a congenital fusion on his spine and while the surgery was successful and he played in 2021, his injury will be his biggest obstacle . He has had superstar quarterback Trevor Lawrence throwing him the football for most of his career and when he had D.J. Uiagalelei as his quarterback in 2021, his production dropped considerably. He's prone to getting chased down by defenders and doesn’t possess many evasive maneuvers in his game. Not a lot of yards after catch on his stat sheet which tells me he doesn't break tackles or evade defenders very well and is going to cost him on most teams draft boards. Route tree is hard to see based on Clemson's run-based offense and will need to impress in workouts when showing off the routes he can run. He's not a burner down field and will find most success deep on jump balls against shorter corners. He can lose sight of the pass and be guilty of open field drops. He dealt with a fracture in his foot in 2021 that kept him limited and will need to be looked at by teams since he had surgery on it. Not a versatile prospect by any means and will strictly be an outside receiver in the NFL.

Justyn Ross has overcome more than most people on earth to get neck surgery and work his way back onto a football field is at the very least inspiring and I'd be shocked if there isn't a story on NFL network about his journey. He's got the size, athleticism, length, and toughness to make it in the pros and if a team can look past his injury history and see the forest through the trees they could come away with tremendous players on the outside.