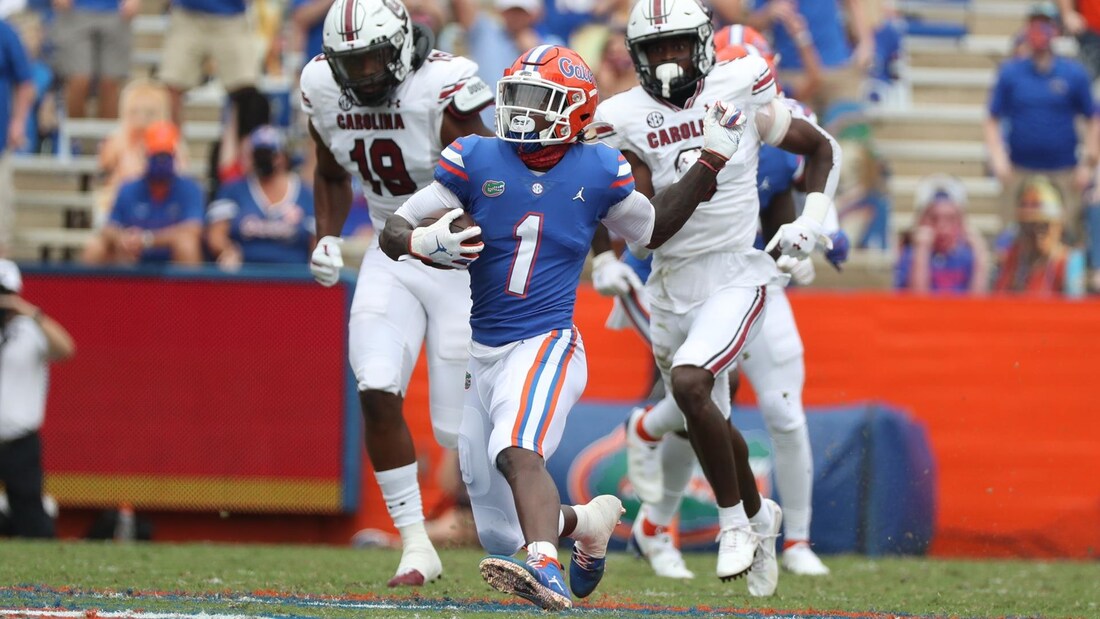 No receiver in college football was more dangerous in the open field than Kadarius Toney out of Florida. At 6' and 193 lbs., Toney brings a slender yet muscular frame with surprising power in his lower body. He's easily the most difficult receiver, if not offensive player, to tackle in college football with elite level agility and elusiveness combined with his unique ability to break tackles. He's an extremely difficult player for defenders to get a clean shot on as he's always juking and pivoting in the open field, allowing him to take advantage of poor tackling angles. He's always a dangerous player to leave alone in the open field with his ability to turn 5 yard screens into 50 yard touchdowns. He possesses very good hands and has the ability to come down with catches outside of his body. Strong and sticky hands to hold on to passes on hits and possesses excellent balance in his base to keep upright after shots. He's been aptly named "The Human Joystick" for his ability to squeeze and slip through tackles and find holes in a defense and his supernatural flexibility in his frame certainly helps him get free. He's a menace in the slot with his exceptional quickness and agility and has the tools to develop into an elite slot receiver in his NFL career. He has good deep skills when he can get behind his man and will dive for the football if he has to. Tough and competitive and will play through an injury if need be to win. He has serious potential as an elite return man in the NFL with his skill set and could be a menace on trick plays.

The word potential has to be used a lot with him as a prospect because while his skillset combined with his playmaking ability scream highlight reel player, his raw technique and lackluster production in college career however halt in hype train for him. He doesn't get enough separation in press coverage and has a hard time getting a release on his route when in man coverage. He's a much quicker player than he is fast and ultra-athletic corners can shut him down in games. Relies heavily on his ability to get separation at the end of his routes by using his quickness and doesn't do enough in his route-running to make it a consistent tool in his game. He lined up everywhere for the Gators which may have hindered his development as receiver and I don't see him finding success outside the slot in the NFL. He played with an exceptionally talented Florida offense that featured talent at quarterback in Kyle Trask as well as in the receiving corps in Kyle Pitts, making him an after thought on some plays. Needed to be scheme open by Florida a lot to make for his lackluster route-running which could be a turn off for some teams. He had the benefit of playing Robin to Florida's  Batman in Kyle Pitts considering that he faced double and triple coverage every play and still managed to take over games. He has had an injury history in his college football career and will likely find the same problems in the pros with the uptick in play.

Kadarius Toney is an exciting prospect that has many receiver needy teams certainly moving him up their draft boards but his undeveloped overall game is going to potentially hold him back. I would be shocked to see him picked on Day 1 but I don't think he'll wait very long if he lasts until Day 2. He's too good to let fall out of the 2nd round and will be a tremendous project for the right team.