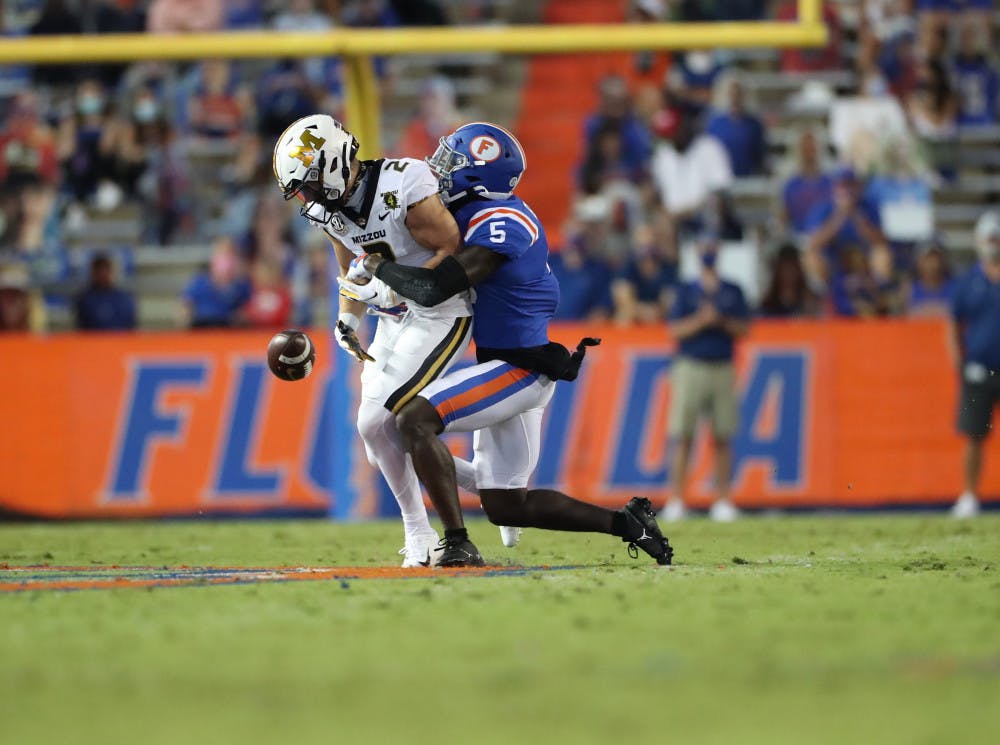 Kaiir Elam has been Florida's best defensive back over the last three seasons and is coming as one of the most athletic defensive players in the draft. At 6'2" and 200 lbs., Elam brings elite size and athleticism to the cornerback position and it certainly shows up in games. Rarely, if ever, is outmatched physically by his opponent and knows how to use his natural strength and size to succeed in coverage. He possesses freakish speed and agility for a corner and when asked to shutdown a receiver he has all the tools to do so. He’s a very aggressive cornerback who plays defense the way it should be. In press coverage, he uses his elite length to jam his receiver at the line and does a great job of disrupting a receivers route early. He gets his hands on a receiver early in the route and forces them to fight to get up field. In man coverage, he doesn’t bite hard on sluggo routes and has enough athleticism to not only make up ground in a route if he does bite but he also has more than enough speed to stay glued to speedy deep threats. He does a nice job of being patient at the line in man coverage and has nice route anticipation. He has great agility to change direction quickly and stay on receivers that rely on quickness and speed to make plays. His natural length and size help him tremendously when the ball is in the air because he closes the throwing window so much down the field. His aggression and length make him a dangerous person to test on jump balls as he will look to swipe or intercept the ball. Not many plays can out jump him on contested catches and makes coming down with the football a difficult task. He’s great at using his arm length to stick his hand into a receivers catching point on pass and knock the ball loose and has more than enough hops in his lower half to high point passes and defend them before a receiver has a chance to. He has great ball skills and good hands to come down with passes that he has a chance to grab. He’s a very good run defender at the corner position who will head on tackle running backs and receivers and isn’t afraid to make plays in the trenches. He plays in the SEC against some of the best receivers in college football, which means he plays against NFL ready talent as well as some of the best offenses in college and comes into the draft more seasoned against NFL talent than most. He has NFL bloodlines with his father,  Abram, and his brother, Matt, both playing in the NFL with the latter being a former 1st round pick by the Jets. He plays with exceptional competitive fire and toughness on the field and will earn respect early in his career.

Kaiir Elam is still a bit of a raw cornerback when it comes to technique in his back pedal and press coverage. He’s high in his back pedal in man coverage and can risk getting his feet mixed up and losing ground to speedsters. He doesn’t play low enough in press at the line to get the most out of his length and can occasionally give receivers more cushion than need be which limits his ability to press them. He can rely on his athleticism a bit too often when matching against shiftier receivers and can let his overall technique slip a bit. He can be guilty of giving too much cushion in man coverage allowing him to arrive late on shallow slants and giving up yardage. He can be overly aggressive and handsy down the field and can be guilty of getting flags occasionally. He can struggle with deep throws occasionally by not turning on the jets soon enough, causing him to give up big plays. He doesn’t have a lot of experience in zone coverage and when asked to play zone at Florida he can get a little lost in space.

Kaiir Elam is a phenomenal cornerback prospect with a sky high ceiling with his athleticism and should be high on many NFL draft big boards for teams in need of an aggressive press-man corner. His athletic traits will allow him to match up against 99% of the NFL receivers and have a chance to succeed against them but technique will make or break a player in the pros. Once he polishes his play and refines his technique, he could be a game changer at cornerback.