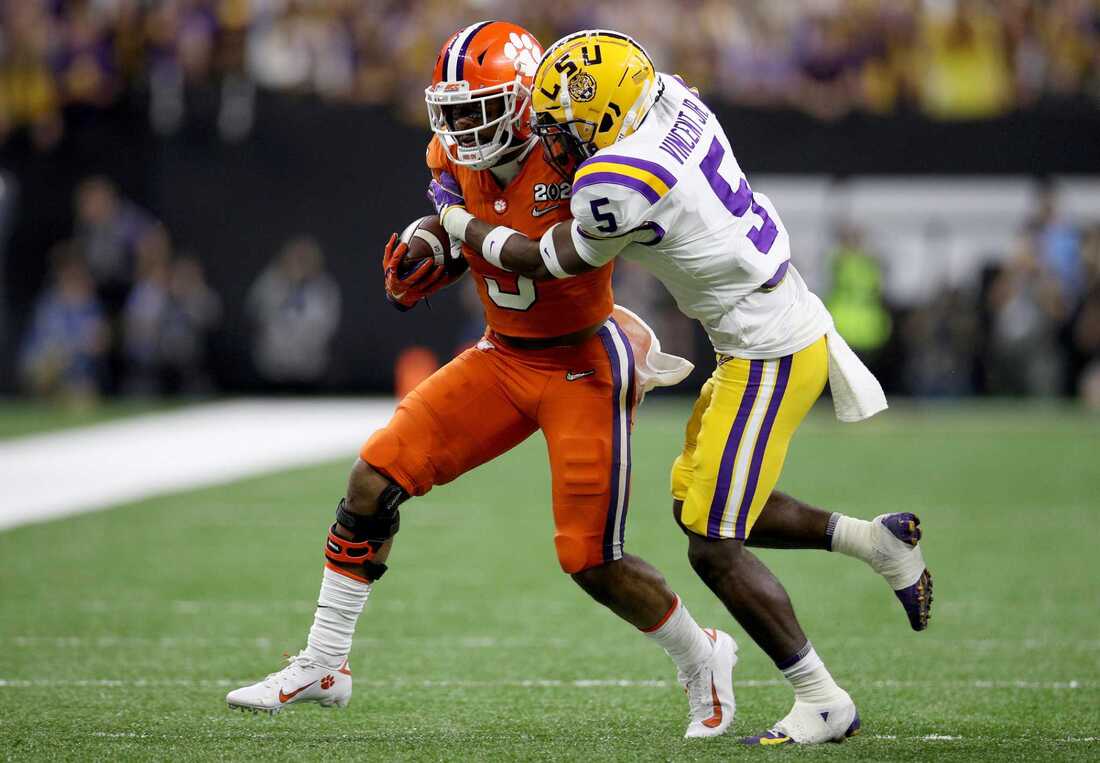 Kary Vincent Jr. was the forgotten man in a extraordinarily talented LSU secondary that produces top level cornerbacks each and pretty much every year and Kary Vincent Jr. could be the next player to come down the pip. He's a 5'10 and 185 lbs. cornerback that plays with consistency and elite athletic ability. He's going to likely be one of the fastest players in this draft based on the amount speedy receivers that couldn't pull away from him on deep routes. He's an elite level athlete with his agility and quickness and it's very rare that he finds his ankles broken in coverage. He's got an extra gear in man coverage where he can sort of trail and then when the ball is thrown he explodes past the receiver like a race horse to attack the ball at it's catching point. Elite level quickness goes well with his speed and can change direction on a dime. He's an excellent zone coverage cornerback with his elite level athletic ability and rarely gets fooled by fakes and play action. Man coverage skills are very good on deep routes and rarely, if ever, gets burned bad enough that he can't make and close the gap with his speed. He can lay the wood on a receiver if he sees an opportunity and more than enough speed to quickly run down ball carriers in front of him. Very good vertical game and has been effective at intercepting footballs at the high point. Excellent hands for a cornerback that will catch most balls in his direction and he's an impressive blitzer off the edge when disguised properly. He has played safety, slot cornerback, and outside cornerback when he's tasked to do so which gives him versatility as a player and allows him to line up in many different looks. His range as a safety is elite with speed and explosiveness and may even consider moving to that position in the NFL. He's not good at run defense for a cornerback and it's unlikely that he'll ever be given his size. He's good enough tackler for college but he's going to suffer a great deal in the NFL unless he works on his technique. He's non existent when asked to press cover a receiver and is likely never going to excel at it. He can get lackadaisical with his fundamentals in coverage, especially man coverage, and it can leave holes open for receivers to catch the football. Too often relies on his athletic ability to make plays and will need really show out in 2020 as he's going to be given the starting outside cornerback spot on their defense. He's apart of easily one of best defenses in college football that has talent all over the team especially in the secondary with Vincent Jr. playing alongside Derek Stingley Jr., a potential #1 overall pick in 2022, and JaCoby Stephens, a beast of a safety that has really shown up in coverage for LSU. Kary Vincent Jr. is going to be tasked with manning the other side of the LSU secondary and it will likely be the most challenging position he has been in since arriving LSU. He's going to get challenegd constantly with college quarterbacks absolutely terrified about throwing the football in Stingley Jr.'s direction and how well he performs under the duress is going to determine when he's drafted. He could find his stock soaring if he perofrms well in the roll and teams will be clambering to get him on their squad, or he'll be a potential Day 2 pick, more likely Day 3, and have to fight for a roster spot.