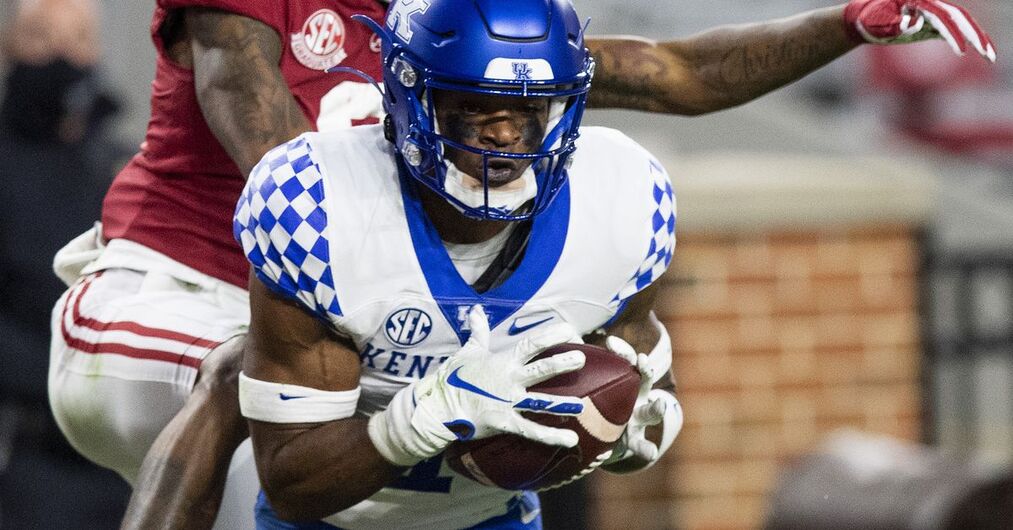 The SEC’s leader in interceptions, Kelvin Joseph turned his college career around in 2020 after getting suspended and eventually transferring from LSU to Kentucky. He brings good cornerback size at 5’11” and 197 lbs. with rare arm length for his size and elite level athleticism. He’s a highly aggressive and highly competitive cornerback on the outside that has the speed and strength in his build to match up with anyone. He plays big when the lights are brightest and in his contest with Alabama against their vaunted receiving corps he came away with an interception and shut down his man throughout the game. He has great ball skills and is always a threat to come down with the ball when he gets a hand on it. He’s good at getting into passing lanes and disrupting catches and any receiver he faces is in for a long day on contested catches. He attacks the football in the air with explosion and grit and can hang with the best of them when it comes to air time. In press coverage, he’s aggressive at the line and does a nice job of riding his man out of bounds on deep routes. He’s not outmatched by athleticism often even while playing in the SEC and doesn’t find himself getting burned downfield often. He’s an aggressive tackler and does a nice job of attacking head on when bringing down ball carriers. It benefitted him a bit to transfer out of the crowded and competitive LSU tigers secondary and allow him to thrive as Kentucky’s #1 defensive back.

His time away from the field during his suspension and transfer has shown up in his technique. He has trouble with his back pedal and can often find himself turning and running late on deep routes. He's high on his feet and can struggle with changing direction in man coverage. He's raw in zone coverage and will need a long leash to make mistakes in order to develop further. He was suspended for violation of team rules at LSU which is never a good sign for a player and teams will to do their due diligence. He bites too often on fakes and sluggo routes and he'll have to learn how to hold his ground to prevent him from getting beat deep. Late to react on run players and too often allows short passes in front him to gain yards after the catch. Some coaches might downgrade him for transferring out instead of competing for a starting position, I am not however, and it could cost him on draft day.

He's had a different path to the NFL draft than most college players and I was a little surprised when he declared for the draft early. He showed at Kentucky that he has the potential to be a dangerous cornerback in the NFL with his length, athleticism, and aggressive style of play at cornerback. If put in the right system and given time to develop, he could be a steal in the draft. It's going to take the right culture around him to thrive which could be a blessing in disguise for him.