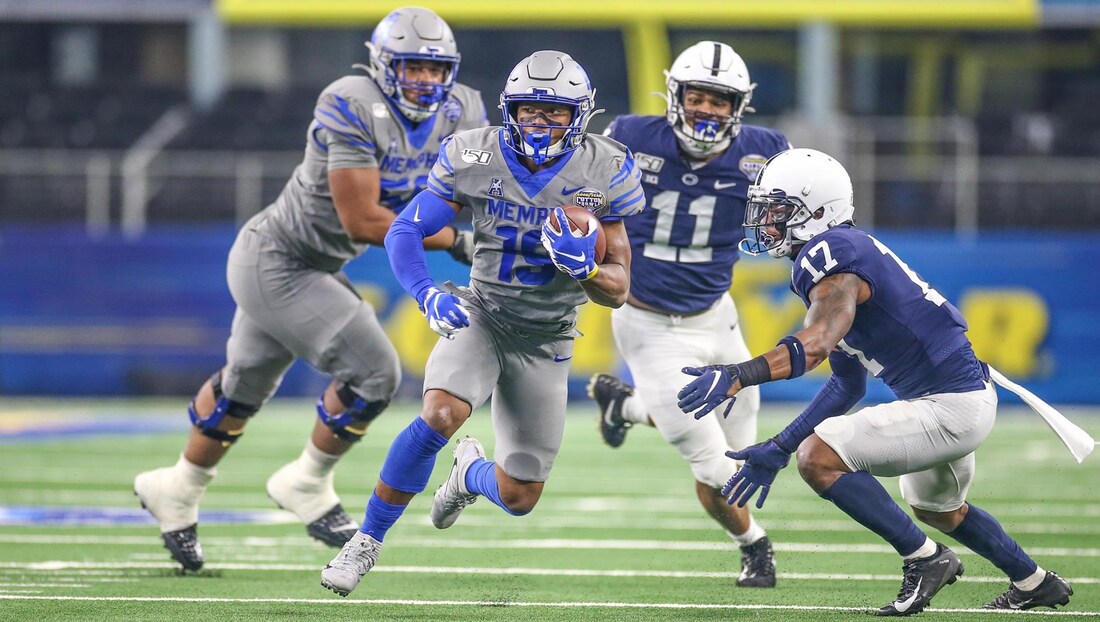 Memphis has seen quite a few running backs enter the NFL over the years and Kenneth Gainwell looks to be the next running back to come off the conveyor belt. He's an electric running back at 5'11" and 195 lbs. and is easily one of the most explosive Memphis running backs to come out in a while. He can go from 0-60 quicker than any back in this class and his top speed is blazing. If a defense gives him an inch he'll take a mile and it's awesome to watch. He's exceptionally quick in his feet and can make defenders miss in a flash. He utilizes a great juke move that can be a nightmare for players in one-on-one scenarios. He has a tremendous spin move that he uses to both shed tackles, change direction after the catch, or avoid contact all together and it's going to be a skill for sure translates into the NFL. He bolts through holes that his offensive line opens up and does a tremendous job of following his blocks. He possesses very good ball carrier vision and has been a terror out of shot hand-offs that allow him to pick and choose his spots. He can turn on the burners and scorch defenders when he has clear skies ahead of him. He's consistent as a clock tower and brings the same production and effort to every game. He's probably the best pass catching back in this draft with easily the best hands among the running backs, by far the best route-running so much so that he can play the slot at times, and is one of the most dangerous players to have on a screen play with his elusiveness and explosiveness after the catch.

He's not going to lower his pads and get extra yards and at times tries to avoid contact all together. Most of his runs come from shotgun or read-option which can hide his flaws when running up the gut of the offensive line. His size limits his ability to play all 3-downs and I would expect his career to last very long if a team lines him up in ISO and has him run into the teeth of a defensive line. He has only played one year of college football as well as only a year of playing the running back position considering he played quarterback in high school.

​Memphis running backs have been very popular as of late with Tony Pollard and Darrell Henderson just to name a few and Kenneth Gainwell could be the best of the bunch. He caught a lot of college football defenses off guard and he could have the same effect in the NFL. I can see clever offensive teams drafting and using all over the field because he's talented and smart enough to be more than just a running back. He's going to hear his name called in April of 2021 at least early in Day 3 but I doubt he has to wait that long because players like him are quick to succeed in the pros.