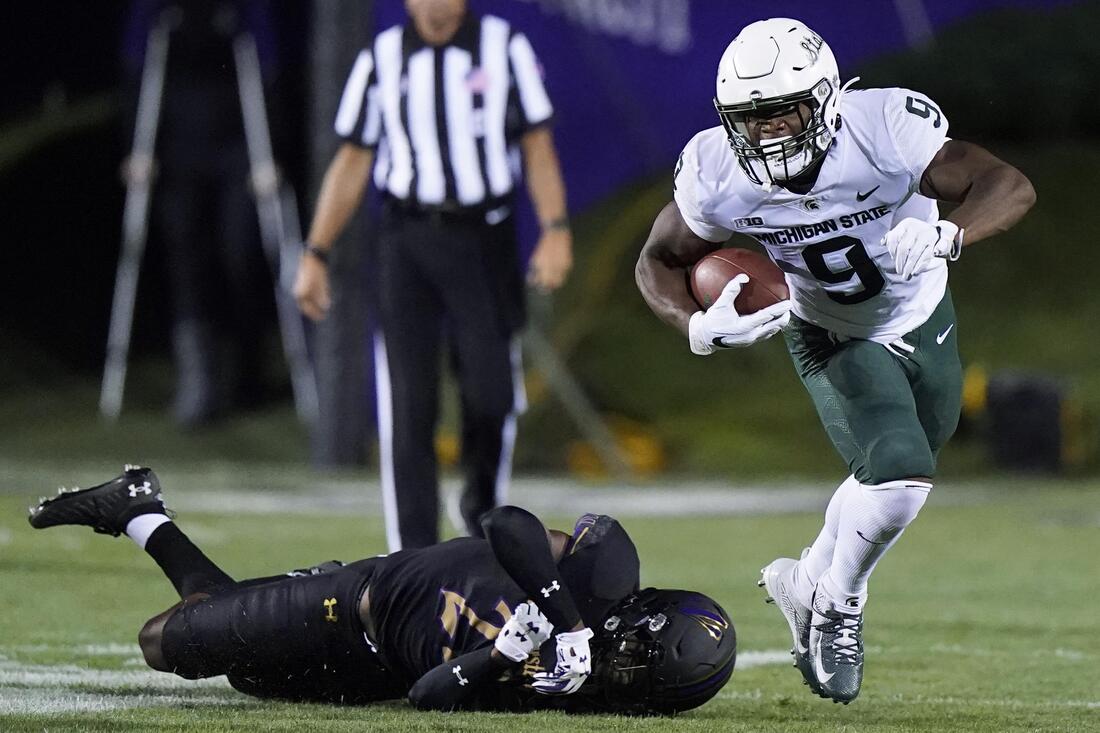 Photo by Nam Y. Huh-Associated Press
Although there may be some debate as to who is 2nd place in the 2022 NFL Draft running back class the clear cut #1 guy at the top of every teams board is Kenneth Walker III who put the Michigan State Spartans on his back and ran himself into the Heisman conversation. At 5'10" and 210 lbs., Walker III brings a brick house build with exceptional athleticism, power, and elite ball carrier vision. A transfer from Wake Forest, Walker III proved to them and the rest of college football that he was more than just some red zone threat for an offense by putting together an excellent Michigan State season in his only year at the school. Walker III has had to work his way through camp and practice to get a shot at starting position at a Power 5 school after his only offers in college football come from Wake Forest, Kent State, and Arkansas State. When running with the football, Walker III displays elite ball carrier vision to see holes beginning to open up in the trenches as well as double back when they close and find another which allows him to reduce his negative plays and create big yardage gains for his team. He possesses elite quickness and agility at the running back position which goes hand in hand with his ball carrier vision creating a skill set that's immediately going to translate and thrive in the NFL. He's the most elusive running back in this draft class which is made even more remarkable given his size and previous usage and it's a key reason as to why he was a human highlight reel in 2021. He can stop on a dime at top speed and watch defenders fly in front of him then change back into sixth gear quickly and pick up more yards. He has a videogame spin move that can be used as both an initial move to avoid contact as well as allow him to cut back and run the other way. His juke move has left many defenders of all shapes and sizes with broken ankles as well as being on the wrong end of sports center highlights and he uses these moves with such grace and efficiency that defenses had to practice boxing him into the sideline. He's as tough as he is quick and Kenneth Walker III made it his mission to never be tackled by the first defender or one defender and on many occasions could be seen dragging defenders for extra yards. Kenneth Walker III is a running back you can count on not to fumble the football after having the longest streak in college football with fumbling. He possesses outstanding power in his 210 lbs. frame and isn't afraid of dipping his shoulder and trucking linebackers and safeties blocking his view of the line to gain. He possesses a great deal of power in his legs and has broken many tackles in his college career. Kenneth Walker is the best short yardage running back in this draft not just because of his power but because he can make people miss in the phone booth, find and squeeze through cracks in the line, and get home quickly which he did in the redzone 32 times the last two seasons. He has very good hands at the running back position and has the potential to be a highly reliable safety valve or even a receiving back with his elite quickness. He had a propensity in 2021 of beating great defenses such as Michigan and Purdue and not only does it show just how dangerous he can be if a team disregards his ability like the latter but it also shows just how good he is as a player when the lights are brightest. Kenneth Walker III's journey in college football is an interesting one to say the least but what it does show is incredible toughness, determination, and a capitalization of opportunities like the one Michigan State gave him and NFL teams do want players that can see the opportunities in front of them and capitalize. It's also worth noting that due to Walker III's lack of touches previously in his college career, NFL teams will be getting a running back with relatively fresh legs in the NFL rather than one who has some mileage to his body.

His pass protection skills are lacking for running back prospects and he did appear at times to be disinterested in the role on offense. He doesn't possess that game breaking speed NFL teams desperately look for in running backs unless he's got 10-15 yards of room between the defenders behind him, he's likely to get caught from behind. Not many yards as a receiver and while he does possess very good hands, his ability to get open, run routes, or find holes in zone coverage is questionable at this point in his career.