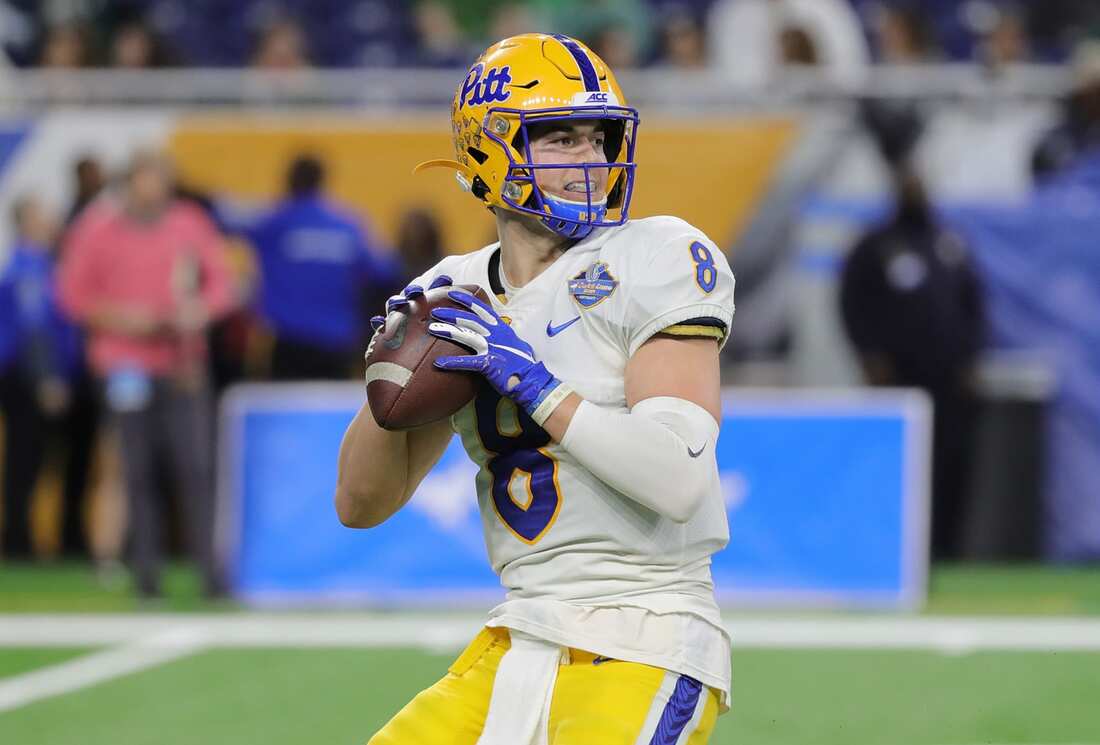 Photo by Leon Halip-Getty Images
Every NFL scout that watched last season in college football came away with the same conclusion to the 2022 quarterback class which was that it's still a toss as to who's the best quarterback in this draft this could be the most important NFL draft process for quarterbacks in recent memory but if I had to put my money on it when it came to the first quarterback off the board, Kenny Pickett would be my guy because he's the closest quarterback in this draft to the desired traits, skills, and intangibles that NFL teams are looking for in an NFL prospect. At 6'3" and 225 lbs., Pickett brings great athleticism, good mechanics, great accuracy, and the excellent decision needed to have a chance in the NFL. Kenny Pickett for a quarterback is a great athlete with lots of mobility and speed under his feet so much so that defenses had to incorporate a linebacker spy on his just so he didn't scramble to kill them with his legs. He's very capable of jetting out of the pocket to nab first downs or get into the end zone and is a difficult quarterback to chase down the field if you are a linebacker. He possesses a relatively thick and muscular frame at the quarterback position and while injuries can happen at any time no matter your size, he possesses more than enough bulk in his build to handle the rigors of the position. He's also got some nice evasive maneuvers for a quarterback, outside of a fake-slide move that we'll talk about later, and while I don't think he's Lamar Jackson nor should he have designed runs, he can be dangerous past the line of scrimmage in the NFL. As a pocket passer, Kenny Pickett's best attribute by far is his ability to quickly go through his progressions and make decisive calls when throwing the football. He's very good at staying highly poised in the pocket even when the pressure from the opposing pass rush becomes hot on his tail and I do appreciate that he leaves the pocket when he's getting chased rather than scrambling to play hero ball. He has good pocket presence, even on heavy rushes, and manipulating the pocket and getting free from pressure is a specialty of his. As a thrower his mechanics are crisp and clearly polished given his time spent at the position and all his polishing and sculpting of his throwing motion came to fruition in 2021 with a 42/7 touchdown to interception ratio. He's a highly accurate quarterback in this draft that has proven to be able to thread the needle at all three levels of the field. He provides incredible touch on his throws downfield that are precisely placed for the receiver to not deviate from his route to catch it and every ball that is thrown downfield is highly catchable. He throws the football to where his receivers are going to be rather than at them and he carefully places balls in a catchable spot for his receivers. He's enough arm strength to make throws anywhere he can on the field and rarely, if ever, has found himself unable to hit receivers deep. He's a leader of men on the football field and when a big play needs to happen for his team like a run or pass for a first down or a game-saving throw or run to get his team into scoring position, you count on him to give his all. He's a clutch quarterback who understands how to coordinate an offense and get his team ready in do-or-die situations. He's a ridiculous competitor who puts in the hard work and hours to get better as a player as evidenced by his gradual ascent to his current status in the NFL draft.

Kenny Pickett isn't going to wow anybody in the NFL with his arm strength and isn't going to have these laser beam throws that NFL teams love in quarterbacks. Most if big throws come at an arch and they're heavily reliant on his receivers ability track and come underneath the pass rather than him being able to laser it into them. Most production comes from his ability to improvise and scramble out of the pocket and while he certainly can run like the wind and burn defenses for huge chunks of yardage, making throws within the pocket and not risking your body to pick yards is what teams want from him. His throws can turn a wobbly downfield and getting a more precise and tight spiral on the football would greatly improve his touch and accuracy. His 2021 college football is a complete and utter turnaround from his previous seasons that saw him sling the football around with absolute confidence and certainty and while I don't think he's a one year wonder at the quarterback position many scouts might disagree. He's a little too willing to pick up tough yards at the quarterback position and has taken some shots his career and learning when to slide or run out bounds will be crucial to his longevity. His passes can sail on him occasionally and he can overthrow his man downfield however in 2021 these instances were rather rare. He performed one of the cooler things I have ever seen a quarterback which was a perfectly executed fake slide in a championship game running all the way for touchdown because of it and NFL players likely saw that and if he tries to slide in the NFL, or worse fake slide, NFL defenders are going level him when they get the chance. His heroics in the college haven't come without their detractors because Pickett does have that Brett Favre gene in him that tells him he can make any throw possible no matter how stupid and while he doesn't make these throws often, I have seen enough of them to notice his rare bad habit. He's going to be a 24 year old rookie when he hits the NFL and while I don't think age is a huge concern for him, as a matter of fact I am of the opinion that being of more advanced age as a prospect is actually a good thing not bad thing, teams could look at him and wonder if he his peak in the NFL could come later than others.