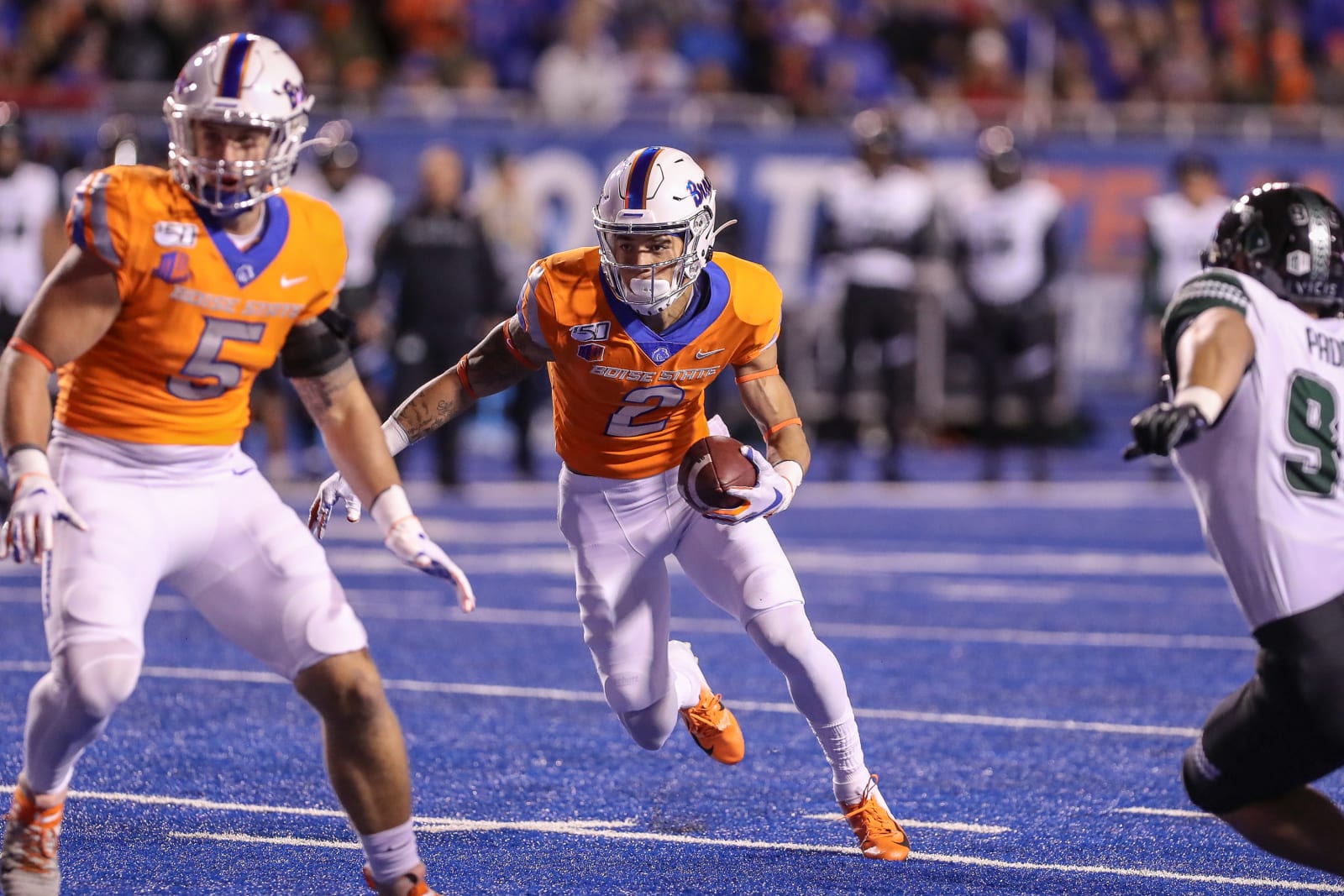 Photo by Loren Orr-Getty Images
The Boise State Broncos have always been a college team that focuses on sending draft prospects to the NFL rather than competing at a national level and have had many of their former alumni have successful careers in the NFL and Khalil Shakir looks to be the next player to come down the pipe. At 6'0 and 190 lbs., Shakir brings good athleticism, excellent route-running, and great versatility. Khalil Shakir has been an absolute weapon for the Boise State Broncos and has been a fixture in their game plans for the last two seasons. Shakir when he has the ball in his hands can be a total ankle-breaker in the open field with his exceptional use of evasive maneuvers and occasional tough running that can break bad tackles.  He has excellent hands that can hold onto passes through contact and secure it to the ground and he's not afraid of reaching out and exposing his frame to reel in catches either. He's a YAC magician on the field and his ability to pick up extra yards has given his team excellent field position on short passes as well as pick lines to gain that were difficult for his team. He's an excellent route-runner with a good sized route tree and made fools of cornerbacks that couldn't handle his quickness when separating in coverage. He was very effective at getting open when his quarterback was in duress and should be a viable option as a safety valve player. His agility and exceptional change of direction made him a nightmare matchup in the slot against linebackers and slot corners with his ability to stutter and burst to get incredible separation and when all else failed for the Boise State offense, Shakir was often open for business in the passing game and was easily the #1 target for his quarterback. He recognizes holes in zone coverage and does a great job of getting into the zone quickly and creating great separation and opportunities for dump offs. He's a very versatile receiver with snaps in the backfield, in the slot, on the outside, and was a fixture in trick plays and reverses and when he gets to the NFL he'll be a seasoned rookie that has seen everything which gives him a very high football IQ. He was one of the better return men in college and I could see him being a great special teams player early in his career.

He is slight in his frame which has made it difficult for him to release from press and man coverage at times. Not very good at fighting through contact at the beginning of his route against corners and needs to develop more grit and toughness in this regard. His catch radius is rather small, even for his size, and will need accurate throws to come down with catches rather than attacking the football in the air. Quicker than he is fast and needs a bit of a runway to reach top speed. His route-running, while very good, does need improvement because it sometimes looks like he's going through the motions on offense. He can be looking to make a play before he has the ball secured and this can lead to drops due to occasional lack of concentration. He can try to be Barry Sanders in the middle of the field and make everybody miss which can often lead him into trouble when it comes doubling back which costs his team yards. His willingness to take on contact could be an issue in the NFL given his light frame and the bruising play of NFL linebackers and safeties and limiting the punishment he takes will be a necessity for a lengthy career in the NFL. He's a decent blocker but there's room for improvement here as well, especially when it comes to making contact with defenders and driving them out of the play. The Mountain West conference, outside of Boise State, isn't known to send high quality draft picks to the NFL and a lot of the defenders Shakir made silly will be fighting for practice squad positions before they ever, if ever, see an NFL field.

Khalil Shakir, with the right offensive coordinator and quarterback, could be one of the better slot in the NFL early in his career because if there's one thing that does translate in the NFL it's that quicker players win against slower players and Shakir has enough agility and quickness to immediately make an impact in his rookie year. I don't think his future in the NFL will be outside given his lack of long speed and struggles against press and man coverage and his ceiling in the NFL will be a quality slot corner and gadget guy. He's got enough athleticism to make a difference for an offense and enough playmaking ability to be a factor in the NFL but he'll need the right situation to get him realize and maximize his potential.