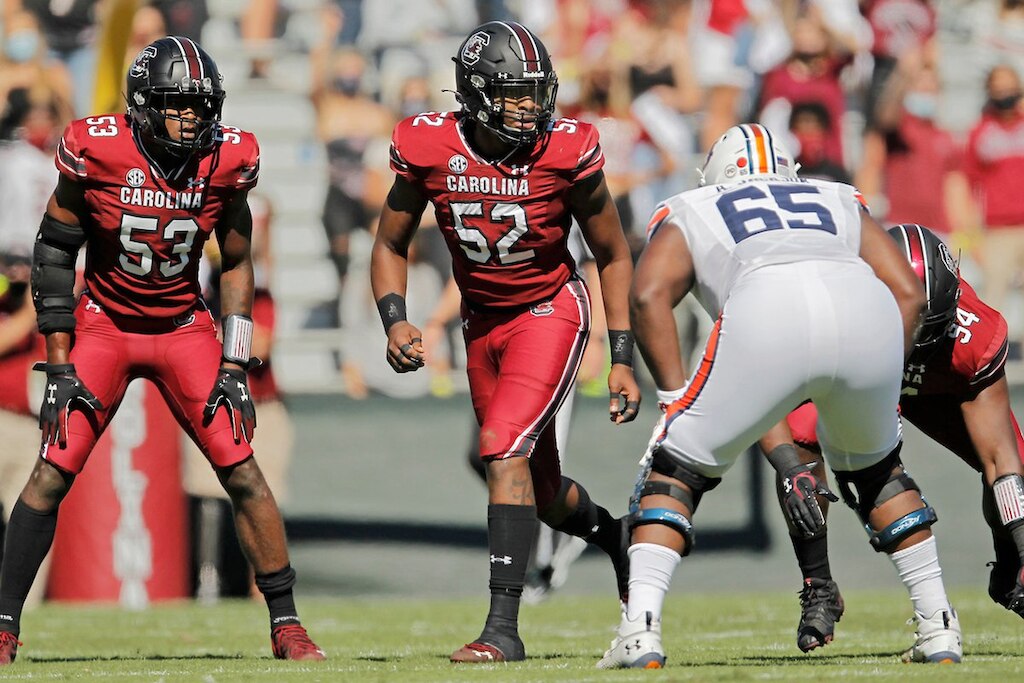 Photo by Travis Bell-Sideline Carolina
Kingsley Enagbare has quietly been one of the best edge rushers in college football and NFL scouts are taking notice. He’s a thick and powerful 6’4” and 270 lbs. with great length and athleticism. He’s probably going to wow scouts in the bench press at the combine because he has freakish power in his frame. He has one of the best bull rushes you’ll see in college football from the edge rusher position as he uproots and plants offensive tackles on a consistent basis. He has a phenomenal punch that makes it easy to drive back blockers when he’s on target. He has surprising flexibility given his frame and size and has the ability to bend the edge a little bit, although he mostly just gets the edge then collapses the pocket from the outside. His speed-to-power conversion is extraordinary and if he wins the leverage battle early he can wreak havoc in the back field. He has very good pursuit speed and can run ball carriers down if he can get a good angle on them. He has very strong hands to stack and shed blockers and can one-arm tackle ball carriers with ease if he can latch on. He has a good stutter-step swim move that has shown to be very effective when used on the inside gap. He can be deadly on stunts and twists as he brings a lot of momentum with him when making contact with interior lineman and has the ability to collapse the pocket from the inside if he gets enough leverage to drive them back into the pocket. He has great contact balance when offensive tackles try to knock him off kilter from the side and does a nice job of keeping his feet when chopped at the line. He’s a menacing tackler who can bring the pain when making contact with quarterbacks and running backs alike. He has excellent explosiveness in his lower half that allows him to quickly change direction and make plays on the opposite end of the line. He does a great job of going for strip tackles and does a nice job of cleaning up tackles for his defense if a ball carrier is refusing to go down. He can play in a two point or three point stance, although most of his snaps come from a two point, which gives him the ability to play in a multitude of schemes. When he doesn’t win at the line he does a nice job of trying to bat down passes and contribute anyway he can. He’s at his best in run defense where his size, strength, and nasty demeanor make him a difficult man to move off the ball. He holds his edge with ease once he plants his feet and often forces running backs to cut inside and avoid him tackling them for a loss. He has good enough agility for his size to dance with running backs in the open field and make solo tackles without getting his ankles broken which shows phenomenal tackling ability. He can collapse the line when tasked with making plays inside. He does a great job of stacking his lineman and glimpsing inside at the play. Allowing him to be aware of the ball movement on offense. He does a great job of fighting through double teams and has enough power in his frame to hold his ground enough to force running backs to bounce out of the hole. He’s quick to run through tight ends that try to cut him off and will plow his way through lineman once he sees the running back. On read-options you can see his high football IQ on display as he doesn’t bite on quarterbacks bouncing out, forcing the option to break inside. He plays angry with a very hot motor and you can see him wear down offensive lineman with unrelenting power throughout the game. He has plenty of reps that see him play in pass coverage and although I wouldn’t recommend NFL teams make that a regular task for him as an edge rusher, it does show great versatility as a prospect. He plays in the SEC which has phenomenal offensive line talent in the 2022 NFL draft and comes as a very seasoned senior prospect with plenty of snaps under his belt. He's a tough and rugged player whose not afraid to dive into the teeth a run play and has shown the ability to play through pain. He’s a fiery competitor and the leader of the Game Cock defense and will be a great player to have in the locker room.

One of his biggest flaws as a prospect which can cost him reps is his burst off the line and his timing of the snap. He appears to have great explosiveness in his lower half but he always seems to be hesitant to use it going up field which allows offensive tackles to get the edge on him and neutralize him. He has issues with timing the snap as well as and it’s hard to tell if he’s just slow off the ball or if coaches want him to read the play and react accordingly. He doesn’t have many pass rush moves outside of his swim move and stutter-step swipe and developing his pass rush technique could make him a monster off the edge. He plays too tall at the line in his two-point stance and often gives up his chest early, giving offensive tackles a bigger target to latch on and end him for that play. He doesn’t have a counter rush move in his arsenal and will need to develop his block shedding ability more if he wants to survive in the NFL. He had hip surgery in 2019, which he appears to have healed from, and missed the last two games of the 2020 season due to injury as well and while it’s not a huge deal as far as injuries go, they need to be noted and examined by NFL teams to make sure he’s healed and good to go.

Kingsley Enagbare is one of the more complete edge rusher prospects in the 2022 NFL draft and he has been one of the sneaky good defenders in the SEC for some time. I think his defensive coaches did him a disservice by not giving him more reps in the defensive interior or playing with his hand in the dirt because he’s built like a defensive lineman at his weight and size. If he can clean up his get-off at the line and polish his pass rush, he could be a very reliable edge rusher for team early in his career.