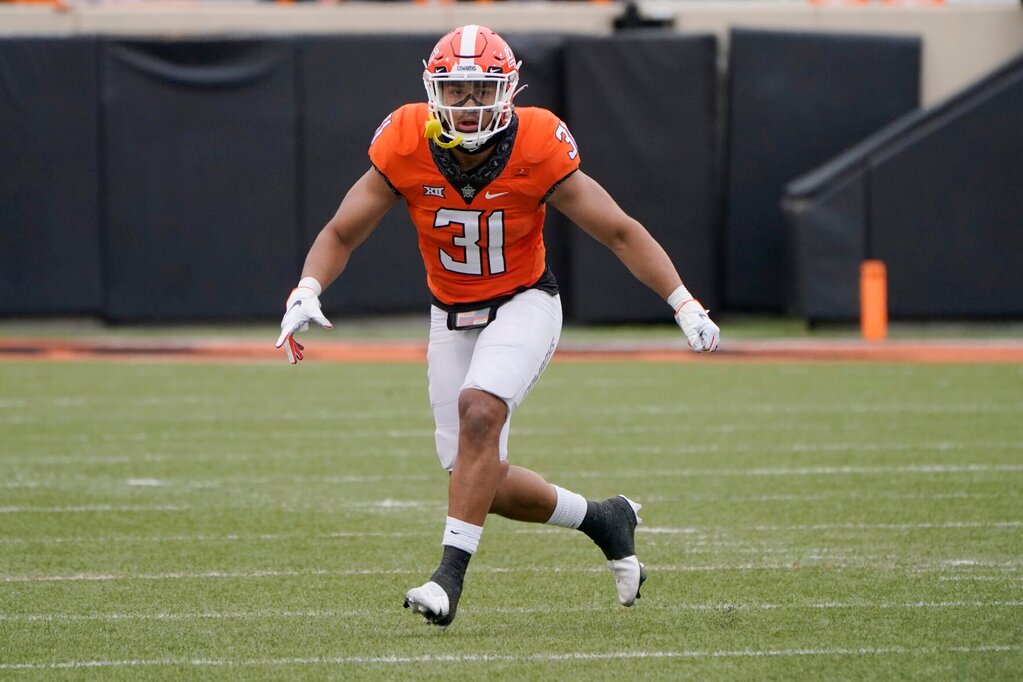 Photo by Sue Ogrocki-Associated Press
Kolby Harvey-Peel is easily the defensive player on the Oklahoma state roster and is just a great combination away from shooting up draft boards. He's very muscular 6' and 210 lbs. with excellent speed and burst to go along with it. He's very instinctual for a safety and has a phenomenal nose for the football. In zone coverage, he displays excellent football IQ and good range on the back end. He has the explosiveness and twitchiness to cover his zone with great effectiveness and he does a great job of timing his jumps on routes. He's very good at reading the quarterback's eyes and his route recognition early in the play is excellent. He takes good angles on passes when the ball is in the air and is great at batting passes when he can reach the catch point. He explodes out of his stance and can accelerate quickly when he sees the ball. He has good to very good speed when he sees a ball going deep and does a nice job of tracking it down and making a play. When asked to play man coverage, he does show he has enough power and size to match up with tight ends and has enough athleticism to shadow them on their routes. He possesses some of the best hands among safeties in the draft because a large majority of his interceptions have come from tipped passes and many of them have had to require a great deal of hand-eye coordination to reel in. Although most of his interceptions are tipped passes, him being in the area of the throw shows incredible instincts and football IQ. He's a very instinctual safety in all aspects of his game, especially in run defense. He's a very good tackler with lots of upper body and lower body strength to wrestle down even the biggest ball carriers. He knows how to pick his spots when attacking the line of scrimmage in run support and does an excellent job of reading where rushing lanes develop and attacking. He's very good in the spy role that Oklahoma State sometimes puts him in and can be a menace to even the most athletic quarterbacks looking to break one for a gain. He's a big hitter when he gets his shot and has enough bulk in his frame to be a consistent punisher in the NFL. He's an excellent blitzer from the safety position, both off the edge or up the middle, and was able to wreak havoc on a consistent basis in 2021. He had an outstanding freshman season at Oklahoma State and his opportunities to replicate that season became scarce as offenses stopped targeting, showing that his last two seasons of inconsistent production don't reflect his ability. He's a high effort, high motor, and highly competitive player who'll give 100% both on and off the field.

Kolby Harvell-Peel is a quicker and that fast kind of player and while he does have sufficient range, he's not a player that can make sideline-to-sideline plays on defense. He doesn't possess the footwork or agility to match up in the slot or on the outside against receivers and asking him to play man coverage in the NFL could be a huge problem for him. He doesn't take great angles when making tackles which has led to some ugly misses. He doesn't create his own interceptions, aforementioned that nearly all of his picks are tipped passes, and will need to learn how to undercut routes and contest catches better. He doesn't attack the football enough when making tackles and will need to become more consistent at trying to cause fumbles. He's strictly a strong safety in the NFL with the potential to be a hybrid linebacker in some schemes, killing his prospects of being a versatile defender.

Kolby Harvell-Peel looked like a lock to be a first round pick after his freshman season but his struggle to build upon that season and show improvement in his overall game. He plays hard, studies hard, and works hard and while he does have his limitations athletically guys with his mentality find a way to start and succeed in the NFL. If he gets drafted by a team that can put him in positions to succeed like playing strong safety and providing help in run support. If he can show that he can add more range to his game and set himself up to make more plays, he'll be a quality starter in his career.