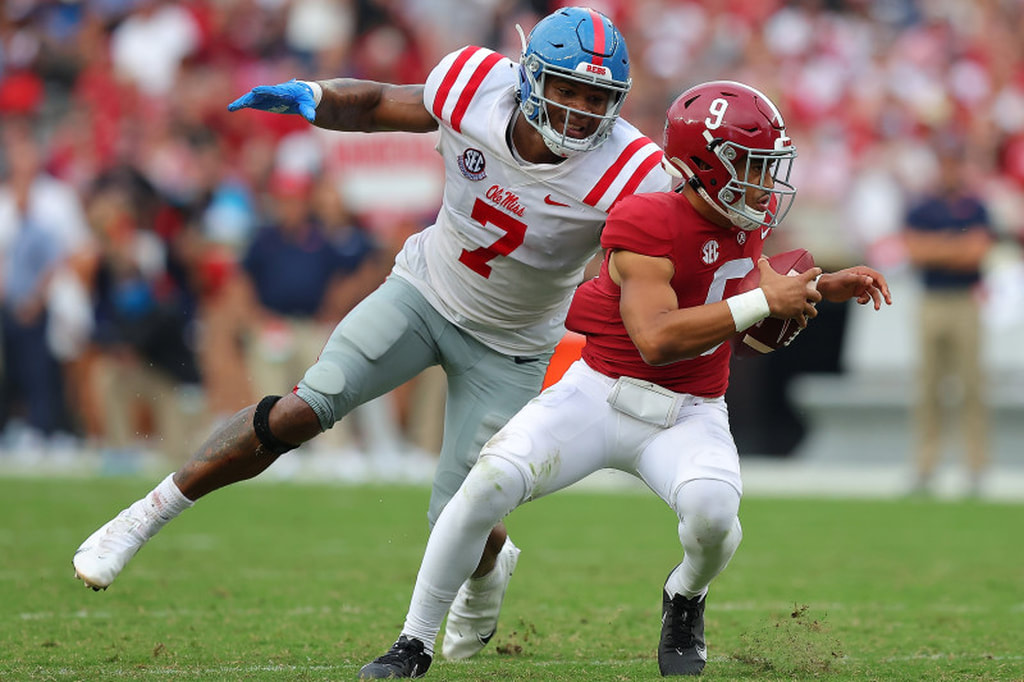 Photo by Kevin C. Cox-Getty Images
Sam Williams' combine performance put him on the map for all 32 NFL teams looking to bolster their pass rush and his tape at Ole MIss certainly shows a player that can have a major impact for a defense off the edge. At 6'4" and 265 lbs., Sam Williams brings elite athleticism, excellent versatility, and great pass rush technique. As a pass rusher, Sam Williams' game is based around his elite level speed off the edge and as you can see by his 40 yard dash, he's got plenty of it to spare. He has good length and size for the edge rusher position and it allows defensive coordinators to feel comfortable with his at any position they wish. He comes off the line with elite explosiveness in his first step and often can run by offensive tackles that struggle with speed. He's very quick with his hands when he makes his initial contact and has found great success swiping and swimming away punches. He possesses adequate flexibility in his frame to rush by and bend the edge. He possesses a very good swim move inside that is certainly helped by his speed and he's been very good at timing as well. He has a decent push pull move when he can beat his opposing lineman with quickness and torque on his move and has shown the ability to play with strength when he can get his hands underneath his opponents pads. He possesses a good spin move in his counter rush game that can get him out of trouble when his initial rush fails and has earned him plenty of second effort plays. He's never been outrun by a quarterback based on his film and when he makes a sack he does an exceptional job of trying to strip the football. In run defense, he plays with exceptional pursuit speed from behind and has shown an ability to establish great tackling angles and bring down ball carriers. He's proven to be a very shifty edge rusher to block in the run game and has shown an ability to dodge blockers and attack the backfield. He plays with a good motor and has plenty of 2nd effort rushes that result in a sack and plenty of tape of him running down ball carries down field. He is a versatile prospect with ample snaps as both a stand up pass rusher as well as from a 3-point stance and his elite athleticism allowed the Rebels to move and use him to create mismatches.

Run defense is by far his biggest weakness and teams drafting need to consider making him a situational pass rusher in the NFL early. He's not an edge rusher that uses power in his game very often on tape and has struggled with dealing with more powerful offensive tackles. He comes out of his stance way too high and when he gets touched by technically sound offensive tackles it's usually game over for that play, just watch him take on Evan Neal in 2021 who manhandled the entire game. Looks often disinterested in defending the run on occasion which made him a target for offenses to attack. He's not as nasty as you would like an edge rusher to be and he'll need to develop more grit in his game to find success in the NFL. Not much leg drive or power in his lower half to bull rush effectively and seems to have lackadaisical approach to getting physical in engagements with offensive lineman. His counter rush game when his initial rush fails needs work as he doesn't have much power in his game already and when his attack initially fails he relies too much on his speed to run around offensive to make a difference in the NFL. A fair amount of his sacks have come against busted blocking assignments, especially against tougher competition like Alabama, and his consistency as a pass rusher needs to be taken in with a grain of salt. He's not a physical tackler by any means and has often found his grip getting broken by escaping quarterbacks. He's had some off the field issues in his past with a Sexual Battery case filed against him that was later released and teams need to do due their due diligence when drafting him.

Sam Williams is going to have to ace interviews with teams that he meets with to get drafted as the NFL tries more and more each year to clean it's image and that's before teams even consider drafting him. He's also got to answer questions about his toughness and grit as an edge rusher because while his tape shows an elite speed rusher off the edge that can be a monster for the right team, questions about "want to" when it comes to making plays could keep him from being a Day 2 pick. With the right coach that can invigorate him and get him to flip the switch as an edge rusher he can be a special NFL talent but it's more of a roll of the dice with him than a coin flip and the risk vs. reward with him is high on both sides. He's a boom-or-bust prospect and if he were to fall to late Day 2 or early Day 3 I expect him to be off the board.