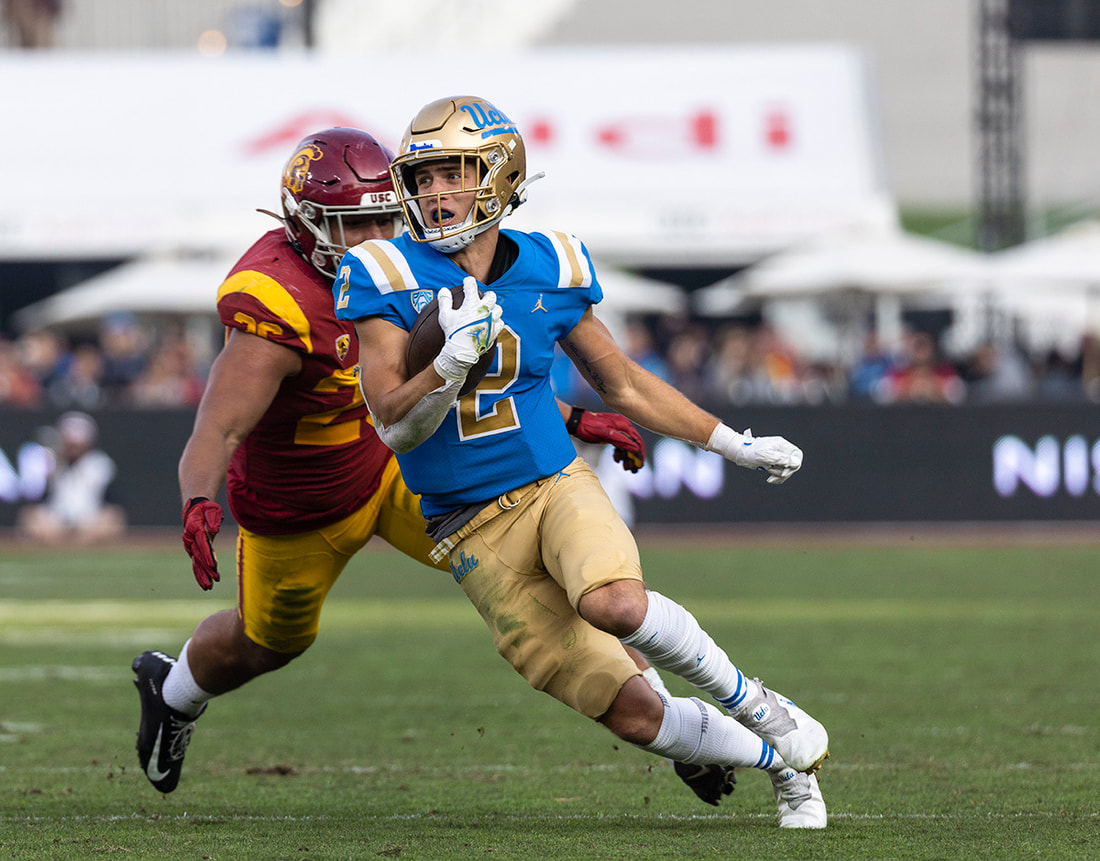 Photo by Ashley Kenney-Daily Bruin
The UCLA Bruins had a good season in 2021 and the most important player to that team's success was wide receiver Kyle Phillips whose play in the slot helped make this team a dangerous opponent in the PAC-12. At 5'11'' and 189 lbs., Phillips brings exceptional route-running, great hands, and elite quickness and agility. Phillips is one of the best pure slot receivers in the NFL draft and certainly made life hell for the unfortunate defenders trying to contain him in space. In man coverage, Phillips comes off the line with excellent explosiveness and quickness and clearly has a plan for how to set up his defender and get open quickly. He possesses elite footwork in his route that allows him to get separation quickly at the top of his routes and surgically attack a defense. He's a highly nuanced and skilled route-runner that can run a large portion of the route-tree with expertise. He's a crafty route-runner who knows how to set up his routes with great success and on many occasions for the Bruins he was relied upon to be the safety valve for his offense with his propensity to get open quickly. He possesses a tremendous football IQ that has shown itself when attacking zone coverage as he picks apart defenses quickly by recognizing openings in the coverage and sitting in them quickly. He's quite the playmaker after the catch as he never seems to be brought down by the first incoming tackler. He's a proven open field tackle evader and can make tacklers miss in confined spaces. He possesses good strength for this size and has shown an ability to break arm tackles and pick more yards. He possesses very good hands and does a nice job of reeling in throw's and protecting the ball from getting knocked out. He was very effective in the red zone with his ability to separate quickly and was an easy target for UCLA quarterbacks looking for a quick catch and run play for six. He's proven to be a dangerous punt returner in his football career with two touchdowns in his last two seasons and an average 19 yards a return. His high football IQ and detailed route-running show a player with a great work ethic and exceptional development skills and teams drafting him to play in the slot and can be assured that he'll be one of the safest players in the draft.

His lack of size and deep ball ability make him strictly a slot receiver in the NFL and because of that teams might not be willing to spend high draft picks on him. He's an average athlete for his size that may struggle in the NFL against corners who can beat him with their athleticism. Rarely, if ever, schemed to go deep on a defense and his route-tree because of that is heavily reliant on short and intermediate routes. Very small catch radius as a receiver and doesn't have many plays of him reaching outside his frame for passes and may need to play with a quarterback that prioritizes accuracy over arm strength. Certainly a prospect that's quicker than he is fast and relies on his ability to maneuver. Fighting through press coverage has been a challenge in his career likely won't change once he hits the NFL. His homerun threat ability isn't there with his lacking speed and may never find himself seeing daylight and taking short passes to the house. He eludes defenders more often than slipping tackles and/or breaking them and I worry that if he can't elude in the NFL he'll be a catch and fall receiver in his career. His lacking length and size offers no value on contested catches and will have to get ample separation from coverage to be a reliable target. His lack of fear of contact in the open field when taking on tacklers, while admirable, is scary when thinking about his longevity for his size and learning how to fight another day could be crucial to his NFL success.

If you need a cheat code in the slot for the 2022 season, Kyle Phillips is your best bet to fill that need. His creative route-running and toughness in the slot brings images of Cole Beasley as Phillips looks like a carbon copy of him on occasion. I don't think he's capable however of making splays outside of that role and teams need keep that in mind when drafting him. He's as pigeon-holed a prospect as you'll find in the draft and in the right system he could be a key piece of an offense.