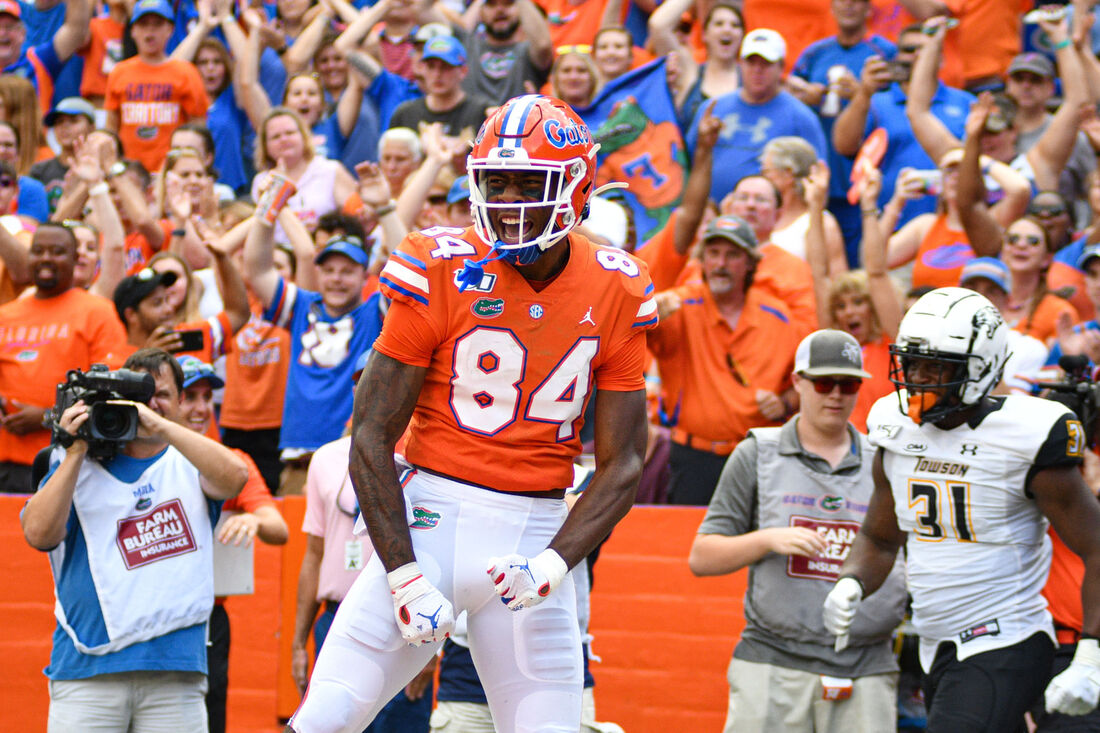 Justin Fields is the undisputed #2 quarterback in this draft class and is likely to find himself going #2 off the board in April of 2021. He's got great size for a quarterback at 6'3" and 230 lbs. with exceptional arm talent and athleticism to go along with it. He's got incredible touch on his passes that seem to glide and fall right into the receivers hands with tremendous accuracy. He's one of the best quarterbacks in college football when throwing on the run and it is awesome to watch. Exceptional at protecting the football both running with it and throwing it and tries to avoid forcing throws into bad situations. He knows how to hit his receivers while scrambling out of the pocket and does an amazing job of communicating with his receivers in order to get them into the exact spot he needs them to be and he never seems to fail. Powerful arm strength allows him to hit all levels of the field and he can put a lot of juice on the end of his pass to laser to his receiver quickly. Surprisingly good footwork in the pocket for a player who has only played one full season of college football. Does a great job of commanding his offense by pointing out blitzers on defense and allowing the offensive line to pick them up. Elite level release when the ball comes out of his hand and does an excellent job of getting the ball out quickly when he feels the pressure. Very athletic in his legs which has allowed him to be a very dangerous player as a on the read-option which he has mastered in a very short period of time since arriving at Ohio State. He has enough burst and speed to quickly elude blitzing defenders and take off down field which he did on numerous occasions. Played with incredible poise and determination in 2020 and while he didn't win the College Football Championship, he showed a level of competitive fire that will lead to success in the NFL. He's as tough as a tank at the quarterback position and shakes off big hits from and painful injuries like their nothing. He's a warrior at the quarterback position with numerous games last season, including the College Football Semi Final game, where is battling it out and fighting back to keep the game within reach. He's a great captain of a ship and has earned a lot of respect and support from his fellow players and teammates since he became a Buckeye.

The knock on him will be his lack of time at the position considering he's only had one year of starters reps under his belt and while he certainly made the most of them, any team that takes at #2 is going to want to see that production at least be repeated in year 2. He plays in an offensive system that features potential 1st round draft picks all over the field as well as a system that plays to his strengths and is still not fully embraced in the NFL. His play can be inconsistent in games at times and can sometimes make a splash  play here and there rather than consistent ball movement down the field. Ohio State has always had a tremendous running game and their quarterbacks over the years have greatly benefited from the 7-8 man boxes that the Buckeye offense commands. Sometimes he's too eager to leave the pocket and throw on the run especially with the offensive line talent he has on the team and he can put himself into some unnecessary difficult throws at times.

​He's an exceptional talent and would likely be the 1st player off the board if he didn't share the draft with Trevor Lawrence but if he puts up another stellar year like he had in 2019, he could make the decision at least difficult for teams to make at #1. He exploded onto the scene at Ohio State in a way no other quarterback has and proved that he can play, and potentially beat, any player in college football. He's going to go in the Top 3 of the draft most likely find tremendous success early in his career.