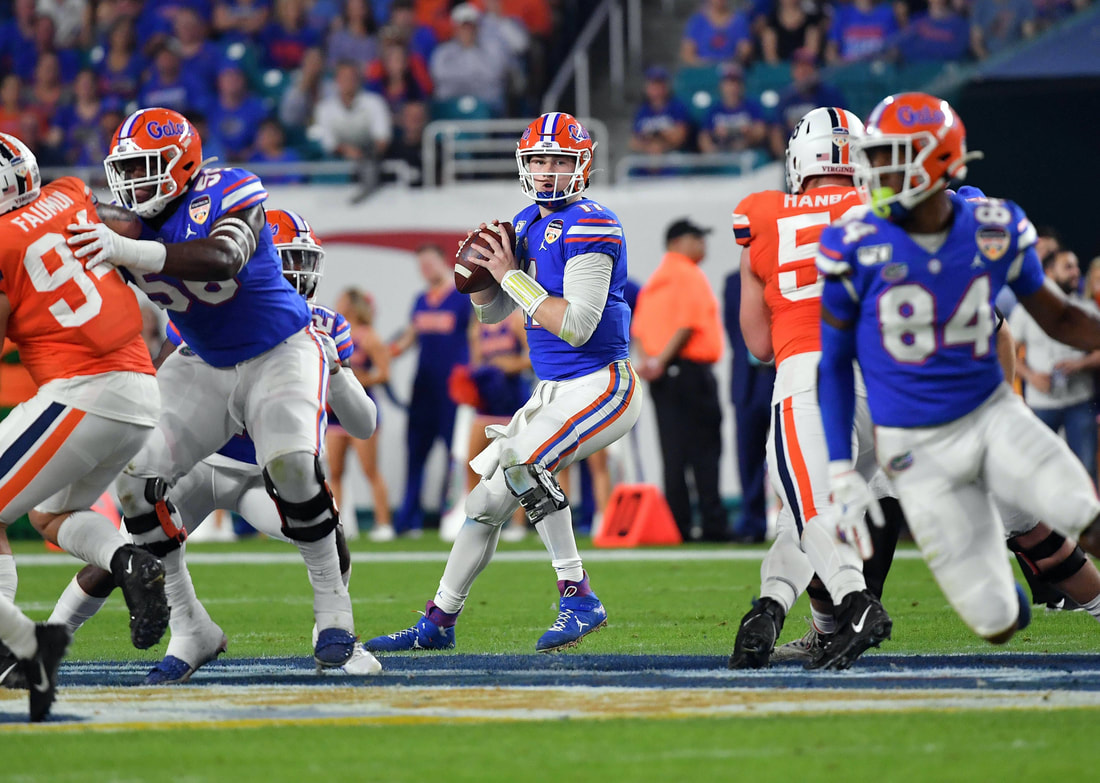 From backup quarterback to promising NFL prospect, Kyle Trask proved last season that he's got great potential as an NFL quarterback if given time to develop and should find himself on an NFL roster come 2021. He's got elite size for the position at 6'5" and 240 lbs. with a thick frame and good athletic ability. Very quick release on his passes allows him to make decisions fast and efficiently. Played very well after being thrusted into the starting role of the offense. He has a very high arc on his passes that keep defensive lineman from swatting the pass at the line and allows his pass to come over the top of the receiver. Very heavily built with good strength in his frame allows him to get extra yards when he takes of from the pocket and Florida did on occasion have designed runs for him to take advantage of his size. Does a good job of getting rid of the football when his protections break down and is always aware of his safety valve target. The Florida offense is an NFL style offense which is going to be an easier transition top the NFL than most prospects. Very accurate on shallow passes and has very good anticipation when throwing his passes. He does an excellent job of being poised and patient in the pocket and has some good anticipation of pressure. He's got good touch on his passes and has shown that he's capable of throwing on the run. Isn't too antsy to pick up yards with his legs even though he's capable. Very effective with his pump fakes and look offs and clearly showed he was studying behind Feleipe Franks and preparing for the position. He has shown to have a short memory when making mistakes which is a great quality to have in the NFL.

He's careless when throwing the football at times and will take unnecessary risks to pick up yardage. He can revert to a sand lot style of quarterbacking on short passes and it can look very ugly and dangerous at times. Average arm strength for a big quarterback and it shows on his deep passes which seem to lose their mustard half way through the process. He has very much relied on his receiving corps to make up for his flaws like Kadarius Toney and Kyle Pitts, both of whom are likely to hear a phone call on Day 1 of the draft. Decision making can be an issue when picking his targets and I would like to see more command of his offense by calling audibles and making changes at the line. He was very reliant on his offensive coaching staff to give him plays that suit his skill set and going off script can lead him into trouble. He has a tendency to hold onto the football for far too long and he'll take unnecessary sacks. Part of the reason he appears to have average arm strength is his poor mechanics when making throws. His footwork is underdeveloped and too often is throwing off balance which causes his passes to sputter and occasionally fall short.

He's going to ride the bench for at least a couple seasons, hopefully behind a competent quarterback, and maybe one day he'll get his shot to man the helm of a team. His intangibles and raw skills make him a promising project player in the right scheme and coach. If he can fix his mechanics and show that he doesn't need immense talent around him to make plays, he could be one of the biggest steals in the draft.