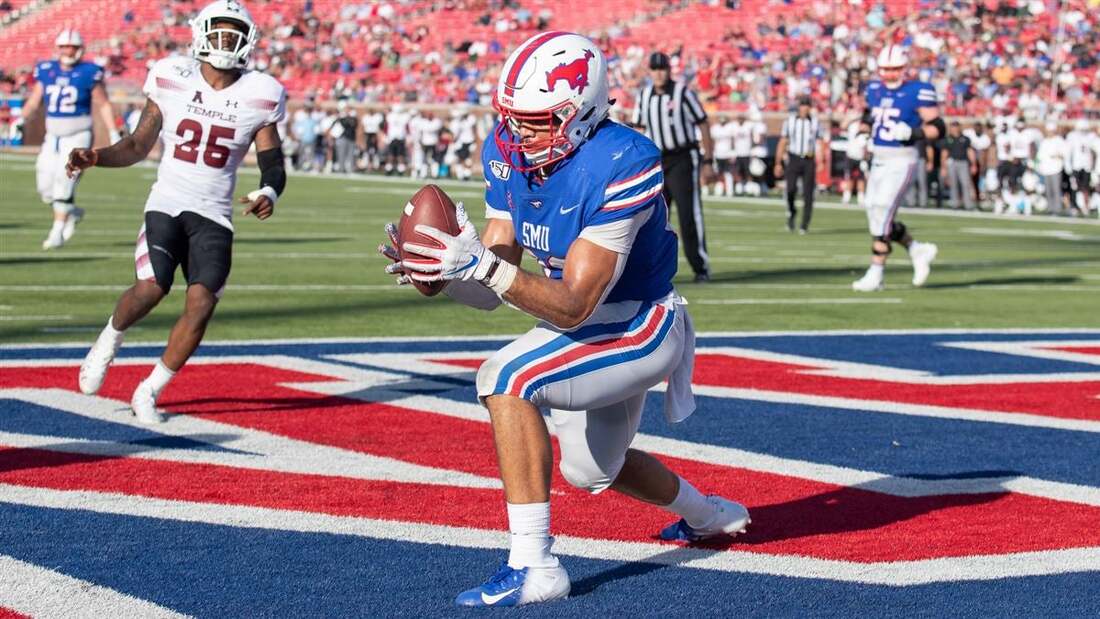 Kylen Granson was a tremendous playmaker for the SMU offense in 2019 after transferring from Rice University. At 6'3" and 240 lbs., Kylen Granson is built to catch the football and pick up yards which is exactly what he did for the Mustangs. He's probably going to be one of the fastest, if not the fastest, tight end in the draft based on his film and his supreme athletic ability. SMU lined Granson up all over the field and even at times took hand-offs on sweep plays, making him easily the most versatile tight end in the draft. Not only is he fast but he's also incredibly agile with many highlights of him juking or spinning out of his first defenders tackle. If he has green grass ahead of him, expect him to get points or at least close to it because he has top speed that even the best college football defensive backs will have trouble dealing with. He's a dangerous player at every level of a defense and will hurt a defense if left alone. He creates separation very well with his speed and agility as well as using his extra size to muscle defenders off of him in press coverage. He's a very good route-runner with a good sized route tree and will give safeties and linebackers fits in one-on-one coverage. He's got excellent hands and does a great job of bringing in passes and holding on through contact.

He's a very bad blocker not only because of his lack of strength in his frame but also his overall technique. Too often is thrashed and thrown away by defenders he engages and more often than not blocks them into the play rather than out of it. He comes off the line too high to stop defenders in the trenches and usually finds himself backpedaling when he's blocking them solo. He doesn't go after the football in the air enough and can struggle at times with contested catches. He's not a great red zone player as he seems to struggle getting open in tight spaces and his lack of height and arm length make him harder to throw to than most tight ends.

​He reminds me of Jordan Reed with his athletic ability and size but his lack of effort and aggression in the running game doesn't bode well for his future. If he can get with creative offensive mind I think he could have a productive career in the NFL. He's likely a Day 3 pick in the draft but could find himself hearing his name called at the very end of the 3rd round.