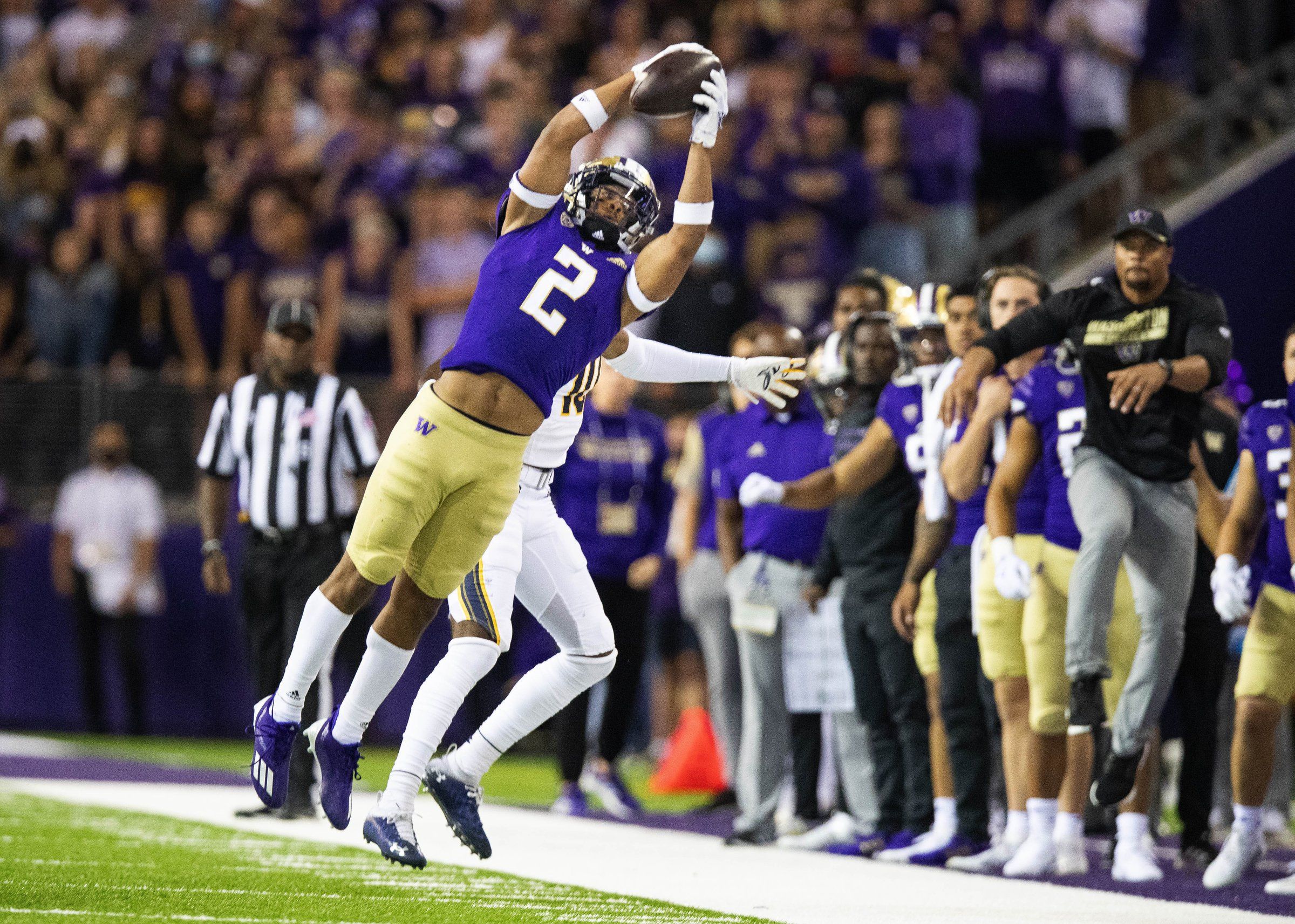 Photo by Dean Rutz-Seattle Times
The Washington Huskies have become a contender for DBU when it comes to the NFL draft as they seem to put defensive backs in the pros every year and with Kyler Gordon skyrocketing up draft boards it would appear that the Huskies have put another great prospect into the NFL. At 6' and 200 lbs., Gordon brings exceptional athleticism, coverage technique, versatility, and tackling ability. Kyler Gordon's athleticism on the field is probably the first thing you notice as he can fly around the field effortlessly and attack the football with immense explosiveness and he should be a corner to watch at the NFL combine. He's not overwhelmed by size on the outside given his own very muscular frame and his speed and agility allow him to match up with any skillset a receiver has. In man coverage, Gordon does a phenomenal job of being patient in his back pedal at the snap and doesn't fall for stutter steps or bite on sluggo routes in coverage. He plays low in his back pedal and has his eyes glued to the receiver early and doesn't lose focus at any point in his coverage. He doesn't get handsy or too aggressive downfield and can be trusted not to draw pass interference calls. He has good length at the cornerback position and had great success in 2021 at batting passes. He has elite recovery speed if he does get fooled a bit and it allows him to always stay in the play. In zone coverage, he has exceptional range for a cornerback and his explosiveness also makes him a dangerous person for quarterbacks to test. He takes great angles when attacking the football when passes are thrown into his area and he's at the very least disrupting the pass or making a tackle. He does a nice job of recognizing routes at the snap and can follow the bread when it comes to the quarterback's intended target and often forces them to look elsewhere. He has more than enough athleticism to cover tight ends in zone, as well as in man coverage, and can be a competitive match up for them in jump ball throws. In press coverage, he's very aggressive at the line and can jam his receivers routes very early. He makes them work hard to stay in line on inside routes and often forces quarterbacks to wait an extra second or two which can either lead to a sack or force quarterbacks to deviate and look elsewhere. He's very good at matching up with bigger receivers in press and crank up the aggression when facing bigger matchups. He's shown the ability to ride his opposing receivers on the boundary and can either minimize their landing area or completely force them out of bounds. In run defense, like all Washington defensive backs, Gordon is elite with his ability to tackle running backs with exceptional aggression and technique. He tackles head-on when engaging ball carriers and he's quick to drag them down. He takes excellent angles when chasing the football and can cut the legs out from under ball carriers with ease. Although not often used as a blitzer, he can attack the line of scrimmage with great burst and aggression and has had success on the rare occasions that he's been asked to do so. He can pop the football out onto the turf as a hitter and He's a versatile cornerback prospect as most Husky corners with his ability to play in the slot as well as on the outside at a high level and teams that need a player that can line up anywhere should have him high on their board.

Kyler Gordon isn't without his flaws and one of his bigger issues coming into the NFL will be his ball skills which average at best and he could do a better job of bringing interceptions rather than simply batting passes away. He does come from Washington which has talented corners and safeties all over the defense, like Trent McDuffie who's also a top cornerback prospect in this draft, and while he certainly stood out among his peers, he certainly benefited from them as well. Kyler Gordon's 2021 season is a relative outlier compared to his previous two starting seasons, however his 2020 season was cut short due to Covid-19 which was a year that was supposed to be big for him. His two interceptions in 2021 came from one game against UC Berkeley and those are his only interceptions in his career.

Kyler Gordon could end up being one of the first corners off the board after the combine and pre-draft workouts as his stock continues to rise up draft boards but teams are starting to recognize him as one of the better cornerbacks in this draft. His highly polished coverage skills and toughness in the run game are extremely enticing for teams in today's NFL and if he excels throughout the draft process sky's the limit as to where he will go. He has one of the higher floors among cornerbacks in the draft and could be a pro bowl corner early in his career and at the very least will be a quality outside corner.