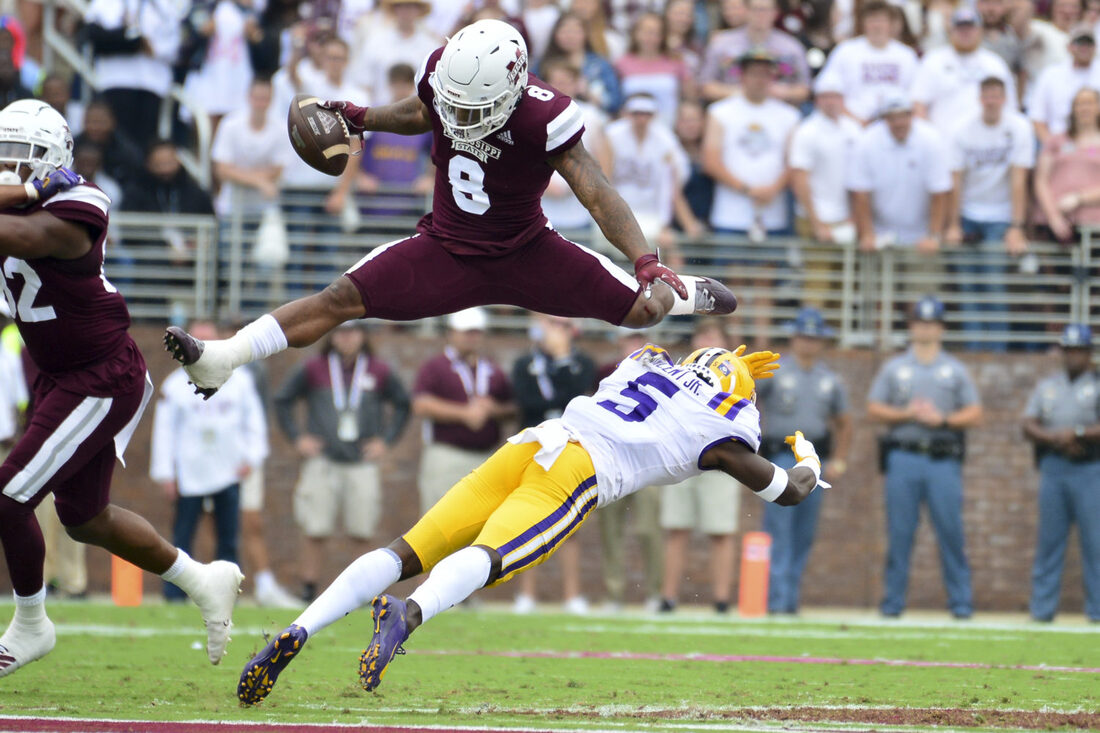 Kylin Hill turned Mississippi States rushing attack into a potent presence in 2019 and will likely repeat his performance now that K.J. Costello has come to the Bulldogs. Kylin Hill is built like an every down back at 5'11" and 210 lbs. Good athletic ability and a tough running style. He's a rough and gritty running back who will run through a wall to get into the end zone. He's a muscular and powerful running back that can push a pile in order to get to the end zone. He's a powerful presence in goal line scenarios and will kick, scratch, and claw to meet his goal. He can lower his pads and lay the wood on a defender and can be an intimidating runner when he gets going. Above average agility in his feet and he can be a dangerous player when given space. He has quick feet that allow him to juke defenders and get up field fast. His arms are longer than you would expect a 5'11" running back to have which helps him stiff arm defenders off of him. He's got above average explosion in his legs and, as seen in the picture above, is no stranger to hurdling defenders. He's got a powerful stiff arm that can bury corners and safeties if he hits his mark. He's got good ball carrier vision and does a nice job of finding holes before they open up. Follows his blockers and doesn't break away from the play unless he has to. Powerful legs allow him to drag defenders a few yards and rarely is tackled by a solo defender.

He's not going to out run any defenders in the NFL and is not going to break any runs for a house call. He needs a bit of a runway in order to reach top speed and has on many occasions been caught from behind. Too often late on cutbacks and finds himself getting tackled behind the line. Too often lets his aggressive running style get the best of him and will look to create contact with defenders. His aggressive running style could pose a threat to his NFL shelf life and he will need to work on taking the path with less resistance when running the rock. He has shown an ability to catch the football but he hasn't been as consistent a receiver as you'd like to see and he'll need to show in workouts that he can effectively catch passes and get up field.

He reminds me of a Mark Ingram type running back with his aggressive running attack and his discipline on plays but he's going to have to expand his skill set if he wants to see the field more often in the pros. If he can prove his worth in the passing game by catching more passes and being effective at getting free, he could be the steal of the draft. Otherwise, he's just a short term power back in a team's rushing rotation.