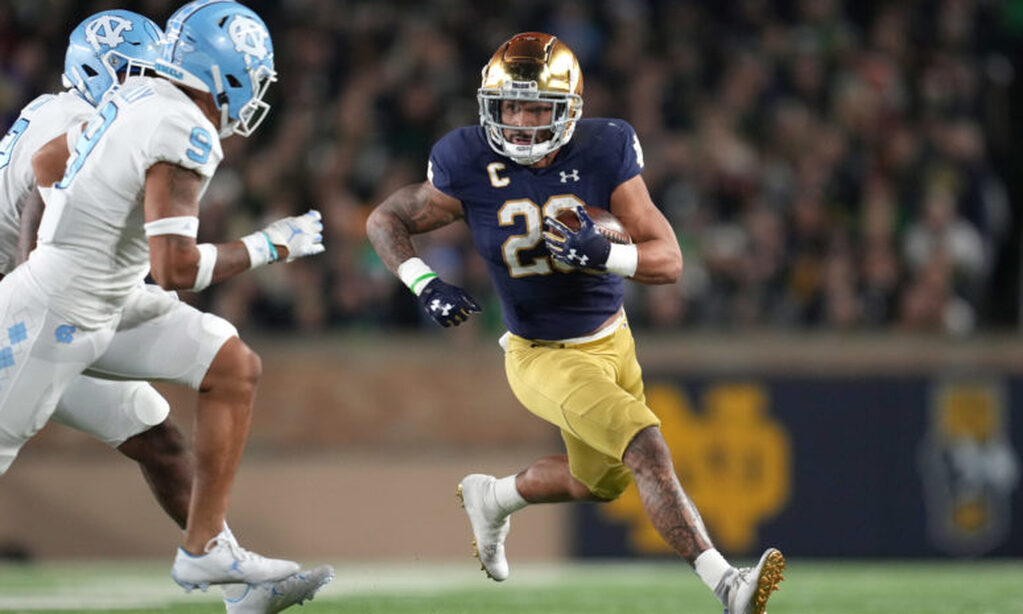 Photo by Robin Alam-Icon Sportswire via Getty Images
The Notre Dame Fighting Irish had one of it's best seasons in years after squeezing into the college football playoffs and the biggest reason for their success has to be the play of running back Kyren Williams. At 5'9'' and 195 lbs. Williams brings exceptional agility and quickness, excellent toughness, and phenomenal versatility. Originally recruited to play receiver at Notre Dame, Williams converted to the running back position and became the best receiving back in college football in his first season with the Navy Blue and Gold. He possesses elite quickness and agility at his size and can be a nightmare to tackle in the open field as well as in the phone booth with his ability to evade tackles and keep himself moving. He possesses excellent ball carrier vision allowing him to run between the tackles as well as bounce runs outside and still find rush lanes opening up in a defense. He's very good at making his first tackler miss and jetting up field and if he has daylight in front of him he's highly capable of taking runs to the house. His ability to stop on a dime and set up defenders for jukes and spins is what made him such a difficult running back to tackle and it's a skill set of his that will translate very well at the pro level. As a receiver, Williams offers elite level hands for a running back prospect who's had success snatching the football with one hand and two and he will be a huge asset to an offense as a 3rd down back. He's very good at making himself a difficult target for tacklers, especially those looking to level him and he's good at bouncing off defenders and keeping his feet. He has a pretty good stiff arm for running back his size and has planted incoming tacklers on multiple occasions. He can run excellent routes for a running back and he has snaps both as a receiving back as well as slot receiver and a creative offensive coordinator will love being able to scheme all over the field. He was an invaluable asset to the Notre Dame offense as safety valve and receiving option but his blocking ability for a running back is excellent not just from a technical standpoint but also from a toughness standpoint as well because he's not afraid to duck his head hit charging linebackers. He's excellent at blitzing up with his ability to recognize blitzers at the snap and does a nice job of getting low in his blocks to insure that he gives the quarterback the maximum amount of time possible to make a play. He's a tough runner who could, if you absolutely needed him to, run between the tackles on a regular basis and his willingness to run into the teeth of the trenches is very admirable.

Kyren Williams won't be confused with a powerback at the professional level despite the ability to run hard into contact and through it and won't much of a short yardage back outside the passing game. Ball Security can be an issue for him at times with his propensity for tough running and lacking size to insure that he doesn't fumble and teams will need to teach him to fight another down. He's quicker than he is fast and while he can burn defenders for big runs, his speed won't blow you away and I would expect NFL corners and safeties to catch up to him when he sees green grass in front of him. He can be too quick at times to bounce runs out and make a big play and while he's certainly capable of cutting back and getting up field, he'll need to trust his blocking in the pros because NFL defenders more often than not make those tackles for loss. Not overly explosive at the running back position and needs some room to get up to top speed. His contact balance can be an issue as well as his size as he can get knocked off balance and tackled easily and learning to keep his feet under him when he gets hit will be key for his development. ​

Kyren Williams is another running back that fits the mold of an every down player heading into the NFL. HIs elite agility and versatility are at a high premium currently in the NFL and if teams need a do-it-all running back that stays on the field, Kyren Williams is your man. If teams draft and expect him to be a 25+ carry running back in the NFL however I would worry about his durability in the NFL. He's at the very least a potential gadget back in the NFL but his ceiling suggests that he could be a match up nightmare all over the field for an offense.