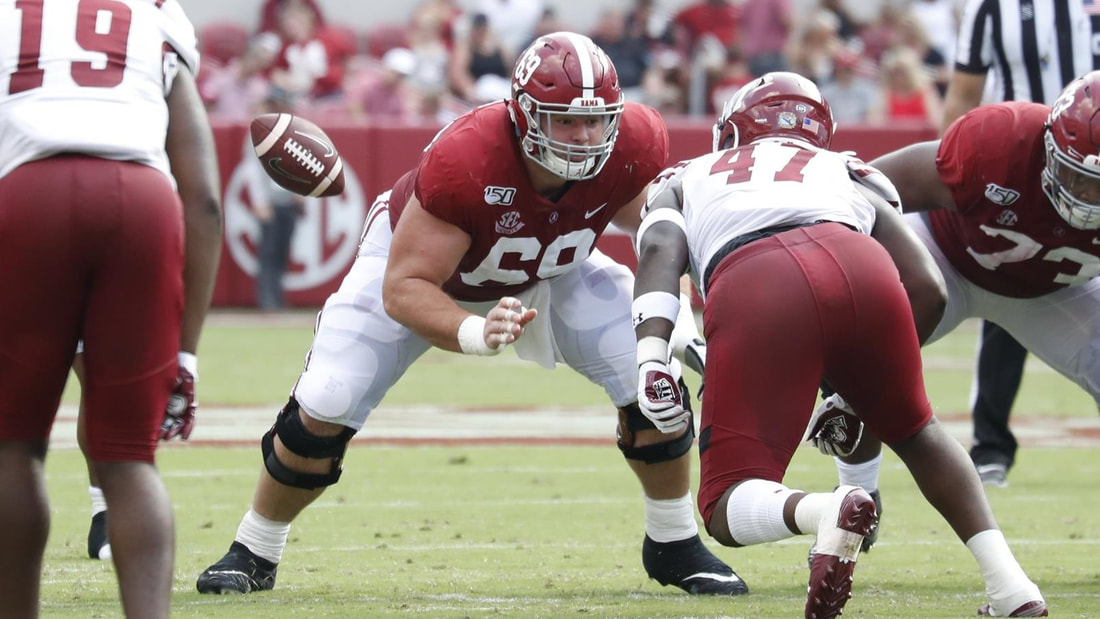 Landon Dickerson has played a vital role this season for the Crimson Tide by opening up holes in the middle of their line and giving Najee Harris plenty of opportunities to attack the middle of the defense. He possesses a tremendous build for a center at 6'6" and 325 lbs. with great length and a powerful lower base. He has experience playing both guard and center and has succeeded at both positions. He's a very good run blocker as a center with great leg drive and aggression coming out of his stance. Has dominated in the trenches on power run plays where he can simply drive his man off the ball and create a hole. He has great hand strength and long arms for a center that help with keeping defensive lineman out of his pads. He's a very aggressive run blocker that plays with a nasty streak. In pass protection, he keeps a wide base that helps him stall bull rushes and prevent the pocket from collapsing on his quarterback. He's effective at double teams in the middle and does a nice job of helping out his fellow guards in time. His punch is very effective with his length and it has proven to be a task for shorter armed lineman to counter or defend against it. He has played against the best lineman in college football and has held his own consistently, which shows that stepping into the pro's won't be such a difficult transition.

His downfall has consistently been against defensive lineman that can beat him with quickness, which is usually the case. He has trouble with swim moves and stutter steps by lineman and has on more than one occasion found himself misreading and falling over. His pad level needs improvement as he loses battles to smaller lineman more often than he should if they can get underneath his pads. He lacks the desired speed to reach the second level or pull as a center and his lateral ability is questionable as well on combo blocks. He has trouble against stunts and twists and he has shown issues with recognizing them as well. He plays in a rather simplistic rushing style offense at Alabama and may need a specific scheme to thrive in. He has had to make calls at the line very often and will need to prove that he can in team interviews.

​His best position might be playing guard in his NFL with his style of play but it's worth a try to have him man center with his level of play as a run blocker. His versatility is going to make him a valuable commodity in the draft and his rare size for the position will intrigue some teams.