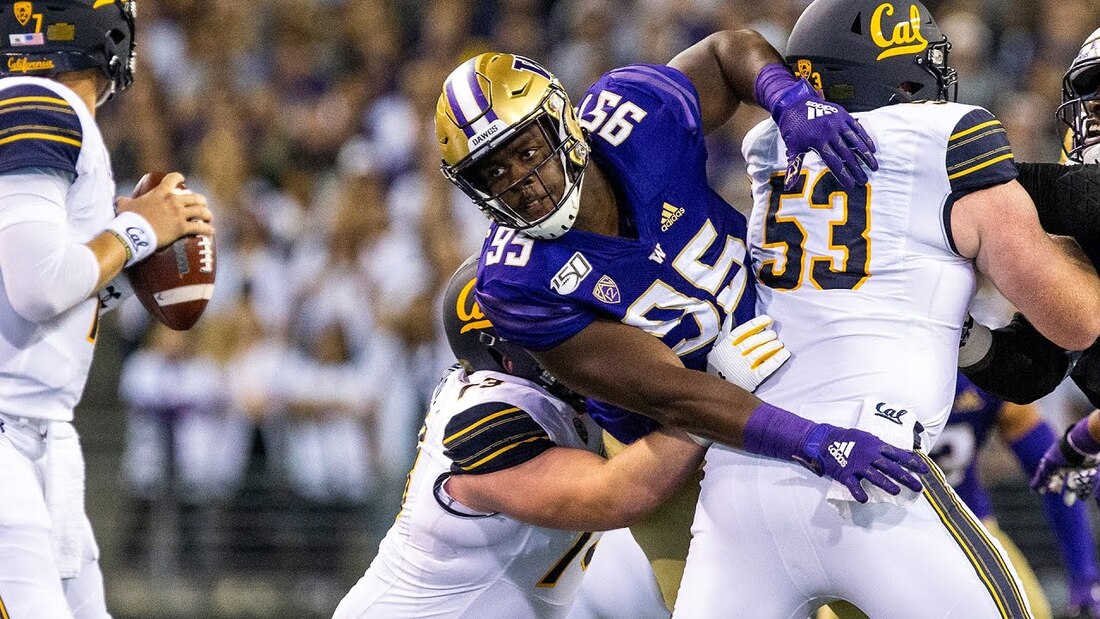 Levi Onwuzurike is a freaky athlete on the Washington defensive line that could find himself shooting up draft boards next season. He's got exceptional overall athleticism at 6'3" and 295 lbs. with fantastic length in his arms. He's got tremendous power in his upper body and arms and it's on full display when he's bull rushing offensive lineman. He has a very fast and powerful punch that is like vise grips when he gets attached. Excellent burst off the line of scrimmage with very good pad level and fast hands to swipe and shed blocks quickly. He has some serious speed for a defensive tackle and is often seen on tape chasing down running backs and quarterbacks. He has a decent swim move and has a spin move that he uses as a backup plan or a counter rush move. He does a great job of flowing down the line of scrimmage and wreaking havoc in run defense with his agility and power. He has played all over the defensive line for the Huskies and offers some positional versatility.

He so far hasn't been as productive as a player with his physical gifts should be. He has played mostly as a 1-tech defensive tackle or nose guard but is far too light for the position and will likely have to either gain substantial weight or move positions in the NFL. He doesn't possess a lot of pass rush moves in his repertoire and will need to expand it in the NFL. He does a bad job of piecing his moves together and too often is leaving his chest vulnerable for offensive guards to attack. He's either shooting into the backfield and wreaking havoc or is going for a ride after an offensive lineman gets into his pads and drives him off the line. He can get lackadaisical with maintaining his pad level and his game can suffer from it.

​He's a phenomenal athlete with lots of potential as a pass rushing 3-tech or defensive end in 5-tech because I don't believe his home in the NFL will be as a nose guard or 1-tech. He's too light and too talented to play the position and it's very rare that a defensive lineman with his size can thrive. His production has suffered in a major way with his position and if he can show up as a pass rusher in 2020 and really bump up his stats, he could shoot up draft boards. He's going to be a prospect to keep an eye on next season and could be picked surprisingly high.