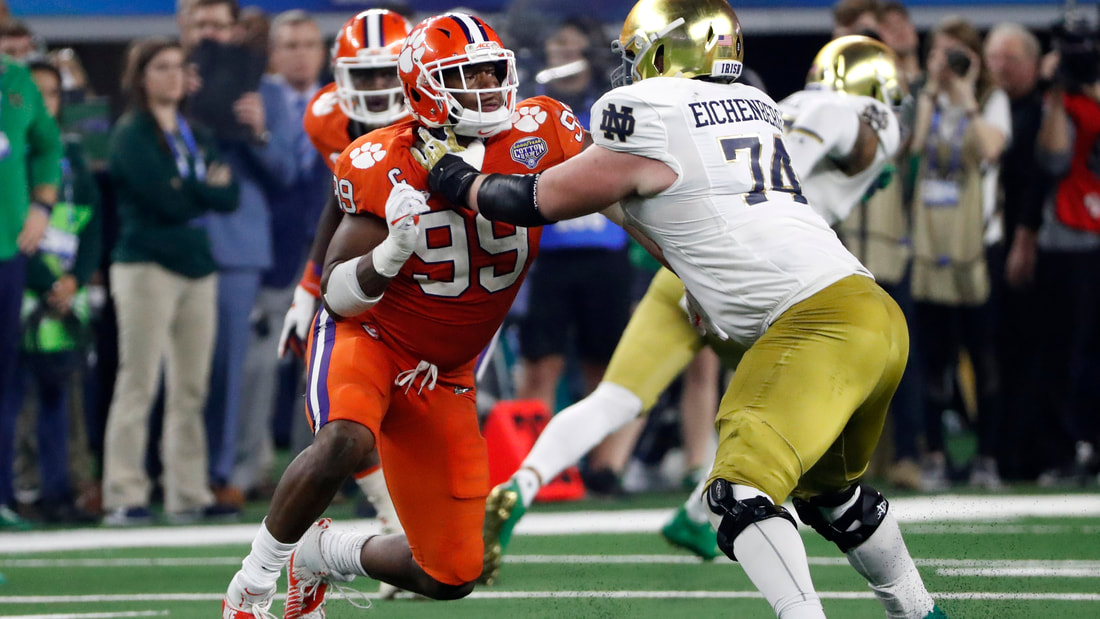 Liam Eichenberg has been a steady presence at the offensive tackle position for the Fighting Irish and will be looking to make his mark in the NFL in 2021. Eichenberg is built like an NFL offensive tackle at 6'6" and 310 lbs. with long arms and a powerful upper body. He's got a very powerful punch that will knock even NFL defenders to the turf if they're not careful. He's got big hands that can be like vice grips when opponents try to shed him off. Good body lean and balance in his base that allows him to withstand powerful defenders attempting to bull rush him off the line of scrimmage. His long arms do a great job of keeping defensive lineman out of his chest as well as giving him distance from spin moves and swipes. Does a great job of popping out of his stance and keeping his opponent in front of him early.  He does a good job of hand fighting in pass protection and keeping his opponent from getting into his pads and setting up a pass rush move. Recognizes stunts and blitzes very well and rarely gets fooled or taken advantage of in those situations. He's a very nasty run blocker when an offense asks him to lead the way on power runs and stretch plays and does a great job of walking his guy back or turning him out of the hole. He comes off the line with good leverage and if he's squared up on his guy, he will run them over. He's been a huge asset to Fighting Irish in short yardage situations as he's been a consistent presence when they run the ball to his side of the field to pick up the line to gain.

He's not as athletic as you would expect an SEC offensive tackle to be, especially in terms of his speed and quickness which is severely lacking for an offensive tackle. He has trouble mirroring edge rushers with speed when he pops out of his stance and they can effectively get by him if they attempt to bend the edge. He can get caught leaning too far ahead of his pads when trying to ride them out of the pocket and find himself leaving his inside gap open for other defenders or for his opponent to spin back into his lane. He has trouble engaging defenders in the 2nd level of a defense after beating his initial guy off the line with linebackers and safeties having more mobility than he can handle. His punch accuracy is very questionable at times against speedy defenders and can at times find himself fielding holding calls from refs.

His future is likely to be at right tackle in the NFL but I wouldn't be shocked if he finds himself playing guard in the pros due to his lacking lateral quickness. His play in 2020 was exceptional and if he finds success playing on the right side for a team early, I can certainly see him getting pushed onto the left by the end of 2021.