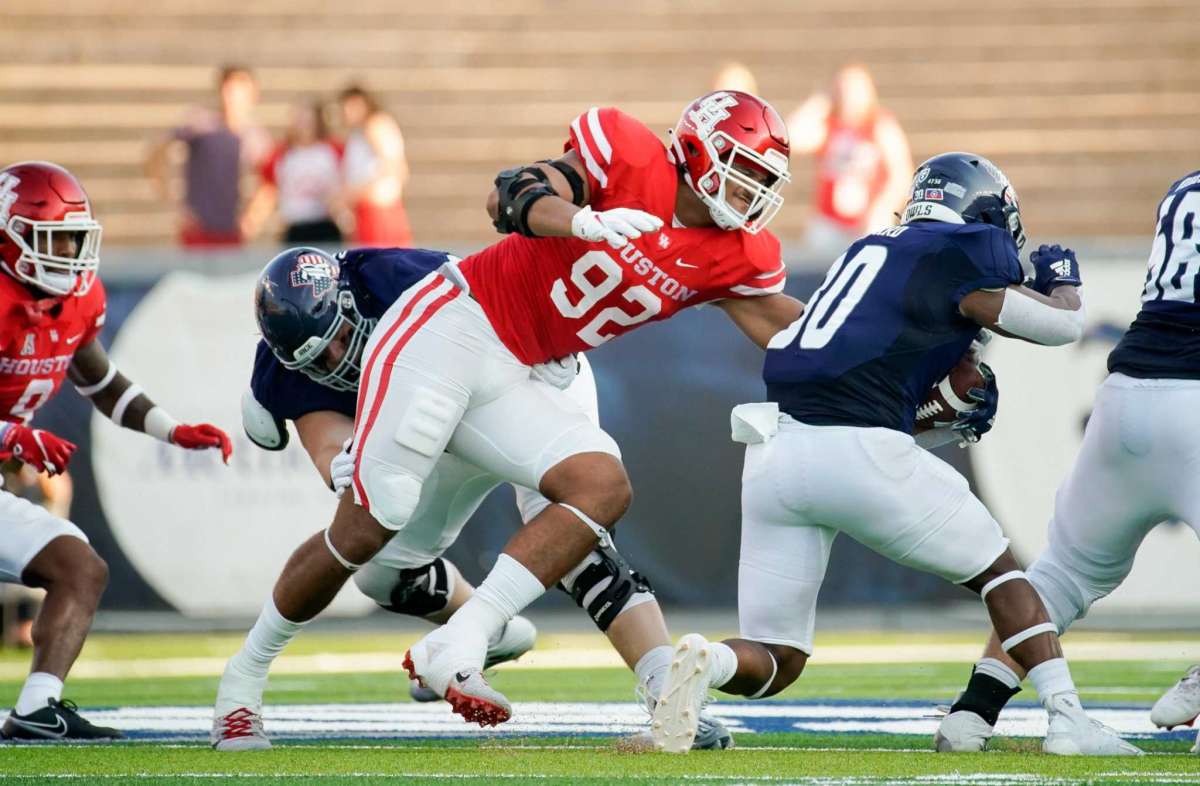 Photo by Godofredo A. Vasquez-Houston Chronicle
Houston University every few years coughs up a draft prospect that teams go head over heels for with defensive tackle Ed Oliver and William Jackson III being a few of note and Logan Hall is certainly finding his draft stock soaring as of late. At 6'6" and 276 lbs., brings phenomenal athleticism, excellent length, and ridiculous power in his frame. He's been a sleeper on many draft boards early in the college football season with his physical and athletic traits and in 2021 he put it all together with technique and tenacity. As a pass rusher, he comes off the ball with a high explosive first step and really improved his pad level at the snap from last year. His power in his frame, especially in his torso, is elite among NFL draft prospects and when he punches and makes contact he can upend and topple offensive lineman. He has heavy hands when he punches and when he gets a grip on his lineman he can absolutely ragdoll them to either rush up field or shed blocks. His bull rush is a sight to see when he gets his hands into his opposing lineman's chest pads and he can not walk offensive tackles, guards, and centers in the quarterback's lap but he can at times overwhelm and run them over. His elite length in his arms allows him to be a matchup nightmare for many guards and centers that often lack arm length. He possesses a very good array of pass rush moves with his signature, outside of his bull rush, being his swim move which he uses with phenomenal power and speed that can turn offensive lineman into turnstiles quickly. He has excellent flexibility in his frame to bend and squeeze through cracks in the line, allowing him to make plays even when he's getting blocked. His powerful arms, torso, and hands have given him an extremely powerful-push pull move or dip-rip move that allows him to penetrate the pocket. He possesses excellent quickness and explosiveness in his lower half which allows him to treat interior offensive lineman like offensive tackles, often allowing him to separate and slip by in the blink of an eye. He has a great spin move that he uses as both an initial move as well as a counter rush move which helps him stay in plays and continue to wreak havoc. He's a violent and malicious hand fighter when he makes contact and, when combined with his length, allows him to keep his chest clean and swipe away punches which only helps more when getting by offensive lineman. As a run defender, he plays with the right nastiness and demeanor to be a reliable run defender if caught off guard. He possesses excellent power in his lower half to hold up against double teams and is extremely good at getting skinny and digging his heels in, often forcing the running back to cut around him giving his fellow defenders a better shot of making a play. He has excellent pursuit speed when he gives chase to ball carriers and displays very good tackling skills. He's lined up on the edge as a 4-3 and 3-4 lineman as well as in the interior lineman as a 3-tech, 1-tech, and nose guard on passing downs which makes him one of the most versatile defensive lineman in the draft. His development technique from 2020-2021 is beyond extraordinary which shows he has a very high football IQ and an advanced understanding of the game. His best attribute to his game is white-hot motor that appears to have a broken off switch because this guy will play through the whistle, run down field trying to give chase to receivers and running backs, as well as make plays from sideline to sideline. He's a high effort player that plays with an extreme competitive spirit which is going to make him a very desirable prospect for many defensive coordinators. You could tell that watches film and understands how to properly game plan for teams as a great portion of his stats come in the beginning of games and offensive coordinators at half time often have to adjust their protections to ensure that he's at least doubled or chipped further showing the football IQ, effort, and competitive nature that made him so difficult to block in 2021.

He's got to fill out his frame more considering at his size he has the room for or he'll risk being considered a tweener prospect. He's only had a year of solid production which gives teams worries that he's a one year wonder prospect. Although he lined up all over the line, his build makes him primarily a 5-tech end or a 3-tech defensive tackle which makes him a more limited prospect than Houston made him out to be. His lacking mass could make him a liability in run defense and will need to beef up considerably if he wants to take snaps in the interior on short yardage plays. Due to his 6'6" frame, maintaining his pad level consistently can be a struggle for him. I would like him to try and bat passes at the line more often given his length and how effective he could be at wreaking havoc in the pass outside of rushing the quarterback. He can get caught on occasion when tries to initiate moves too early and when lineman get a hold of his chest, he can struggle at times to break away. Reading and recognizing run plays in the trenches has been a task for him in 2021 and he'll need to better understand how to read blocks and sniff out the football to become a more consistent contributor on defense. He also could do a better job of trying to attack the football when making sacks or tackles in order to cause turnovers. He has average lateral quickness at this point in his career and continuous work on his change of direction, combined with his high motor, will help his NFL success.

Logan Hall is an interesting prospect in this draft not because of his late rise up draft boards but because with his size and weight it's very hard to wrap your head around that a man giving up at 40 lbs. to interior lineman can wreak so much havoc in the backfield. I think he can play anywhere on the line but he's going to need to build his body to the position because he'll have trouble in the NFL holding up against the run. His pass rush ability however I have no issues with and I believe that those skills will translate very well in the NFL. If he gets paired with a defensive coach that has a specific role for him that allows him to utilize his ability to its fullest potential, he has pro bowl potential with his floor being a quality starter in the NFL.