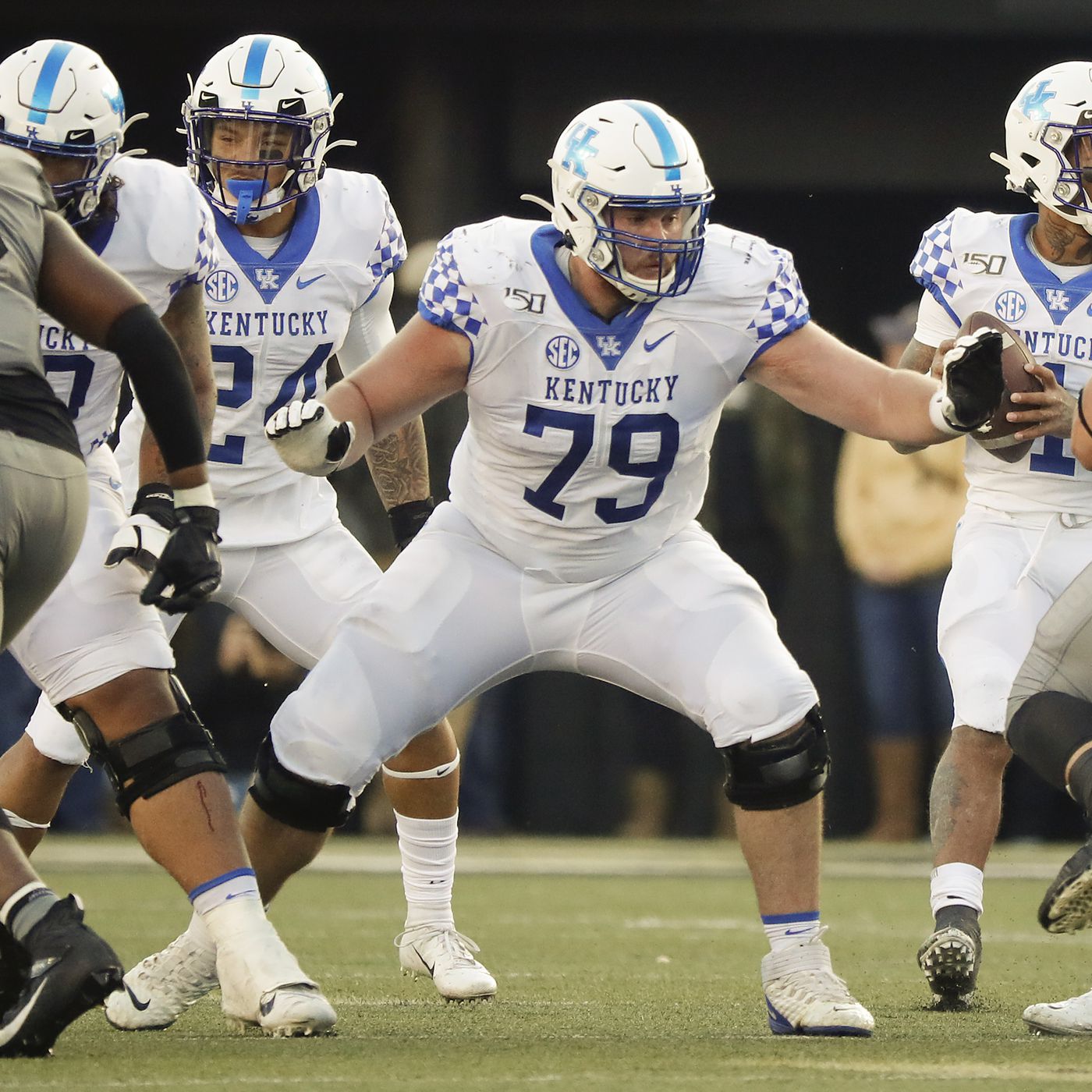 Photo by Frederick Breedon-Getty Images
Kentucky has been an NFL team that has produced quite a few running backs and lineman in the last decade and this past year is no exception with one of the better players on the roster being center Luke Fortner. At 6'6" and 301 lbs., Fortner brings impressive length, immense power, and exceptional football IQ. It's very rare to have a center prospect be at 6’6” and despite his rushed insertion into the position, Fortner played very well. In pass protection, Fortner does a great job having a wide base of the snap to anchor himself a bit against bull rushes from lineman and more than enough power in his frame to slow them down from collapsing the pocket. He has a powerful punch off the line when it lands and can jolt and upend lineman early in their reps. He has bear paws for hands when he locks in on his defender and doesn't let go until the play is over. He possesses great length for the position in his arms and if he can get to his opposing player early off the snap he's highly capable of beating them with his reach. Kentucky's passing attack features quite a bit of screens and misdirection plays that often involve quite a bit of movement from interior lineman to get into position and he did so extremely well. He displays great mobility on short passes to run and get into a position block in space and has shown an ability to lead convoys downfield. In the run game, he plays with an edge to him that allows him to wear defensive tackles all game. He mauls lineman when he gets the chance to in the run game and I would certainly categorize him as a block finisher. He's extremely heavy handed when he is trying to initiate contact with his punch and has pancaked quite a few defenders with just his arm strength alone. He's a devil for linebackers and safeties in the second level of the defense as he knows how to take great angles on blocks against more agile defenders and looks to level for highlight reels. Luke Fortner was in charge of making calls at the line for his team and recognizing defensive movements and plays and did a very good job of it in his lone year at the position, showing an enhanced development and an exceptionally high football IQ. He brings great versatility to the position with teams able to change him to guard in a pinch if need be given his previous experience. He's a tough and rugged center that played in the SEC against the biggest and the baddest defensive lineman college football has to offer and certainly held his own which shows his competitive fire and ability to play at the next level.

He will need to bulk up a bit to consistently win in interior pass protection as he struggled in college on occasion with dealing with massive interior lineman that can beat him with pad level and power. 2021 was his only season playing center after three previous seasons playing guard and playing center in the NFL could be a difficult transition. His punches can be inaccurate when engaging defensive tackles and it has caused him to lose more than a few battles against lineman that know how to win with hand usage. His height has been his downfall most of the time as he loses the leverage battle quickly with his inability to lower his pads effectively. He has struggled against speedy defensive tackles that can beat his agility out of the stance and has fallen victim to swim moves on more than one occasion. He pops straight up out of his stance too often at the snap of the football and learning how to stay low from start to finish will have to be attained through extensive reps. His lacking pad level can also mitigate his ability to drive lineman off the ball to open up holes in the trenches. He gets stymied in his run blocking far too often due to lacking pad level and unless he can win early in his rep, runs have at times gone nowhere. He got beat quite a bit against Georgia and especially Jordan Davis and company and while everybody they faced had a rough day, Fortner's performance stands out. HIs offense is mostly a run based quick pass offense that is rarely used in the NFL and he may be pigeon-holed in terms of scheme that he can play the center position in.

Fortner did what all NFL coaches want to see prospects do and that is take the opportunity to play and run away with the chance which is exactly what he did after the previous center, Drake Jackson, left to play in the NFL and even though Fortner was relatively new to the position he still found a way to make a major impact on the team. He may need to switch back to guard because of his size but if he can polish his game up and gain some weight, he could be a decent player in the NFL.