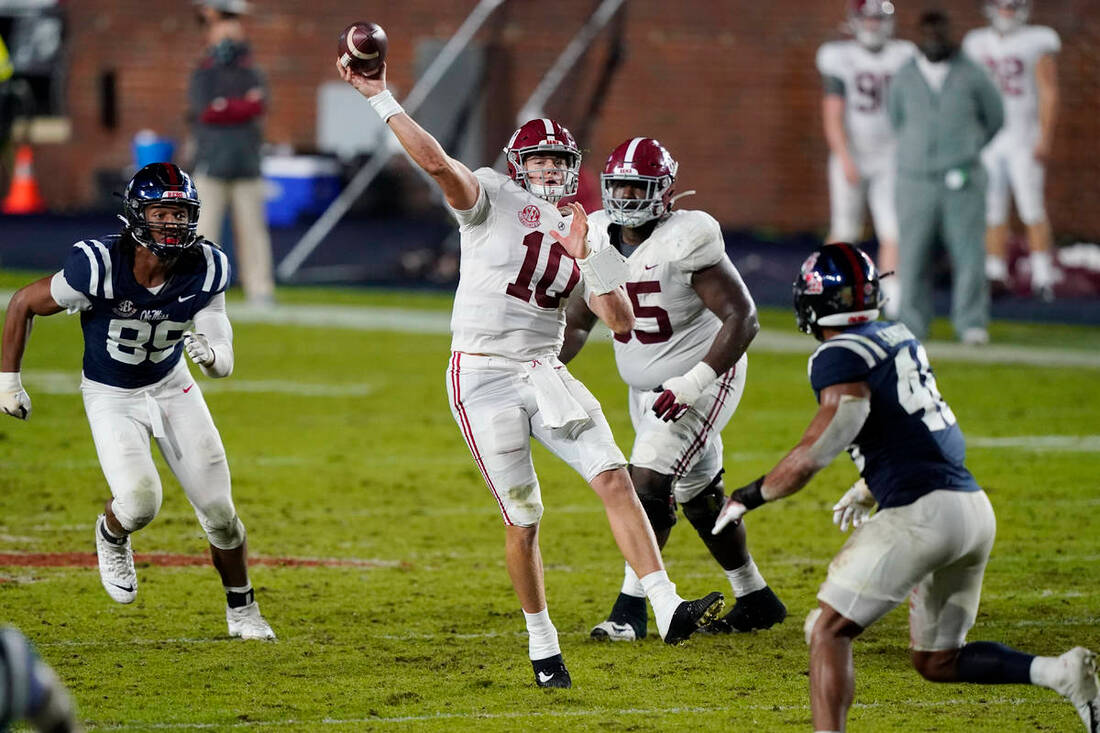 Mac Jones took home the College Football Championship in 2020 quarterbacking one of the best offenses in the country and has earned enough hype and praise from around the NFL to crack into the top 5 quarterbacks in the draft. At 6'3'' and 215, Mac Jones brings great mechanics and tremendous competitive fire. One of Mac Jones's most impressive attributes coming into the draft will be his accuracy on intermediate and deep throws as he seems to pinpoint the football and hit his receivers in perfect stride. He's an incredible decision maker in the pocket and rarely throws errand passes into bad situations in 2020. Took over the job in 2020 as Alabama was ready to give the starting role to someone else before him and never looked back. His mechanics will be what stands out to most offensive coordinators in the NFL because he's textbook perfect as he rarely misses a step or throws off balance. His poise under pressure is highly impressive, rarely scurrying from the pocket until he has to and he has shown an ability to throw on the run accurately if need be. He's one of the better pocket passers in the draft who knows how to move in the pocket without having to break out. He has great touch on his passes as they seem to float into his receivers hands and he rarely finds himself putting too much power into his passes. Consistency is one of his best attributes as he rarely found himself having an off game in his college career. He proved himself as a leader in 2020 while commanding one of the most talented offenses in the country, earning the trust and respect from his teammates and coaches despite having played sparingly before 2020.

Among the other top 5 quarterbacks in this draft, Mac Jones possesses one of the lower ceilings as his below average athleticism and arm strength are going to turn scouts off of him when drafting a franchise quarterback. He has shown to be a slow runner out of the pocket and if he takes off he will get caught. His arm strength is average as his throws will lose their mustard the deeper they go. He has only started for one year in college football and while he did take home the title in 2020, another good year in college would have cemented him as top quarterback. It's very easy for a quarterback like him to remain consistently dominant in college football when throwing to a Heisman trophy winning receiver in Devonta Smith and a freakishly fast playmaker in Jaylen Waddle who both have scorched defenses since they entered college football. He also played behind one of college football's most impressive offensive lines and had one of the best running backs in college, Najee Harris, constantly giving defenses nightmares in the running game.

If you are a team looking for a promising game manager later in the 1st round then Mc Jones is your guy. He reminds me a great deal of Alex Smith without the athleticism coming out of college and while I think he's not going to win many shootouts in the NFL I know he's not going to lose your team any games when you have the lead and that's a quality that can take a good team far into the playoffs.