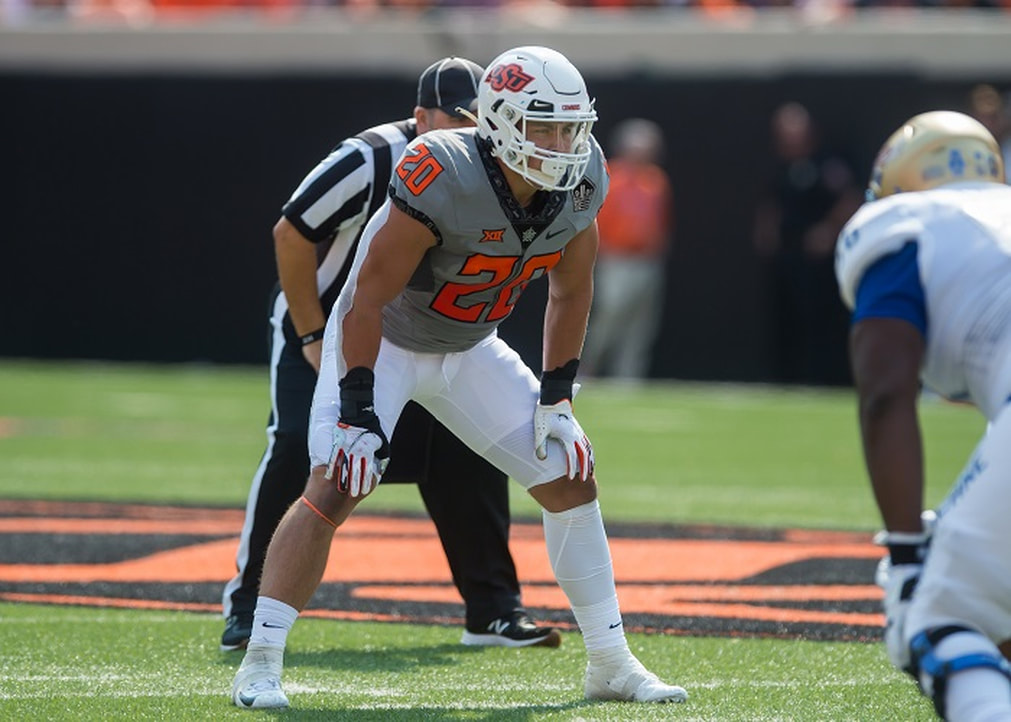 Photo by Brett Rojo-USA Today Sports
If there is a player in this draft that in my opinion is getting disrespected by NFL scouts and teams unwilling to do their due diligence on a player it's Oklahoma State Cowboy linebacker Malcolm Rodriguez whose play the last couple seasons has been nothing short of spectacular for his team. At 5'11'' and 235 lbs., Rodriguez brings elite athleticism, elite football IQ, and tremendous blitzing capabilities. In run defense, he shows a tremendous ability to weave through traffic in the trenches to make tackles in the rush lane. He's great at recognizing blocking schemes early in their development and never seems to find himself out of position in the run game to make a play. He tackles head on with fearlessness and vigor and can hit like a cruise missile when he gets lined up well enough. He's exceptional at establishing tackling angles in pursuit as well as in the hole and when he has a grip on his target, he doesn't get broken away. He attacks very close to the hips as a tackler and his wrestling background helps a great deal with planting his feet to drive upward or running through them and basically establishing a double takedown slam. He attacks the football relentlessly in his tackling attempts and has had 13 total forced fumbles in his career with 11 coming in his last two seasons playing linebacker. He has plenty of range to attack plays from each sideline and takes excellent angles on long plays to ensure he can bring his opponent down before a big play takes place. As a blitzer, his ability to weave through traffic in the trenches helps him greatly both as a pass rusher and run defender. He's fluid and flexible for a linebacker with his size and has shown an ability to squeeze through gaps in the line quickly and contort his frame to get his hands on his targeted ball carrier. When takes on blockers as a blitzer he does a great job of hitting them head with tenacity and violence to quickly engage and then work to disengage once he finds his target. He had a huge jump in 2022 in tackles for loss which suggests that he can quickly develop in various areas of his game heading into the NFL. In pass coverage he does a nice job in zone to cover his area with good range and his ability to tackle quickly helps him limit any yards after catch by receivers in his area. He's pretty good about trying to bat away passes when they are in his area and became much better at defending throws at his linebacker position. He possess an elite football IQ at the linebacker not just because of his ability to diagnose plays with excellent consistency and learn offenses throughout a game quickly but also because he's only been a linebacker for two seasons at Oklahoma State after converting from the safety position the middle of his college career which shows his rapid development capabilities, work ethic to become a better player, and how much of a team player he is. He's as tough as a two steak and teams looking for a reliable run defender that can captain an entire defense needs to have this man at the top of their list.

He's short for the position and possesses a relatively short wingspan for his size and while that certainly has its advantages in wrestling, in football it can have some major consequences especially as a tackler on occasion. He relies heavily on his ability to square up and attack low at the waist to make tackles and if he can't do so he can often struggle to bring down his opposing ball carrier. I worry about his ability to separate from blockers in the NFL due to his issues with his length and may need a defensive line that can effectively create havoc in the trenches so that he can squeeze through holes in the line. His coverage ability can leave a lot to be desired at times as he can be late to recognize patterns or react to passes in his direction and unfortunately for him he played in the BIG-12 conference with some of the most pass happy teams in college football and this flaw of his was exploited quite a bit, which would explain his move from safety to linebacker for OSU.

Malcolm Rodriguez's move to linebacker saved his football career after struggling at safety early on and I couldn’t imagine a player fitting into a role more seamlessly than he did for the Cowboys. He’s got the right background, athletic traits, and toughness to be a reliable starter at linebacker in the NFL and if teams can get past his size limitations as a linebacker they will see a prospect that has Roquan Smith, Bobby Wagner capabilities at the position.