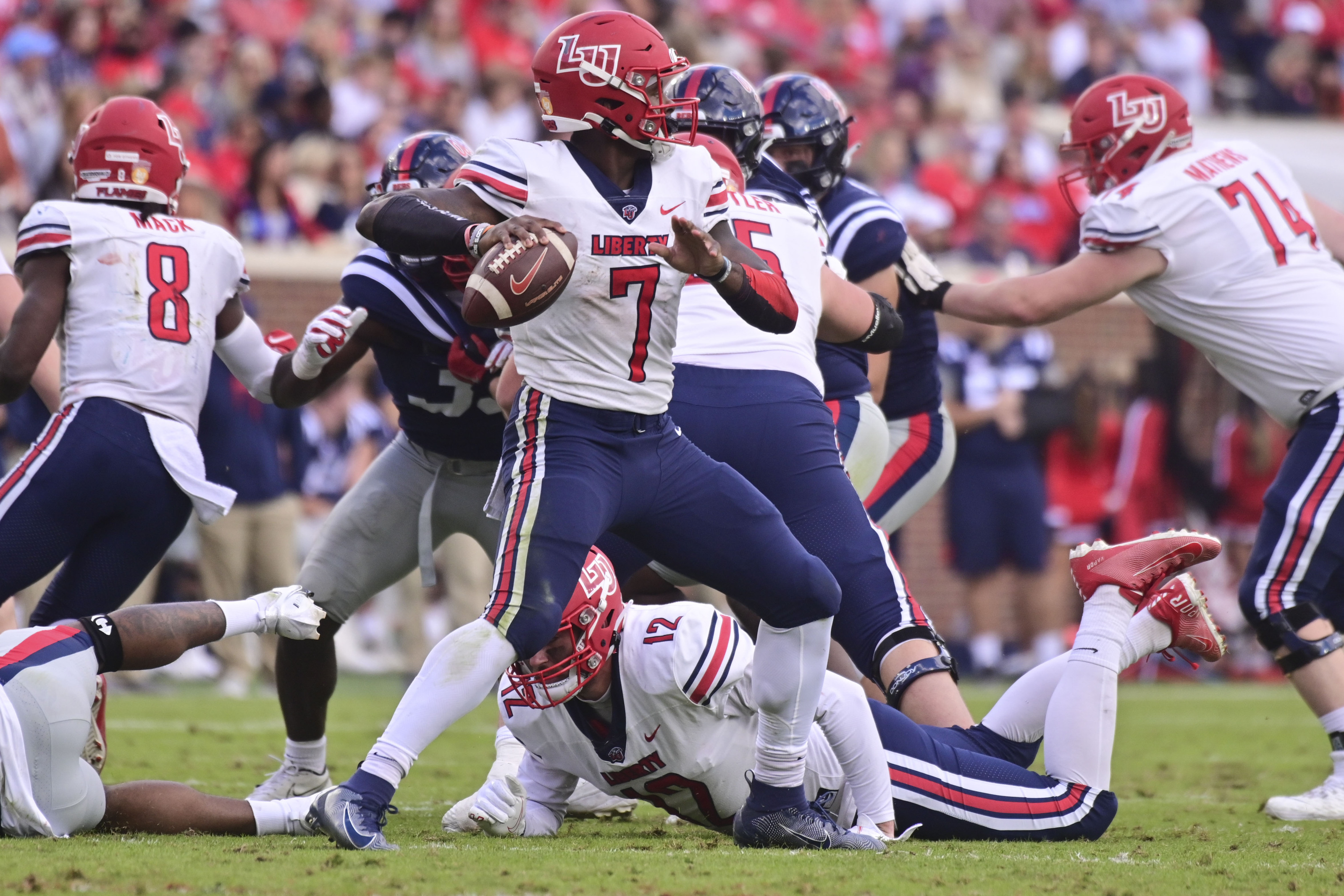 Photo by Matt Bush-USA Today Sports
Every draft seems to have at least one highly enticing dual threat quarterback coming out of college and this year's dual threat king is Liberty Flames quarterback Malik Willis. At 6'1'' and 215 lbs., Willis brings exceptional athleticism, arm talent, playmaking ability, and leadership skills. Malik Willis is the best dual threat quarterback to come out of college since Lamar Jackson and once the NFL combine starts March 1st and we see Willis's athletic traits attached to numbers and measurements, he could skyrocket up draft boards. Athletically, like I said, he's got Lamar Jackson potential because their wasn't play that I watched where I didn't he could take off and score a touchdown with his legs because he can run, juke, spin, and power through tacklers with the best them and it's why NFL teams have him on their radars. He's taken over games by simply running out of the pocket and picking up the line to gain more and more and with 13 touchdowns in 2021 by using his legs, you can tell he knows how to make the most of his carries. He's capable of juking defenders in the open field or in the phone booth which is especially useful for him against the blitz. He can quickly spin, like Lamar, to avoid incoming tacklers or get himself out of the pocket. He's a very strong 215 lbs. with a very muscular build and he has had great success running through arm tackles and powering through would-be tacklers to pick up extra yards or break free all together. As a pocket passer, he's really improved each year when it comes to going through his progressions in the pocket and being too tempted to take off after his first read fails and it was a big reason for his uptick in production in 2021. He showed more of a willingness to stay in the pocket in 2021 and throw from a stationary platform rather than getting outside with his feet and while his accuracy and interception totals went in the wrong direction a bit, his comfort in the pocket increased and continual snaps will certainly help his confidence and performance in the pocket. He's one of the best quarterbacks in the draft when it comes to throwing on the run considering that he's had plenty of practice doing it with his ability to make plays with his legs. He can turn into the "Sundance Kid '' when he gets outside the pocket and if you have seen the move, he can throw with much better accuracy when he's moving than when he's in one place. He can hit his receivers in stride when standing in the pocket or throwing on the run and its' where a significant amount of his production in the passing game has come from. Liberty did use him in designed runs given his phenomenal athleticism and he was highly successful on such plays and NFL teams I expect would have a similar game plan for him. As an arm talent at the quarterback position he clearly has a big arm for a player his size and when he throws the football it rockets out of his hand. He can hit all three levels of the field with ease and that's from in the pocket as well as out of it. As a leader of men, he's one of the best in the draft due to his maturity, selflessness, and ability to rally his teammates. There have been multiple reports that have come from Liberty about his presence in the locker room was one of confidence and players gravitated towards him when faced with adversity on the field. He's a remarkable competitor and possesses a great work ethic both on and off the field and the team that drafts him can expect him to spend immense time trying to get better.

Malik Willis is a raw quarterback prospect that needs heavy coaching in all phases of the position that involve his throwing mechanics, pocket presence and awareness, and decision making. His best attribute are his legs and, like many of the dual threat quarterbacks before him, he wants to use those as much as possible which can get him into trouble as well as get him out. When he sees pressure he wants to take off and run for big yardage and in the NFL that's often a very bad idea with the experience and intelligence of NFL defenders. He's stripped or sacked behind the line on a few occasions by opposing defenses in college and in the NFL if he tries to play hero ball when getting pressured it will likely turn devastating.  His throwing mechanics need work as he's too often throwing on his toes with his propensity to want to take off and run for big yardage. His willingness to take on contact could be an issue in the NFL because while he does have the necessary athleticism to make NFL defenders miss as well as enough strength in his frame to run through tackles, I worry about his longevity in the NFL if he makes this a substantial part of his game. Liberty isn't the best school in the country and they don't play Power 5 schools very often, the only Power 5 teams they played were Ole Miss and Syracuse and lost both, and I worry about the transition of talent from his FBS Independent schools to the NFL. He had a simplified offense at Liberty with a lot of designed spread offense and RPO and that offense in the NFL simply hasn't come to fruition and he may need a creative offensive mind to truly maximize his talent. Relies on his receiver to get open and wouldn't categorize him as somebody that can thread the needle. He's too eager to leave the pocket when the blitz comes rather than simply stepping up and avoiding the rusher and this can force into some risky situations. He's going to need a stellar combine to truly show off his skills

Malik Willis's decision to transfer from Auburn and head to Liberty for a starting quarterback job is the whole reason the transfer in college is good for the NFL because in all likelihood Auburn would have tried to convert him to a different position and we wouldn't have seen his potential as a starting NFL quarterback. Willis needs a lot of work to become a quality starting NFL quarterback but every team in the NFL is hoping they can land the next Michael Vick or Lamar Jackson and Malik Willis has the potential to become one of those types of players. He'll need a smart NFL offensive coach and a phenomenal quarterbacks coach to get him to reach his full potential but his traits and skills to make magic happen with his feet make him worthy of an earlier pick either late in Day 1 or early Day 2.