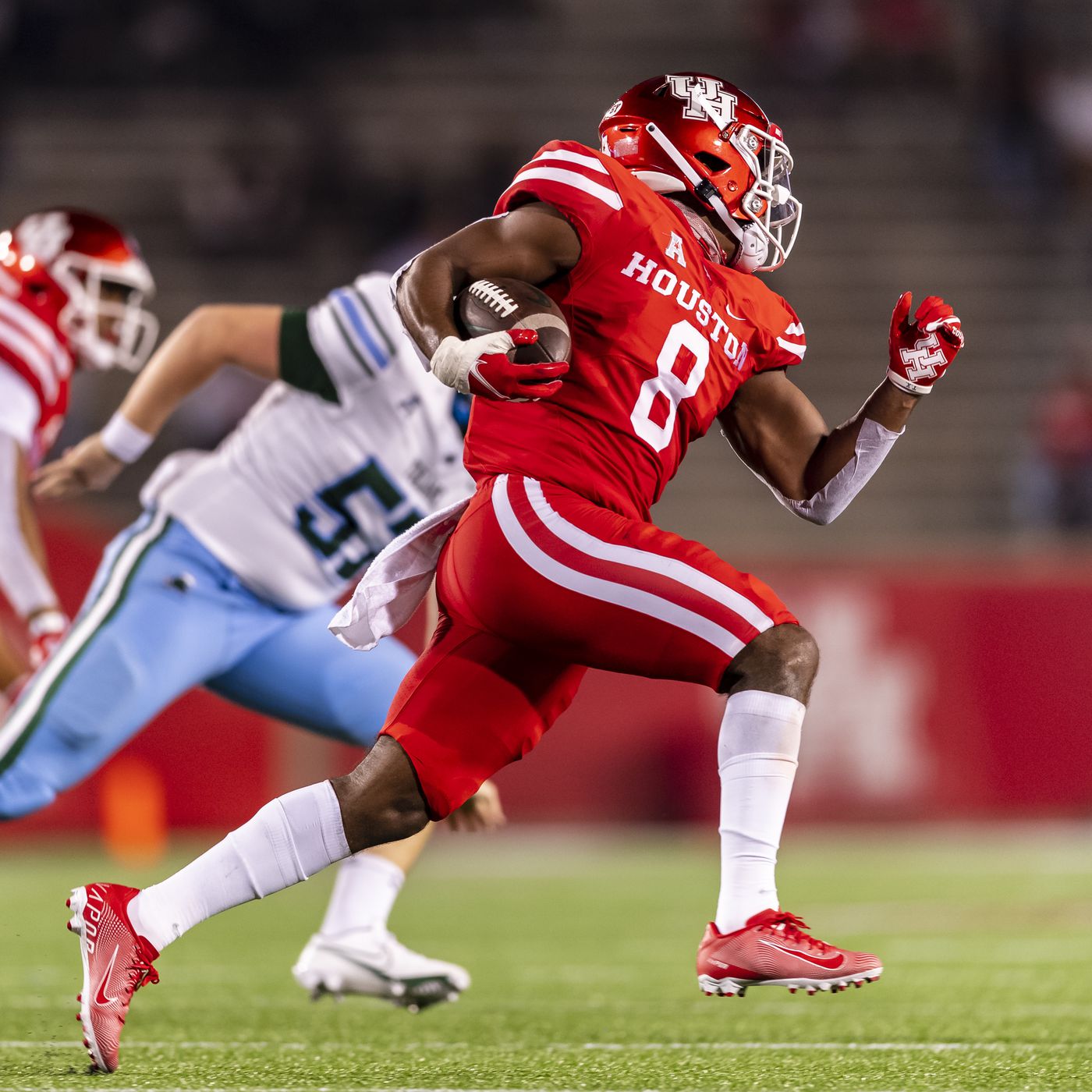 Photo by Maria Lysaker-USA TODAY Sports
Of all the defensive backs in this draft class there is no bigger "playmaker" among them than Houston's Marcus Jones who might be the most dangerous defender in this draft with a ball in his hands. At 5'8" and 185 lbs., Marcus Jones brings elite athleticism, rare ball skills, elite playmaking ability, and phenomenal toughness. There isn’t a more exciting defensive back to watch in college football in 2021 than Jones with his ability to not only take the football away but do magical things when it's in his hands and this often forces quarterbacks to be very careful about throwing the ball in his direction. In man coverage, he displays elite agility, speed, and explosiveness in coverage.  He's very good at recognizing routes early in a receiver's route progression and does a great job not falling for stutter steps or sluggo's. He's very good at sticking to his receivers on their routes with his exceptional footwork and quickness and rarely has found himself out of position to make a play on the pass. He doesn't grab downfield or get handsy after the 5 yard mark which helps him prevent getting pass interference calls placed upon him. He's very good at undercutting routes in man coverage as he can disguise his speed and explosiveness until an opportunity presents itself and has found major success picking off throws and defending passes. He's an exceptionally fluid man cover corner that makes keeping up with receivers look incredibly easy and on the rare occasion he gets burned, he can turn on the afterburners and make-up ground quickly with his elite athleticism. In zone coverage, this is a cornerback who thrives at reading the offense and the cornerback and jumping routes which is exactly what he did for the Cougars. He plays with elite timing in zone coverage to jump the football at the right opportunity and make plays with it. He's very good at diagnosing routes very early in zone coverage and covers a very large area when he's roaming his zone. His elite athleticism gives him excellent range to make sideline to sideline coverage ability in zone, so much so I wouldn't be shocked to see teams try him out at safety in training camp as well as corner. He's good at bursting on the pass when it's thrown into his area code and if he doesn't get to the ball in time, he can at least try to contest the catch or make a tackle. While he's not much of a threat in press coverage, he does make slot receivers' lives difficult at the line with his aggressive style of play to knock them off their routes as well as his ability to stick to them like glue all over the field. He punches above his weight for a cornerback with his extremely aggressive tackling style and fearlessness to tackle running backs that have at least 40+ lbs. on him and it's beyond admirable to watch a guy like him make those plays in run defense. This is a cornerback prospect that you do not want to bad passes at because his ball skills are among the best in college football. He possesses elite hands that can catch passes way outside his frame and made many quarterbacks regret throwing passes in his vicinity in 2021.To paraphrase White Goodman from Dodgeball: An Underdog Story, Marcus Jones is the deadliest man on earth, with a football because like I said in the beginning when he has the ball in his hands he can do some magical things. He was the most dangerous kick and punt returner in college football with an ungodly nine touchdown returns with a shocking 34 yard return average in 2021.  He's a highly versatile prospect with snaps at outside cornerback and slot corner as well as ample snaps on offense due to his ridiculous return skills that can make him a dynamo offensive weapon trick plays, which not only shows his athletic prowess but his high football and overall intellect to be used anywhere the head coach needs him. He's also a clutch cornerback who makes the plays that need to be made to keep a game alive or end, just ask SMU when he took a kick return to the house with 27 seconds left to end the game and give the Cougars a win. He plays with rare competitive fire and toughness and teams in need of a player that can change games for them should have this guy very high on their board.

His size likely delegates him to more of a slot corner or perhaps even a free safety role which typically doesn't get prioritized by teams. He struggles to force incompletions at the catch point due to his lacking length and size and has been mossed on more than a few occasions because of this. Tackling can be an issue for him as well as his ability to wrap and bring down ball carriers efficiently can be questionable at times due to his length and lack of size. Played outside cornerback a majority of his career with some snaps in the slot and while he played very well in the slot when given opportunities it could be a learning curve early in his career. His all gas no brakes style of play when making tackles and plays, while admirable, could test his overall durability as an NFL pro. Houston doesn't play a great deal of Power 5 schools so his overall production comes against lesser competition and while that isn't his fault, he'll need to show in workouts and at the combine that he's on the level of other top prospects in the draft.

Few cornerback prospects are as dangerous and electric as Marcus Jones and if he were playing for an Alabama, Ohio State, LSU, or Clemson he'd absolutely be a top 15 pick in the draft but because he plays for Houston and lit up lesser competition he'll have to prove more heading into the draft process. His elite athleticism, playmaking ability, technique, and toughness make him a fringe Day 1 selection in my opinion even if teams look at him primarily as a slot cornerback in the NFL. He's a Day 1 plug-n-play slot cornerback in the NFL and with a creative head coach that knows how to use his return skills on offense, he could be a pro bowl cornerback and return man early in his career.