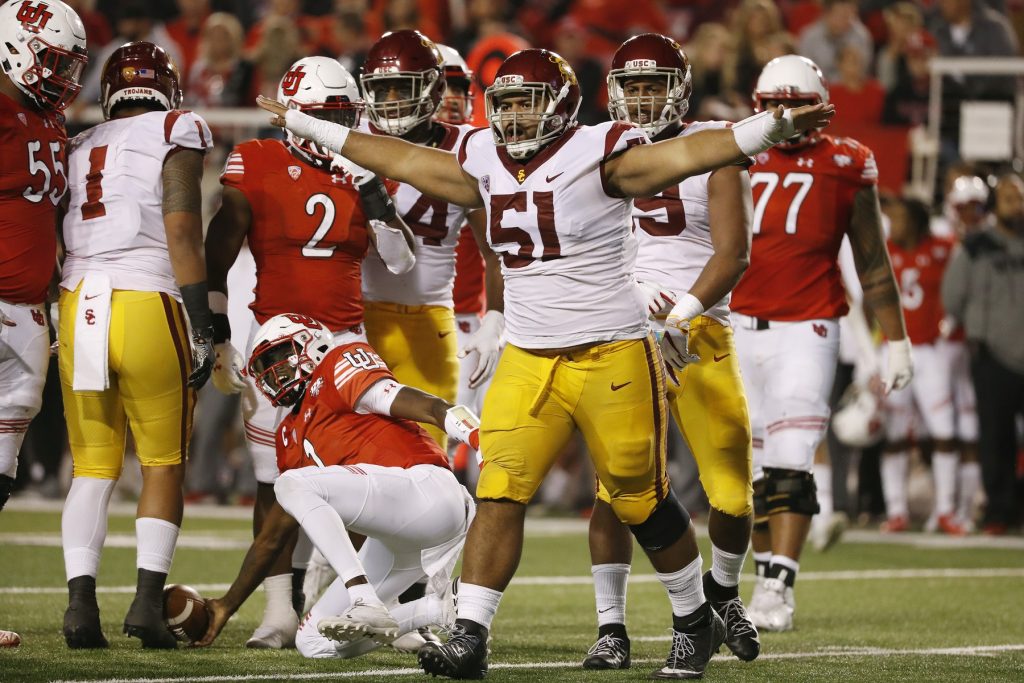 USC features a lot of defensive talent in this year's draft and Marlon Tuipulotu is no exception. At 6'2" and 310 lbs., Tuipulotu brings prototypical size and surprising athleticism to the defensive line position. He's as explosive as you can be for a man his size and it's very difficult for offensive lineman to handle early. He plays with excellent pad level and shows impressive power when driving up field. His speed-to-power conversion when penetrating the backfield is exceptional and should be a problem for NFL offensive lineman early in his career. He's surprisingly fast and agile for a defensive lineman and has the ability to give chase to ball carriers in the backfield and bring them down. He has a great understanding for play development, especially against the run, and can effectively collapse running lanes as well as disrupt screen passes. He has very fast hands and does show an ability to hand effectively in the trenches. He had a great bull rush that was very difficult for PAC-12 offensive lineman to handle and did a great job of opening up holes in the trenches to allow blitzers to come through. He has a very powerful upper body and a menacing punch off the snap that can jolt offensive lineman. His grip strength is very powerful and whether driving his opponent off the line or arm tackling running backs, his grip never seems to break. He's a very big hitter as a defensive lineman as well and will ring a ball carrier's bell if he gets a clean shot. He's a very competitive player who brings a non-stop motor and a lot of effort to the table.

He was second fiddle to Jay Tufele on the USC defensive line and mainly ate up blocks for his fellow trojans. He doesn't possess any pass rush moves when attempting to get into the back field, mainly relying on his intensity and bull rush to make plays. He mainly served as the 1-tech in the Trojans defense and I was a bit shocked that he wasn't productive in that role, given his talent. He has short arms and they can hurt his ability to get up field if an offensive lineman gets into his pads early. He can at times be too eager to attack the first guy he sees on play action as well as read option and can leave his team vulnerable. His size limits his versatility and playing outside of a 4-3 scheme would be a detriment to his career.

Marlon Tuipulotu is a plug-and-play 1-tech in a 4-3 scheme in the NFL with the potential to become a 3-tech if he can further develop as a pass rusher. His explosion, athleticism, and relentless style of play is conducive to minor success in the pros but if he can put his game together so more, he will be a quality NFL player.