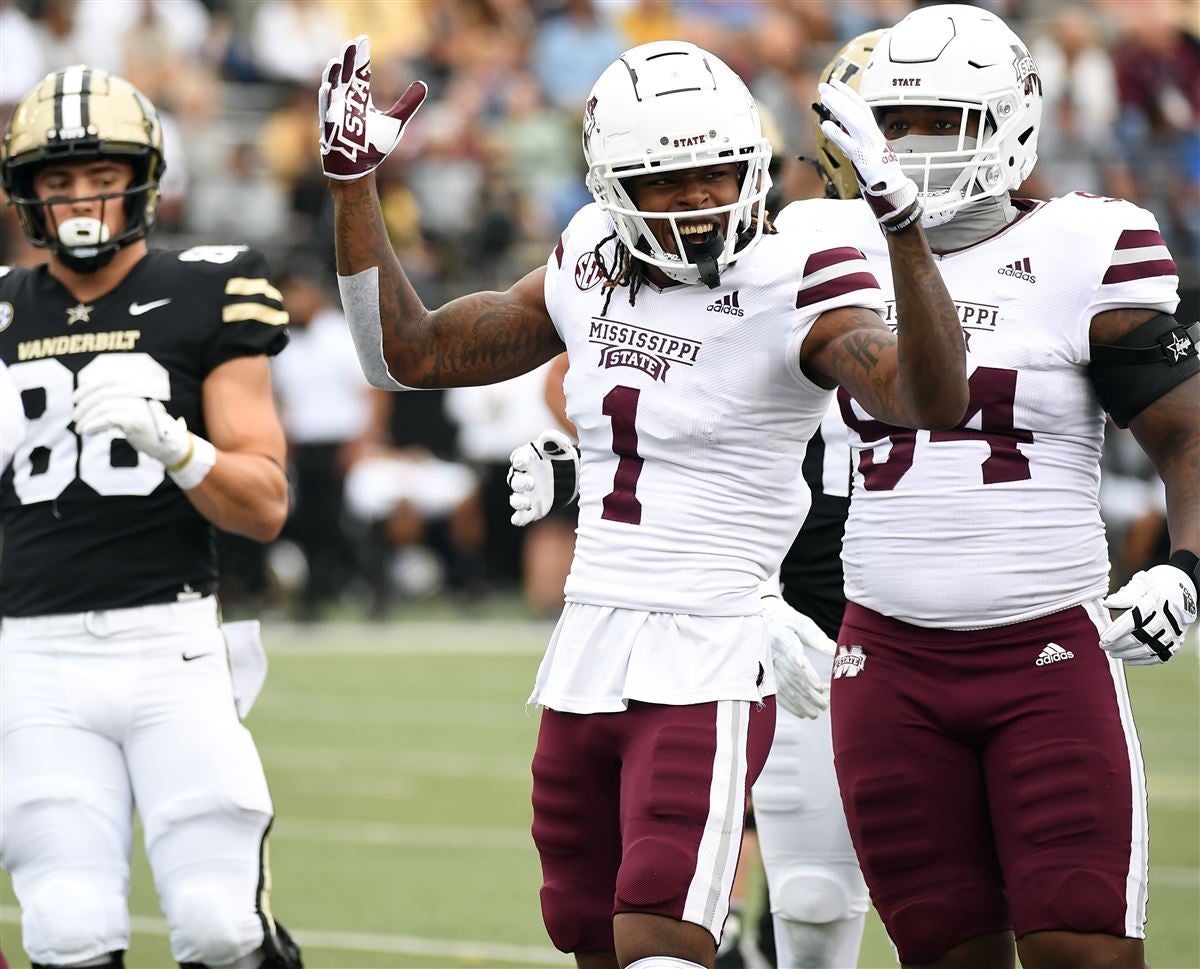 Photo by USA TODAY Sports
Mississippi State every year seems to put a good defensive prospect in the draft with Jeffrey Simmons and Johnathan Abrams being a few of note and Martin Emerson has certainly emerged this season for the Bulldogs. Martin Emerson brings exceptional size at 6'2'' and 200 lbs. with a phenomenal wingspan and exceptional technique. He proved in 2021 to be one of the most difficult corners to throw against due to his physical attributes and offenses in college football stopped trying to test him early in the season as many of the passes thrown his way were off target and overthrown. In man coverage, Emerson clearly understands how to properly use his excellent length to close-off passing windows and blanket receivers downfield. He has very technically sound footwork with a good backpedal which allows him to limit false steps in coverage. He's very good at sticking to his receiver downfield and does a great job of his length. He's very good at dealing with bigger receivers that rely on bullying through corners to come away with catches which is where his size and length are at their most effective. He's sticky downfield without being grabby which shows excellent awareness and football that allows him to limit potential pass interference calls. He clearly was given a role by his defensive coordinator which was to not give up any deep balls, likely due to average speed, and did a great job only allowing short passes with the amount of cushion he would receive from receivers. In zone coverage, he displayed phenomenal spatial awareness and reactive burst which helped him deter passes thrown into his zone. He clearly can diagnose routes early in their progressions and seems to always be in the right position to make a play. His exceptional size and length forces quarterbacks to arch throws over him and with his coverage skills allowing him to properly guard his zone with biting on routes early, he often forces quarterbacks to look elsewhere. He can line up in tight end zone coverage with his size and is very effective at making any catches. When burst on the football he does a nice job of targeting the catch point rather than making tackles and his 2020 season saw him do this on a regular basis with 13 passes defended. He's at his best in press coverage where his physical traits are fully utilized. He's very good at jamming receivers at the line and forcing off their routes, both against bigger receivers and smaller ones. He's very aggressive on their routes by bumping and grabbing them within the legal bounds of the rules which often  forces them to arrive late to their spots, resulting in incompletions. He's excellent at forcing receivers towards the boundary line down field and often shrinks their landing pad on jump balls, leading to passes out of bounds of receivers struggling to get their feet down. He's a very willing and good tackler for a cornerback with plenty of practice given how many short throws his coach makes him force. He does a great job of trying to punch the football out when making tackles and while he's only been successful on one occasion, the effort and consistency is what coaches want to see. He possesses a very high football IQ based on his development and technical prowess at the cornerback position.

He's not going to blow you away with his athleticism and will likely need a strong showing at the combine to get on teams radar come draft day. His scheme is blamed for lacking ball production but considering his counterpart in Emmanuel Forbes Jr. has immense success taking the football away for the Bulldogs, his ball skills should be questioned. He has shown issues dealing with speedy receivers on deep balls and often has to rely on safety help, Alabama's Jameson Williams and John Metchie III absolutely torched him on a couple of occasions which showcased his lacking top end speed. Not a versatile cornerback prospect with his only position in college football being an outside cornerback. He's not the most agile cornerback given his size and athleticism and twitchy-quick receivers that can outmaneuver on short routes have and will give him trouble at the next level.

Martin Emerson was a rock on the Mississippi State defense with his technique and size at the position and NFL teams looking for press-man corner with an above average floor for a prospect would be wise to have him high on their board. He's not going to blow you away athletically but his smooth footwork and length will make up for any shortcomings in the athletic department of his game. I expect him to be a rookie year starter and gradually develop into a good outside corner in his career.