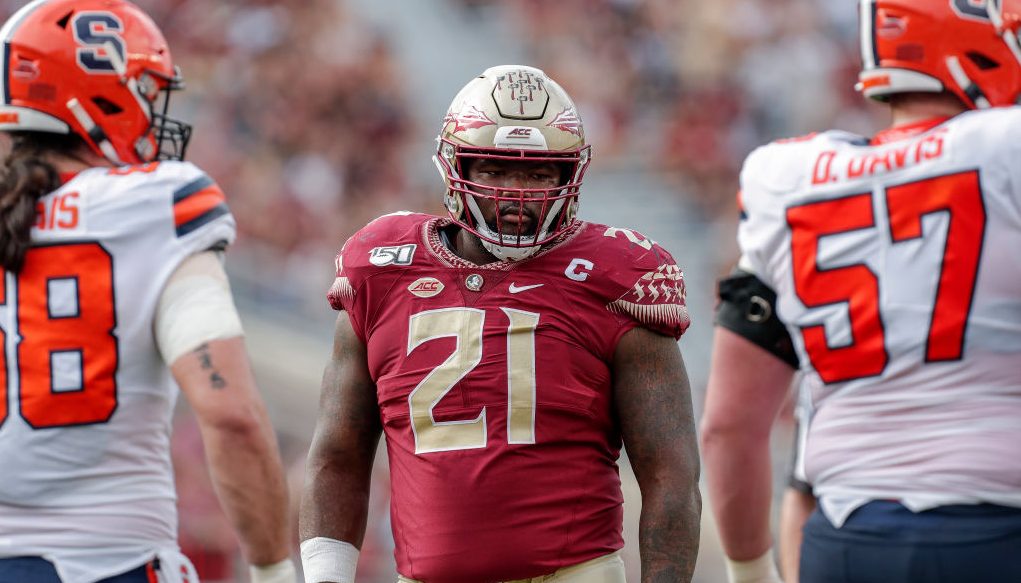 There may have not been a more ferocious and violent defensive tackle in college football last season than Marvin Wilson and if he can put his technique and athleticism on the same level, he could end hearing his name called in the top 5 of the draft. The first thing you notice about Wilson on tape is just how explosive he is for a 6'5" and 315 lbs. defensive tackle. He was a 5-star recruit coming out of high school and has certainly met and exceeded expectations. He comes off the line of scrimmage with so much force that offensive lineman are usually 5 yards into the pocket before they can get a handle on him. His motor run white-hot all game and his effort has made him one of the most feared defenders in the ACC. His punch is one of the best in college football and shows how unreal his upper-body strength is. Always seems to be the low man in trench battles and is a constant presence when collapsing the pocket. He has a very effective swim move and violent club and chop move to get into the backfield and make a play. He's been the center of attention for college football offenses since arriving at Florida State and has shown improvement each year he's been there. He has enough athleticism to line up anywhere along the defensive line and be productive. He's an alpha in the locker room and a tremendous leader on the Seminoles as seen when his coach lied to the media about a racial discussion the team had and he led the charge with his team behind his back to confront and excoriate his coach.. He's got long and powerful arms that can bull rush even the best guards in college football. Clearly the anchor of the Seminoles defense and the difference in how they play is very noticeable when he's not playing. He destroyed Louisville in 2019 showing just how dominant he could be if a team leaves him unchecked. He's got very impressive speed and agility for a big man which can be seen when in run defense. He's got a very nasty and violent side to his game which all teams in the NFL are looking for in a defensive tackle. Wilson can play any position on the line of scrimmage in either a 4-3 or a 3-4 which makes him a target for every team in the NFL and a versatile defensive player in 2021. He's very good at holding his gap and bursting into running lanes to make a play. He does a good job of maintaining good leverage and never seems to be pushed off the line of scrimmage. Very quick to shed blocks and make a tackle on the inside in run defense.

He needs to add more rush moves to the game because he's too reliant on his athletic prowess to make plays. When things break down after his initial move fails he doesn't have much of a back plan outside of effort and athletic ability. He carries some bad weight into his core and I would like to see him shed that weight in 2020. While he comes off the snap with great pad level, maintaining it throughout the play seems to be an issue and it can get him into trouble against more technically sound guards. His season ended prematurely due to a hand injury in 2019 which slightly begs the question about the potential to re-injury.

​He's got the highest ceiling among defensive tackles in the draft with his athletic prowess and nasty style of play. He'll be the leader in a locker room when he gets into the pros and teams always need leaders.