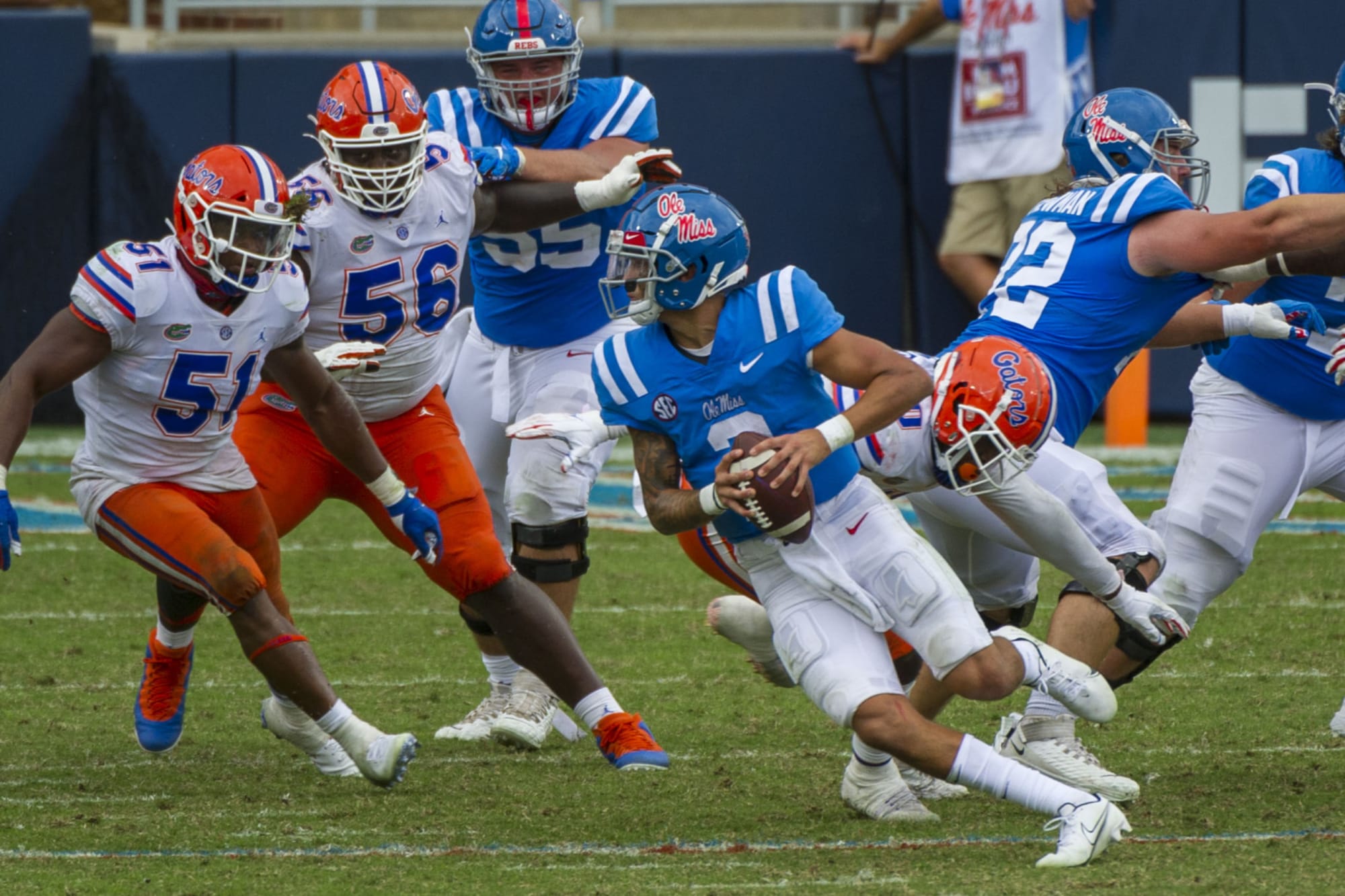 Photo by Justin Ford-USA Today Sports
Matt Corral in 2021 was one of the best available quarterbacks in the NFL draft for quite awhile after going 10-3 and leading Ole Miss to a bowl game against Baylor but unfortunately Corral suffered a ankle sprain and wasn't able to play in his final college football game. At 6'1'' and 205 lbs., Corral brings great accuracy, good athleticism, and mechanics.  Athletically, Matt Corral has proven to be able to move in the pocket and scramble for extra yards to pick up the line to gain. He has excellent pocket awareness to avoid sacks and get into the open field. He's a tough runner of the football when he has to pick up the necessary line to gain and he's made incoming defenders look foolish because he can juke defenders in tight spaces. As pocket passer, Matt Corral plays with phenomenal accuracy on his throws and can thread the needle at all three levels of the field. He has excellent throwing mechanics which he clearly polished up mightily before the season. He has excellent touch on his passes that just seem to float into his receivers hands at times and rarely has he thrown a ball that isn't catchable. He does a great job of going through his progressions in a play and doesn't deviate from the play until he has to. He really improved as a decision maker in 2021 which was a huge reason for his serious drop in interceptions. He takes care of the football in the pocket and did a great job of not taking necessary risks.  He does a great job of not looking at his first read too long and missing his other receivers and it makes him a difficult quarterback to game plan for. When he has to throw on the run, Corral has good enough accuracy to make the necessary throws to keep a drive going. He's very good at sliding when he has to scramble past the line of scrimmage and really does a good job avoiding contact when he can. He's very good at coordinating an offense and can plan hero ball with the best of them when he's on the ball. Matt Corral is a tremendous leader of men on the field and a big reason for Matt Corral's success in 2021 with his ability to rally his teams when faced with adversity and get them to play their best when the moment calls for it. He's a tough quarterback who is willing to take hits in order to benefit his team and can play with a rare selflessness that's almost inspiring. He's an extreme competitor and has a phenomenal work ethic when it comes to getting better.

I don't like quarterbacks of Matt Corral's size running into the teeth of the defense trying to break tackles and make defenders miss for yards because he's certainly not built to take on NFL punishment in the open field and if you need proof as to why Corral shouldn't be a mobile threat in pros, just ask Baker Mayfield of the Cleveland Browns once he gets back from his surgeries. His lacking height could be an issue in the NFL when it comes to batting down passes at the line of scrimmage Matt Corral is quicker than he is fast as a quarterback and I don't expect him to be very effective at running downfield and picking yards with his legs. He has average arm strength when throwing the football and isn't going to be rifling throws downfield very much in the NFL. His size in his hands are average and in cold weather teams may be concerned about his ability to throw footballs in snow and the rain in the NFL. Ole Miss had a pretty good offensive line in 2021 that allowed to get some time to go through his reads and going to a team with an established offensive line could be vital to his success.

Matt Corral has a lower ceiling than other quarterback prospects in this draft but I would say that he has a higher floor than all of them and if I am complete team in need of a quarterback that simply spread the ball around and rely on a run game, Corral would be near the top of my draft board. Matt Corral will need to have his hero ball gene tempered a bit because there is nothing an NFL defender loves more than leveling a quarterback and I think he'll need a decent offensive line in the NFL because I don't see him evading NFL pass rushers the way he did in college. If he gets paired with the team come draft day that has all the pieces to the offensive puzzle except quarterback, Corral could be 2022's version of Mac Jones.