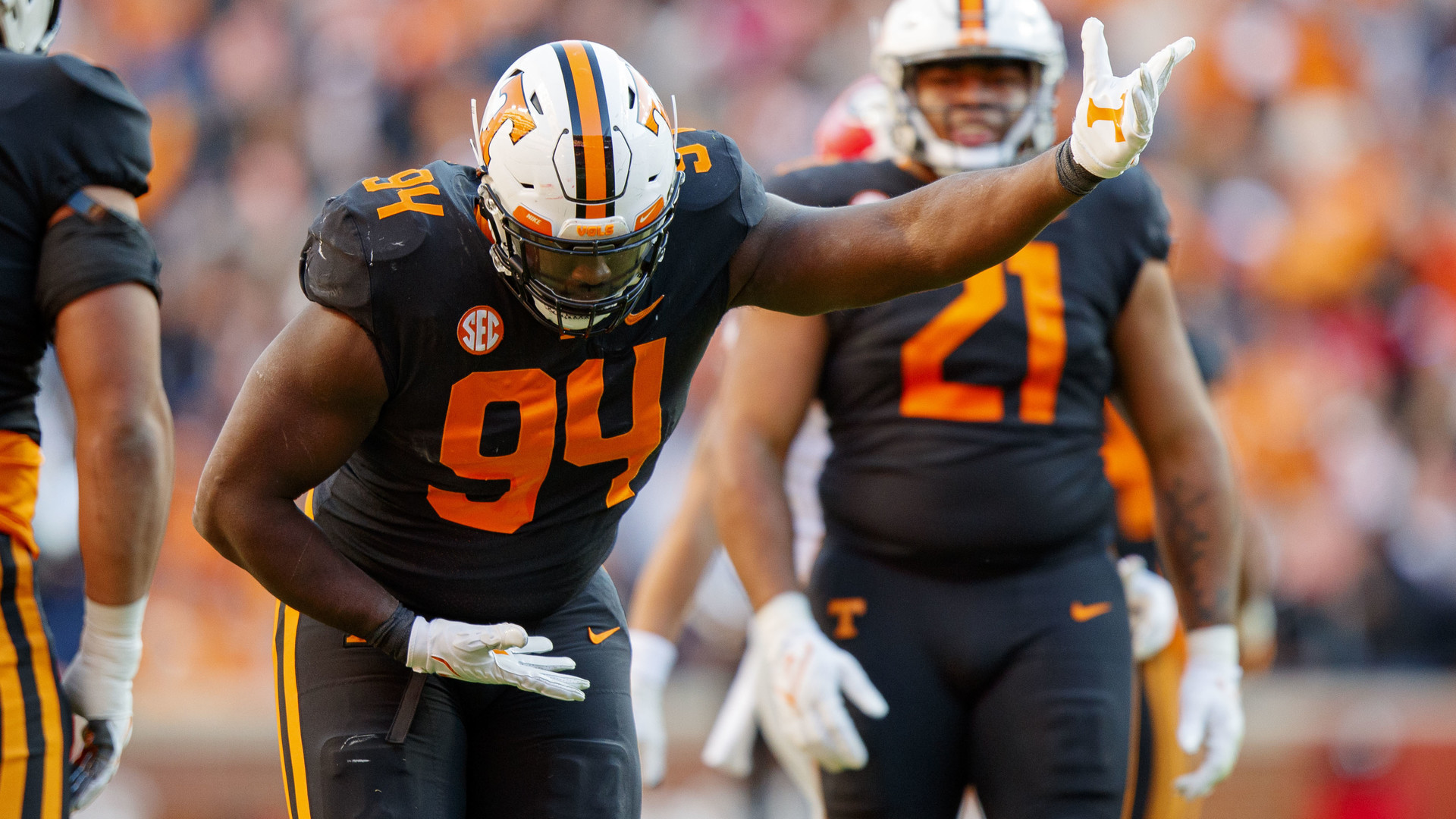 Photo by Caleb Jones-Tennessee Athletics
The Tennessee Vols haven't been the SEC powerhouse that they used to be years ago however Matthew Butler made the program very competitive in 2021 and his efforts were certainly noticed at the shrine bowl and his stock has been steadily rising ever since. At 6'4" and 297 lbs., Butler plays with very good athleticism, nastiness, and versatility. As a pass rusher, he comes off the line with excellent explosiveness and speed and if his opposing lineman isn't on his game at the snap he can get overwhelmed very quickly. Butler's plays with low pads level off the line and does a nice job of establishing good leverage when he engages guards and centers. He comes to each play with a planned rush attack and has enough pass rush moves in his arsenal to make him difficult to block. He's very flexible for a man his size and has proven to be a gap squeezer in the trenches when getting up field. He possesses a very good swim move that's quick and effective off the line and his good length in his arms has allowed him to effectively and routinely beat blockers off the line and penetrate the pocket early. He's one of the best twisters in the draft, beating shorter-armed guards and centers. He has a very good push-pull move at the line that can help him disengage from offensive lineman very quickly once he locks on to the ball carrier. As a run defender, his explosiveness and speed off the line has helped him become one of the best gap shooters in the SEC. He hits gaps in run defense with scary nastiness that helped him create tremendous penetration early in a run plays development which allowed fellow defenders to attack the running back in the backfield. He's great at reading offensive line movements early which allowed him in college to attack the most effective gap and at times to single handedly effect run plays for his defense. He possesses a very strong grip and when he's had to reach out and one-arm tackle running backs he has proven himself to be very good in this regard. He's lined up all over the Tennessee defensive line from edge rushers to nose guard and has shown himself to be a force at every position. He possesses one of the most relentless motors in the draft from the defensive line which has helped him both stay in plays and make plays well after the play breaks down. He's relentless in his pursuit of making a play and has often been seen rushing downfield trying to chase ball carriers fully knowing that he won't be able to catch up. He plays with a no surrender attitude when attacking the line of scrimmage and his effort and play speed should translate very well in the NFL. He had a great game against Alabama in 2021 that saw him viciously attack one of the best offensive lines in football and even though they got crushed, he at least kept them playing competitive football which shows leadership skills and his work ethic. He's a phenomenal competitor, great leader, and tireless worker on and off the field and teams are going to love him in their locker room as they know he'll give 110% when it comes to getting better at the game of football.

Matthew Butler has struggled in the past with dealing with powerful offensive lineman and his lacking power in his frame certainly might be the root of the cause and only 17 reps at the NFL combine certainly puts proof to that observation from his tape. His lacking power affects every aspect of his rush with his ability to stun offensive lineman with his punch, his ability to bull rush offensive lineman, and his ability to disengage. If he doesn't win from his initial first step off the line when engaging lineman he tends to raise his pad level which is due to powerful offensive lineman matching his power and forcing him upwards. His counter rush game can be poorly timed when engaging offensive lineman which comes from his relentless never-surrender from of rushing as well as a lack of practicing his counter rush. I would like to see him use a spin more in his game and especially in his counter because he certainly has the speed and quickness to use one effectively. I would like to see him try and swipe passes at the line more often but his relentless pursuit of the quarterback is likely to blame for his lower batted passes stat.

Matthew Butler is one great pro day away from potentially shooting up into the top 50 of the draft because when you watch him play defensive line you see a player that wants to win games and affect the offense in any way he can. He needs to polish his game up more heading into the NFL and certainly needs to live in the weight room this NFL offseason but if he can build up his power and continue work on his game he can be a very reliable starting defensive tackle early in his career.