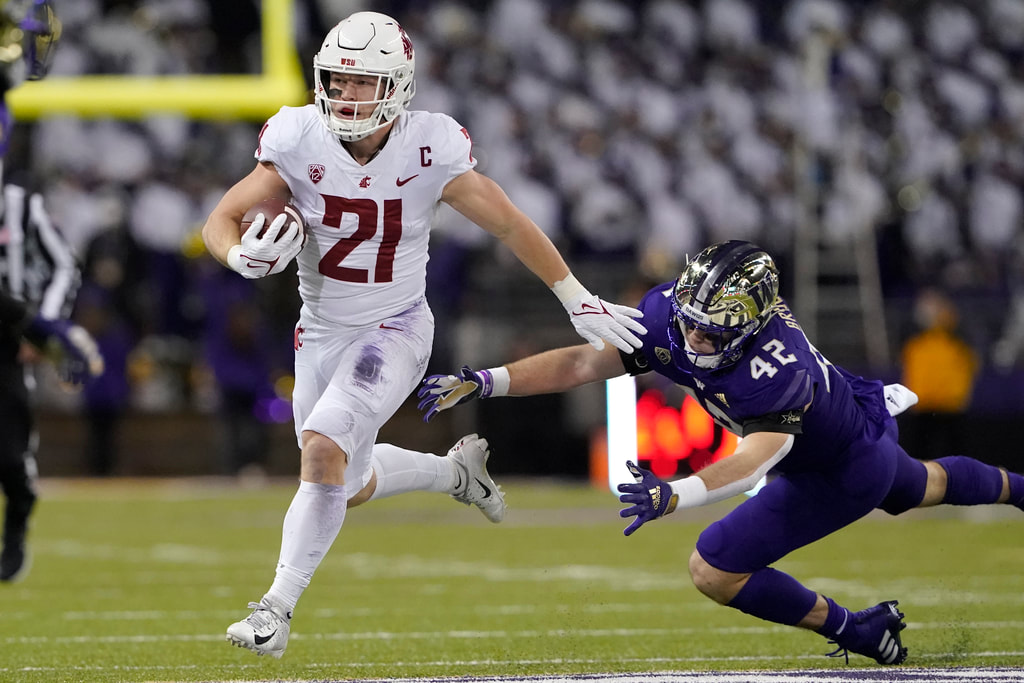 Photo by Ted S. Warren-Associated Press
If there was a Christian McCaffrey clone in the NFL draft this year it would be Washington State running back Max Borghi whose play style and skillset is almost a carbon copy of the pro bowl running backs. At 5'9" and 210 lbs., Borghi displays exceptional athleticism, elite receiving skills, and phenomenal quickness. He possesses a highly compact and muscular Max Borghi possesses some of the quickest feet in the NFL draft which helped him in aspects of his game. When running between the tackles, Borghi possesses very good ball carrier vision as he can see holes starting to crack open and dash through them with exceptional explosiveness. He reaches top speed in milliseconds and has enough jet fuel in his system to burn defenders deep when he has daylight in front of him. He can make players miss on the phone and has excellent contact balance from lighter defenders to keep his feet and keep going up field. He has a knack for making the first tackler miss with his elusiveness and can be counted on to pick up yardage after a catch out of the backfield. Max Borghi might possess one of the best juke moves in the draft as he times it's initiation perfectly and often makes the incoming defender guess wrong. He possesses a very good spin move that's very quick and has helped him get out of jams in the open field. Defenders do not want to meet him in the open field either a catch or a run because he's made mince meat out many in space and this skill set of his could translate well in the NFL. Borghi possesses a very good stiff arm for his size and in 2021 he should that he can effectively shed tackles if he uses it correctly. He's the best pass catching back in the NFL draft and it may not be very close. Borghi has very soft hands that can reel in accurate passes quickly and was highly successful as a safety valve target for his quarterback. He has the ability to run routes for an offense and was an extremely versatile running back for the Cougar as he was used equally in both the run and pass game. He's no stranger to attacking the middle of the defense on short yardage throws and does a great job of getting his head around quickly.

He's not one to shed tacklers off of him, given his small size, and may need to be schemed into success in the NFL. He doesn't relish contact like most running backs with his compact muscular frame and will often shy away from head on collisions by stepping out of bounds. He's not a running back that will run over defenders either in the trenches or open field and I would recommend him as a power run back in goal line situations. Too often can distrust his blocks in the trenches and will often cut out of the lane to find his own hole due to his elite quickness and speed. He wants to bounce his runs outside whenever possible to limit contact and get to the sideline which is concerning when it comes to his overall toughness as a player. He has a small catch radius and even quick screen passes to him will need to be on target. He wasn't used as a blocker in his college career and trying to coach him up to be a reliable blocker may be futile.

Max Borghi has both McCaffrey's strengths and weaknesses heading into the NFL draft but with lack of desire to take a running back high in the draft unless they're a freak, Borghi is likely to fall somewhere late Day 2 to mid Day 3 of the draft. Borghi has highly intriguing qualities to his game with the rare quickness and versatility but his lacking ability to be an effective power runner is likely to cost him. I expect him to compete for the backup job early in camp and potentially find a rotational role on offense by his 3rd year.